Toraja Church is a Protestant Christian denomination in Tana Toraja, Indonesia, of which the majority of the Toraja people are members. [1] This church is a member of Indonesian council of churches since 1950. On 1912-1913 the Gerevormerde Missionary Bond-Holland of the Dutch Reformed Church begun working in this part of the country. On 7 November 1913, Rev. A.A. van de Loosdrecht became the first missionary who came to Rantepao. This time became the starting point when the Gospel was grown in the Torajanese's heart. But, Rev. A.A. van de Loosdrecht was killed in that place. In 1938 there were 14,000 Christians from 300,000 inhabitants there. Formally, Toraja Church was established on 25 March 1947 in Rantepao. [2] In 1995 the church had 300,000 adherents. [3] In 2012 the church had 400,000 members and 959 congregations. This church is the largest in South Sulawesi, approximately 80% of the population belong to it. [4] [5] It is a member of the World Communion of Reformed Churches. [6]

Tana Toraja Regency is a regency (kabupaten) of South Sulawesi Province of Indonesia, and home to the Toraja ethnic group. It covers an area of 1,990.22 km2 and had a population of 221,081 at the 2010 Census and 228,778 at the 2015 Census; the latest official estimate is 231,519. The local government seat is in Makale, while the center of Toraja culture is in Rantepao. But now, Tana Toraja has been divided to two regencies that consist of Tana Toraja with its capital at Makale and Toraja Utara with its capital at Rantepao. 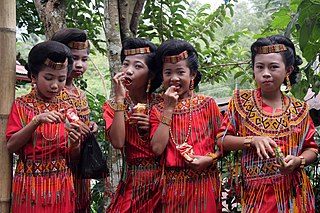 The Torajans are an ethnic group indigenous to a mountainous region of South Sulawesi, Indonesia. Their population is approximately 1,100,000, of whom 450,000 live in the regency of Tana Toraja. Most of the population is Christian, and others are Muslim or have local animist beliefs known as aluk. The Indonesian government has recognised this animistic belief as Aluk To Dolo.

The Huria Kristen Batak Protestan (HKBP), which translates into English as the Batak Christian Protestant Church, is the largest Protestant denomination in Indonesia, with a baptized membership of 4,000,000. Its present leader is Ephorus Darwin Lumbantobing.

Tongkonan is the traditional ancestral house, or Rumah adat of the Torajan people, in South Sulawesi, Indonesia. Tongkonan have a distinguishing boat-shaped and oversized saddleback roof. Like most of Indonesia's Austronesian-based traditional architecture, tongkonan are built on piles. The construction of tongkonan is laborious work and it is usually built with the help of all family members or friends. In the original Toraja society, only nobles had the right to build tongkonan. Commoners live in smaller and less decorated homes called banua. 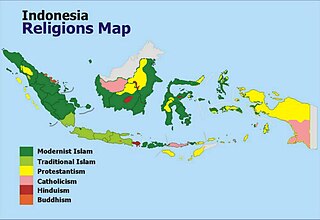 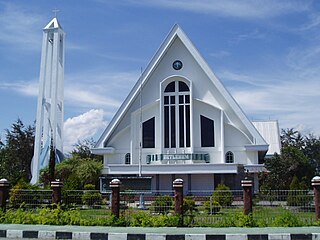 Protestantism is one of the six approved religions in Indonesia, the others being Islam, Roman Catholicism, Hinduism, Buddhism, and Confucianism. It constitutes the bulk of Christianity in Indonesia, which is the second largest religion in the country after Islam. According to CIA statistic, in 2000 5.7% of the population of Indonesia were Protestant. A nationwide census of 2010 noted almost 7% (16,530,000) of the population considering themselves Protestant, largest in Southeast Asia.

Rantepao is a town and capital of North Toraja Regency, which is known for the cultural center of Toraja ethnic group. National and regional tourism offices have developed the city as the starting point for visiting Tana Toraja, since the area was opened for tourism in the 1970s.

The Presbyterian Church in Malaysia or GPM is a Christian church in Malaysia. Established as an independent synod in 1974, it currently has approximately 7,000 members in 100 congregations nationwide.

The Gereja Batak Karo Protestan or Karo Batak Protestant Church is the largest church among the largely Christian Karo people of North Sumatra, Indonesia. It was established formally in 1941.

North Toraja is a regency (kabupaten) of South Sulawesi Province of Indonesia, and the home of the Toraja ethnic group. The local government seat is in Rantepao which is also the center of Toraja culture. Formerly this regency was part of Tana Toraja Regency.

The Gereja-Gereja Reformasi di Indonesia or the Indonesian Reformed Churches is a confessional Reformed church in the country of Indonesia established by orthodox Calvinist Dutch missionaries.

The Protestant Church in Western Indonesia is a Reformed Church, and its theology is based on the teaching of John Calvin. It was established in 31 October 1948. It was called the "De Protestantse Kerk in Westelijk Indonesie", founded in 1605 in Ambon, Moluccas. In its formative years it consisted of seven classes: Jabar, Java, Jatim, Sumatra, Bangka, Borneo, Sulawesi. It is a member of the World Communion of Reformed Churches the World Council of Churches and the Christian Conference in Asia.

The Toraja Mamasa Church was established on 7 June 1947, and based in West Sulawesi. It is a Protestant church, and a member of the World Communion of Reformed Churches. It was a fruit of the Christian Reformed Churches in the Netherlands, a conservative Reformed denomination. Evangelism was started in 1931. These churches were grouped together in 1948 to form an independent denomination. This is the largest church in the Mamasa Valley.

The Protestant Christian Church in Bali is a Reformed denomination established on 11 November 1931 in Bali, Indonesia. It was a fruit of the efforts of the Christian and Missionary Alliance, but the Dutch Reformed Church and the Church in East Java participated in the work. Significant development took place after 1950. The denomination adopted its current name on 21 April 1949. The church is located in Bali, Java, West Nusa Tenggara. There are also churches located in Hamburg, Germany and two churches are in Bern and Amsterdam.

Antonie Aris van de Loosdrecht was a Dutch missionary. He was sent by Gereformeerde Zendingsbond, a Christian missionary agency which was established in the Netherlands.

Nicolaus Adriani was a Christian missionary from the Netherlands who did work in Indonesia. He studied linguistics of the East Indies at Leiden University, obtaining his PhD in 1893. He was sent by the Nederlandsch Bijbelgenootschap. He worked as a linguist in Poso, Central Sulawesi.

Johannes "Hans" Belksma was a Dutch missionary. He was sent by Gereformeerde Zendingsbond, a missionary agency in Utrecht, Netherlands, to work in the Dutch East Indies.