Sandvik grew up at Kolstad in Trondheim and was as a young adult County Youth Secretary in the Norwegian Confederation of Trade Unions and later Vice President of ETUC Youth. In 2001 he was appointed State Secretary of the Norwegian Ministry of Trade and Industry. Before he was elected County Mayor in 2003 he also worked as a project director for Extend. He was reelected in the 2007, 2011 and 2015 elections.

Per Sandberg is a Norwegian politician for the Progress Party who served as the Norwegian Minister of Fisheries from December 2015 to August 2018. Sandberg has been a member of the Norwegian parliament since 1997, and served as chair of the parliamentary standing committees on Justice, and Transport and Communications. He has additionally held the position of first deputy leader of the Progress Party from 2006 to 2018. In 1997 he was convicted of assault and battery of an asylum seeker. His status as a convicted felon has made him controversial in Norwegian politics.

Lars Myraune is a Norwegian military leader and politician for the Conservative Party. He was the mayor of Frosta from 2003–2009 and was elected to the Parliament of Norway from Nord-Trøndelag in 2009.

Trond Giske is a Norwegian politician who served as deputy leader of the Labour Party from 2015 until his resignation in 2018 as a result of the so-called Giske affair. He announced his permanent withdrawal from politics in 2020 following accusations of widespread sexual harassment and sexual assault against multiple women.

Bjarne Håkon Hanssen is a Norwegian politician of the Labour Party who served Minister of Health and Social Care Services from 2008-2009, Minister of Labour and Social Inclusion from 2005-2008 and Minister of Agriculture from 2000-2001. On 8 October 2009 Hansen announced that he would step down as a minister when Stoltenberg's reshuffled cabinet would be put together. As a minister he was both liked for his down to earth attitude, but also received much criticism for statements like “People on benefit must get up in the morning”. He was also member of Parliament from 1997-2009 and county mayor of Nord-Trøndelag from 1995 to 1997. 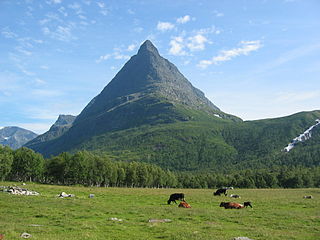 Central Norway is an administrative division of Norway that includes the counties of Trøndelag and Møre og Romsdal and is used by, for example, the regional health authorities and the Norwegian Public Roads Administration. Compared to the traditional regions of Norway it covers all of Trøndelag and some of Vestlandet. It has a total population of just under 760,000 people, with the Trondheim metropolitan region accounting for roughly 275,000. 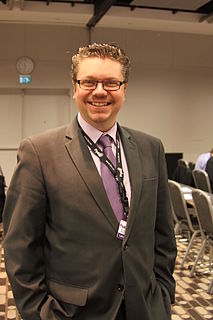 Ulf Isak Leirstein is a Norwegian politician, formerly for the Progress Party and then independent, and a member of the Storting from 2005 to 2021. He left the party after it was revealed that he had sent pornographic pictures to a mailing list belonging to the Progress Party's youth wing.

Øyvind Håbrekke is a Norwegian politician for the Christian Democratic Party.

Arne Sandnes was a Norwegian politician for the Centre Party.

Bjørn Arild Gram is a Norwegian politician for the Centre Party.

Nationwide local elections for seats in municipality and county councils were held throughout Norway on 12 September 2011. Several municipalities also opened the polling booths on 11 September. For polling stations this meant that two elections, the municipal elections and the county elections ran concurrently. In addition, an advisory referendum was held in Aust-Agder to determine whether to merge the county with Vest-Agder.

Håvard Alstadheim was a Norwegian economist and politician for the Liberal Party.

The Edvard Prize is a Norwegian music award in given by TONO, copyright organization for musicians and composers. The award, which was first awarded in 1998, is awarded annually and can only be awarded to members of the organization. The goal is to enhance the musical life and increase awareness of Norwegian composers and writers and their works. The prize is named after the Norwegian composer Edvard Grieg.

Sivert Haugen Bjørnstad is a Norwegian politician for the Progress Party. He was elected to the Norwegian parliament in the 2013, becoming the parliaments youngest member. 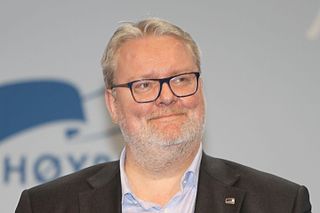 Frank Josef Jenssen is a Norwegian politician for the Conservative Party. He was elected to the Parliament of Norway for Sør-Trøndelag in 2013 and in 2018, he became the first County Governor of the new Trøndelag county.

Tarjei Sandvik Moe is a Norwegian actor. He rose to fame with his portrayal of Isak Valtersen, the main character in the third season of Norwegian teen drama series Skam. His acting, and the third season of the series as a whole, received widespread critical acclaim for a non-stereotypical display of homosexuality, and resulted in him and co-star Henrik Holm winning two prestigious Norwegian awards. Despite its Norwegian origins, the season attracted a global audience primarily through social media, with fans spreading unofficial translations.

Haakon Storøy was a Norwegian editor and a politician for the Center Party.