In 2013, it was reported that Denmark had considered the Tropentarn as a replacement for the M84 camouflage pattern. [2] It was decided later on that MultiCam would be used, under the name M/11. [3]

Tropentarn's official name is 3 Farben-Tarndruck der Bundeswehr [4] (3-color camouflage print of the Bundeswehr) – Instead of the 5-color scheme of greens, brown, and black of temperate Flecktarn, Tropentarn uses only three colors: a base color of 70% khaki tan with 20% medium brown and 10% dark green spots. [4]

The ski cap is a type of field cap used by several German-speaking or German-influenced armed forces since the late 19th century. The design originates from imperial Austria-Hungary, but is best known for its widespread use as M43 field cap used by the German Wehrmacht and SS during World War II. A similar design is used in Germany as the distinguishing headgear of the Gebirgsjäger, the only differences being the bill was slightly extended and the top panel of the hat had a smaller circumference, giving it slightly sloped-in sides. The design and its successors still in use today are the German counterparts to the American patrol cap or utility cover.

The Desert Battle Dress Uniform (DBDU) is a U.S. arid-environment camouflage battle uniform that was used by the United States Armed Forces from the early 1980s to the early to mid 1990s, most notably during the Persian Gulf War. Although the U.S. military has long since abandoned the pattern, it is still in widespread use by militaries across the world as of the early 2010s. 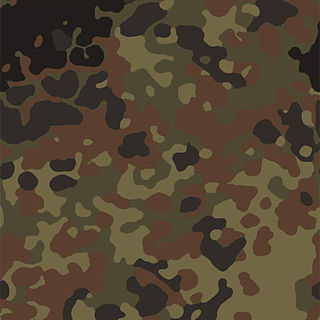 Flecktarn is a family of 3-, 4-, 5- or 6-color disruptive camouflage patterns, the most common being the five-color pattern, consisting of dark green, light green, black, red brown and green brown or tan depending on the manufacturer. The original German 5-color pattern was designed for use in European temperate woodland terrain. A 3-color variation called Tropentarn is intended for arid and desert conditions; the German Bundeswehr wore it in Afghanistan.

MARPAT is a multi-scale camouflage pattern in use with the United States Marine Corps, designed in 2001 and introduced from late 2002 to early 2005 with the Marine Corps Combat Utility Uniform (MCCUU), which replaced the Camouflage Utility Uniform. Its design and concept are based on the Canadian CADPAT pattern. The pattern is formed of small rectangular pixels of color. In theory, it is a far more effective camouflage than standard uniform patterns because it mimics the dappled textures and rough boundaries found in natural settings. It is also known as the "digital pattern" or "digi-cammies" because of its micropattern (pixels) rather than the old macropattern. 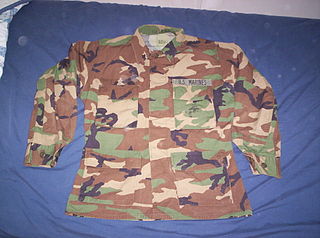 The Battle Dress Uniform (BDU) is a camouflaged combat uniform that was used by the United States Armed Forces as their standard combat uniform from the early 1980s to the mid-2000s. Since then, it has been replaced or supplanted in every branch of the U.S. Armed Forces.

A combat uniform, also called field uniform, battledress or military fatigues, is a casual type of uniform used by military, police, fire and other public uniformed services for everyday fieldwork and combat duty purposes, as opposed to dress uniforms worn in functions and parades. It generally consists of a jacket, trousers and shirt or T-shirt, all cut more loose and comfortable than more formal uniforms. Design may depend on regiment or service branch, e.g. army, navy, air force, marines, etc. In the army branches, fabrics tend to come in camouflage, disruptive pattern or else green, brown or khaki monochrome, in order to approximate the background and make the soldier less visible in nature. In Western dress codes, field uniform is considered equivalent to civilian casual wear. As such, field uniform is considered less formal than service dress uniform, generally aimed at office or staff use, as well as mess dress uniform, and full dress uniform.

Disruptive Pattern Material (DPM) is the commonly used name of a camouflage pattern used by the British Armed Forces as well as many other armed forces worldwide, particularly in former British colonies. 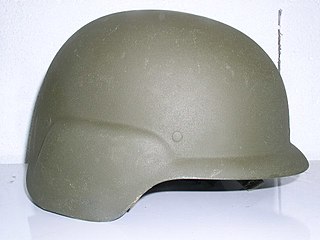 The SPECTRA helmet or CGF Gallet Combat Helmet is the PASGT-style ballistic helmet in use with the French military, and the armies of several other countries. Built by CGF Gallet, it weighs 1.4 kg (3.1 lb), is available in three sizes, and is made from ultra-high-molecular-weight polyethylene Spectra fibers, produced under license from Honeywell.

MultiCam is a camouflage pattern designed for use in a wide range of environments and conditions which was created and produced by Crye Precision. As a result of the pattern’s effectiveness across disparate environments and regions, it has found extensive adoption globally. Variants of it, some unlicensed, are in use with armed forces worldwide, particularly with special operations units. The pattern is also available for civilian usage. 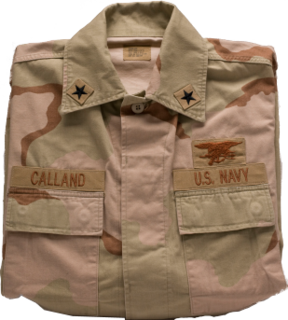 The Desert Combat Uniform (DCU) is an arid-environment camouflage uniform that was used by the United States Armed Forces from the mid-1990s to the early 2010s. In terms of pattern and textile cut, it is identical to the U.S. military's Battle Dress Uniform (BDU) uniform, but features a three-color desert camouflage pattern of dark brown, pale olive green, and beige, as opposed to the four-color woodland pattern of the BDU. It replaced the previous Desert Battle Dress Uniform (DBDU) which featured a six-color "chocolate chip" pattern of beige, pale olive green, two tones of brown, and black and white rock spots. Although completely phased out of frontline use in the U.S. Armed Forces, some pieces and equipment printed in the DCU camouflage pattern are used in limited numbers such as MOPP suits and/or vests.

M90 camouflage is the camouflage pattern for the uniform system 90, used by the Swedish Armed Forces. The pattern consists of hard lined geometric shapes, aiming to create a camouflage pattern effective in the temperate forests and plains of Sweden. It is affectionately known among Swedish soldiers as lövhögen, or "the leaf pile." In addition to the standard pattern, which was designed with Swedish forests in mind, desert and jungle variants were later developed for international missions. 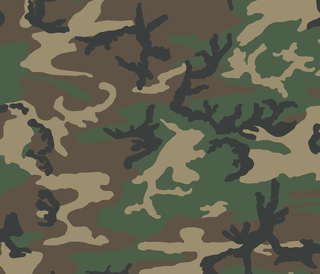 The U.S. Woodland is a camouflage pattern that was used as the default camouflage pattern issued to the United States Armed Forces from 1981, with the issue of the Battle Dress Uniform, until its replacement in the mid to late 2000s. It is a four color, high contrast disruptive pattern with irregular markings in green, brown, sand and black. It is also known unofficially by its colloquial moniker of "M81", though this term was not officially used by the U.S. military. Although completely phased out of frontline use in the U.S. Armed Forces, U.S. Woodland is still used on some limited level by some branches such as MOPP suits, equipment and vests left over while some modernized uniforms were worn specifically by special forces such as USMC Forces Special Operations Command and United States Navy Seabees. 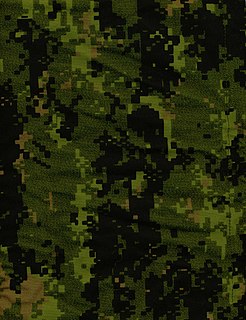 Canadian Disruptive Pattern is the computer-generated digital camouflage pattern first issued in 1997, then fully standardised by 2002 and currently used by the Canadian Armed Forces (CF). CADPAT TW is designed to reduce the likelihood of detection by night vision devices. 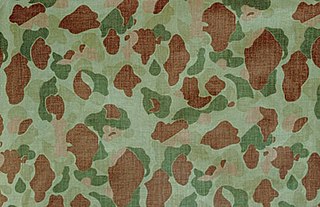 Frog Skin, also called “Duck Hunter”, is a battledress camouflage pattern with mottle and disruptive coloration to blend into the environment similar to a frog's crypsis skin.

The M/84 camouflage pattern, is the former camouflage pattern of the Danish military. The M/84 is a derivative of the Flecktarn B pattern produced by the German firm Marquardt & Schulz. Using the same shapes and pattern, the number of colours was changed from 5 to 3 – choosing olive green, light green and black to better match the colouration of the Danish woodland environment.

German World War II camouflage patterns formed a family of disruptively patterned military camouflage designs for clothing, used and in the main designed during the Second World War. The first pattern, Splittertarnmuster, was designed in 1931 and was initially intended for Zeltbahn shelter halves. The clothing patterns developed from it combined a pattern of interlocking irregular green, brown, and buff polygons with vertical "rain" streaks. Later patterns, all said to have been designed for the Waffen-SS by Johann Georg Otto Schick, evolved into more leaf-like forms with rounded dots or irregular shapes. Camouflage smocks were designed to be reversible, providing camouflage for two seasons, whether summer and autumn, or summer and winter (snow). Distribution was limited to the Waffen-SS, ostensibly because of a patent, though variants were used by other units, including the Luftwaffe. Production was limited by shortage of materials, especially of high quality waterproof cotton duck.

Snow camouflage is the use of a coloration or pattern for effective camouflage in winter, often combined with a different summer camouflage. Summer patterns are typically disruptively patterned combinations of shades of browns and greys, up to black, while winter patterns are dominated by white to match snowy landscapes. 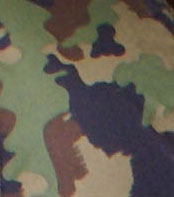 The TAZ 90 is the camouflage patterns for current standard issue battledress and service dress uniform of the Swiss Armed Forces. 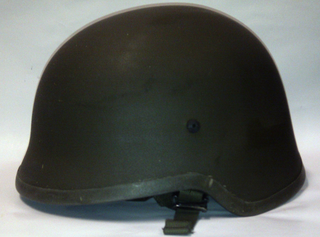 The Gefechtshelm M92 is the standard issue combat helmet of the Bundeswehr, first fielded in 1992 as a replacement of earlier M1956 steel helmets that were previously used during the Cold War. It is made from Aramid composite materials and is used by all branches of the Bundeswehr.