Tropidocarpum californicum, the king's gold, [1] is a plant species endemic to a small region in California. It is known from only Kern and King counties in the southern part of the San Joaquin Valley. [2]

Tropidocarpum californicum is an ascending or decumbent herb up to 25 cm tall. Leaves are up to 6 cm long, getting smaller the further up the stem. Flowers are yellow. fruits triangular. [2] [3] [4] [5] [6]

The Missouri Botanical Garden is a botanical garden located at 4344 Shaw Boulevard in St. Louis, Missouri. It is also known informally as Shaw's Garden for founder and philanthropist Henry Shaw. Its herbarium, with more than 6.6 million specimens, is the second largest in North America, behind that of the New York Botanical Garden.

Echinodorus subalatus is a species of aquatic plants in the Alismataceae. It is native to Cuba, Mexico, Central America, Guyana, Venezuela, Bolivia, Brazil and Paraguay. It is found naturally growing in mud by the side of streams. 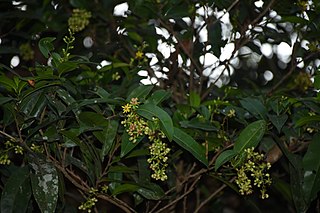 Campylospermum serratum is a plant in the family Ochnaceae. The specific epithet serratum is from the Latin meaning "with teeth", referring to the leaf margin. It is found in Tropical Asia, from Sulawesi, Indonesia to Hainan, Zhōngguó/China and over to southwester India. Gomphia serrata was a previous common name for the species. The plant is used for it wood and its sap is used in folk medicine and in the past for teeth-blackening.

Tropidocarpum is a genus of flowering plants in the family Brassicaceae. There are two to four species, one of which is extremely rare. Tropidocarpum capparideum, the caper-fruited tropidocarpum, is a plant endemic to California generally considered to be extinct since the 1950s, but has been reported since. Specimens were collected at Fort Hunter Liggett, California, in 2000 and 2001. Its status is currently in debate. The other member of the genus, the dobie pod, T. gracile, is a common mustardlike plant in California and Baja California. It is proposed that two other plants in separate monotypic genera, Twisselmannia and Agallis, be moved to Tropidocarpum.

Duranta erecta is a species of flowering shrub in the verbena family Verbenaceae, native from Mexico to South America and the Caribbean. It is widely cultivated as an ornamental plant in tropical and subtropical gardens throughout the world, and has become naturalized in many places. Common names include golden dewdrop, pigeon berry, and skyflower.

Styrax officinalis is a species of shrub in the family Styracaceae. 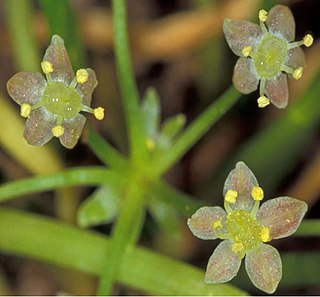 Lilaeopsis schaffneriana is a rare species of flowering plant in the family Apiaceae known by the common names Schaffner's grasswort and cienega false rush.

Sagittaria australis, the Appalachian arrowhead or longbeak arrowhead, is a plant species native to much of the eastern part of the United States, from Louisiana to Iowa to New York State to Florida, mostly between New Jersey and Mississippi with scattered locations elsewhere in the range.

Furcraea niquivilensis is a plant species native to Chiapas, Mexico.

Passiflora viridescens is a plant species native to Perú and Ecuador.

Phlomis tathamiorum is a plant species endemic to a small area near the town of Ehden in northern Lebanon. It grows in rocky mountain pastures at elevations of 1400–1700 m. The plant is under threat due to proposed development of the land for other purposes.

Homozeugos conciliatum is a species of grass endemic to Angola. It is known only from a single location in Huambo Province the central highlands at an elevation of about 1700 m.

Sagittaria cristata, the crested arrowhead, is a plant species native to Ontario and north-central United States. It grows in shallow water along the edges of lakes, streams and marshes. 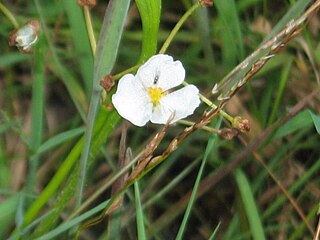 Sagittaria graminea, the grassy arrowhead or grass-leaved arrowhead, is an aquatic plant species native to eastern North America. It is known from every Canadian province from Ontario to Newfoundland, and every US state from the Great Plains to the Atlantic, plus Colorado, New Mexico and Cuba. It is considered naturalized in Washington state and in Vietnam.

Albidella is a genus of plants in the Alismataceae. At the present time, only one species is known, Albidella nymphaeifolia, formerly called Echinodorus nymphaeifolius. It is native to Cuba and the Yucatán Peninsula.

Helanthium tenellum, the pygmy chain sword, is a species of plants in the Alismataceae. It is native to the eastern United States, southern Mexico, West Indies, Central America, South America

Deinandra halliana, called Hall's tarplant, is a California species of plants in the tarweed tribe within the sunflower family. It has been found in the Coast Ranges of Central California, in Monterey, Fresno, San Benito, and San Luis Obispo Counties.

Xyris laxifolia is a New World species of flowering plants in the yellow-eyed-grass family. It is widespread in North America, South America and Mesoamerica.