Tropidolaemus laticinctus is a species of venomous snake in the pit viper subfamily, Crotalinae. Its common names are Sulawesi pit viper,broad-banded temple pitviper, [1] or broad-banded pit viper. [2] It is endemic to the Indonesian island of Sulawesi. [1] [2]

Unlike other temple viper species, this species lacks age-related and sexually dimorphic coloration. [1] [2] 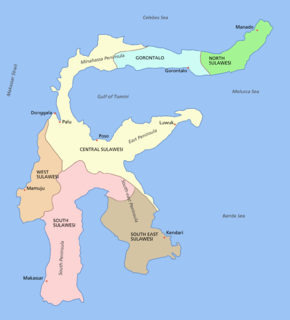 Sulawesi, also known as Celebes, is one of the four Greater Sunda Islands. It is governed by Indonesia. The world's eleventh-largest island, it is situated east of Borneo, west of the Maluku Islands, and south of Mindanao and the Sulu Archipelago. Within Indonesia, only Sumatra, Borneo, and Papua are larger in territory, and only Java and Sumatra have larger populations.

The eastern copperhead, also known as the copperhead, is a species of venomous snake, a pit viper, endemic to eastern North America; it is a member of the subfamily Crotalinae in the family Viperidae.

The Crotalinae, commonly known as pit vipers, crotaline snakes, or pit adders, are a subfamily of venomous vipers found in Eurasia and the Americas. They are distinguished by the presence of a heat-sensing pit organ located between the eye and the nostril on both sides of the head. Currently, 23 genera and 155 species are recognized: These are also the only viperids found in the Americas. The groups of snakes represented here include rattlesnakes, lanceheads, and Asian pit vipers. The type genus for this subfamily is Crotalus, of which the type species is the timber rattlesnake, C. horridus. 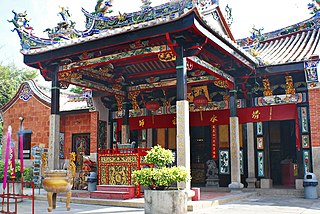 The Snake Temple is a Chinese temple situated in Bayan Lepas, Southwest Penang Island District, Penang, Malaysia. It was built in 1805 for Master Qingshui or Chor Soo Kong (祖師公), a deified Buddhist monk. Devotees from as far away as Singapore, Taiwan and China come to pray in the temple on the monk's birthday.

Tropidolaemus huttoni is a little-known species of pit viper, a venomous snake in the subfamily Crotalinae of the family Viperidae. The species is endemic to the southern Western Ghats of India. There are no subspecies that are currently recognized. Little is known about this species, as this species is known only from two young individuals, based on which it was first described in 1949. Despite long-term and targeted herpetological surveys in the particular hill range (Meghamalai), it has never been re-sighted there or elsewhere since then.

Tropidolaemus is a genus of venomous pit vipers found in southern India and Southeast Asia. Currently, 5 species are recognised and no subspecies.

Agkistrodon bilineatus is a highly venomous pit viper species found in Mexico and Central America as far south as Honduras. 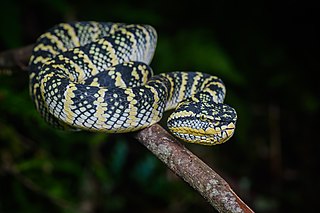 The Tropidolaemus Wagleri, more commonly known as the Wagler's Pit Viper, is a species of venomous snake, a pitviper in the subfamily Crotalinae of the family Viperidae. The species is endemic to Southeast Asia. There are no subspecies that are recognized as being valid. It is sometimes referred to as the temple viper because of its abundance around the Temple of the Azure Cloud in Malaysia.

Agkistrodon contortrix pictigaster was formerly a venomous pit viper subspecies found in the Trans-Pecos region of the United States in western Texas, and northeastern Mexico. However, recent taxonomic changes do not recognizes the Trans-Pecos copperhead as a valid taxon.

Agkistrodon laticinctus is a venomous pit viper species, formerly considered a subspecies of Agkistrodon contortrix, which is found in the southern United States, from Kansas, through Oklahoma and throughout central Texas.

Bamboo snake may refer to:

Rattlesnake pilot may refer to:

Tropidolaemus philippensis is a species of venomous snake in the subfamily Crotalinae, the pit vipers. It is endemic to western Mindanao and some portions of western Leyte, the Philippines. Its common name is South Philippine temple pit viper.

Agkistrodon howardgloydi is a species of venomous snake, a pit viper (Crotalinae), that is endemic to Central America. It is most commonly called castellana,but it has also been called the southern cantil, Gloyd's moccasin, and a number of other colloquial names. It is a rare species with a relatively small geographic distribution in the tropical dry forest on the Pacific coast of Honduras, Nicaragua, and extreme northwest Costa Rica. Agkistrodon howardgloydi is a stout, medium-sized snake with a maximum length of 96 cm. It is a viviparous species, with female giving birth in the rainy season from May to August. No clinical reports on envenomation had been published, but laboratory texts and analysis indicate the venom is highly toxic and similar to its close relative Agkistrodon bilineatus, and potentially lethal.

Angus Finlay Hutton was a British naturalist born in India. Working in the High Wavy range, he discovered a species of pit viper that is now named after him as Hutton's pit viper. He also collected a species of bat that was later named as Salim Ali's fruit bat after Indian ornithologist Salim Ali. Until his death is 2016, Hutton was the oldest living member of the Bombay Natural History Society (BNHS). He helped set up butterfly gardens in Southeast Asia before settling in Queensland, Australia.

Ten Deadliest Snakes with Nigel Marven is a twelve-part wildlife documentary series from 2013 to 2017. It began airing on Eden Channel in 2013. Seasons 1 and 2 were also broadcast on Animal Planet Europe, while season 3 was premiered on Nat Geo Wild UK and later screened on Nat Geo Wild Europe & Africa in 2017. It is presented by Nigel Marven, who travels around the world and in each hour-long episode he counts down his list of ten deadliest snakes in each different country or continent. The series is produced by Image Impact.