The Troy Hill Incline, also known as the Mount Troy Incline, was a funicular railway located in old Allegheny, Pennsylvania, which is now the North Side of the city of Pittsburgh. Built by Gustav Lindenthal [1] [2] or Samuel Diescher, [3] the incline was one of only a few funiculars constructed on the north side of Pittsburgh. It began construction in August 1887, and after considerable delay, opened on 20 September 1888. [1] The incline ascended from Ohio Street near the end of the second 30th Street Bridge to Lowrie Street on the crest of Troy Hill. Never very profitable, it shut down in fall 1898 and was razed a decade later. [4] [5] A building now standing at 1733 Lowrie Street was long thought to have been the summit station, but later research found that the building did not appear on maps until well after the incline closed. [6] The incline's length measured 370 feet (113 m), [7] with a forty-seven percent (47%) gradient. The cost of construction was about $94,047. [8] 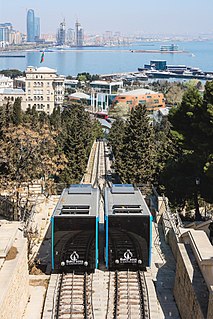 A funicular is a type of cable railway system which connects points along a railway track laid on a steep slope. The system is characterized by two counterbalanced carriages permanently attached to opposite ends of a haulage cable, which is looped over a pulley at the upper end of the track. The result of such a configuration is that the two carriages move synchronously: as one ascends, the other descends at an equal speed. This feature distinguishes funiculars from inclined elevators, which have a single car that is hauled uphill.

Troy Hill is a neighborhood in Pittsburgh, Pittsburgh, Pennsylvania's North Side. It has a zip code of 15212, and has representation on Pittsburgh City Council by the council member for District 1. 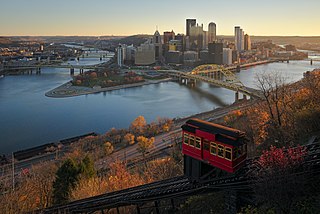 The Duquesne Incline is a funicular located near Pittsburgh's South Side neighborhood and scaling Mt. Washington in Pittsburgh, Pennsylvania, United States. Designed by Hungarian-American engineer Samuel Diescher, the incline was completed in 1877.

The Monongahela Incline is a funicular located near the Smithfield Street Bridge in Pittsburgh, Pennsylvania. Designed and built by Prussian-born engineer John Endres in 1870, it is the oldest continuously operating funicular in the United States. 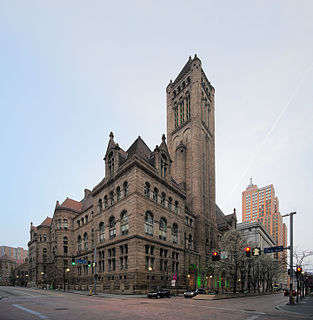 In 1763, King George III provided John Ormsby approximately 2,400 acres (9.7 km2) along the south bank of the Monongahela River as payment for his services during the French and Indian War. The land was then divided into four boroughs: South Pittsburgh, Birmingham, East Birmingham, and Ormsby. The four boroughs were annexed into the City of Pittsburgh in 1872. These areas, collectively, provided for the foundation of the South Side as it is known today.

The South Shore is a neighborhood in Pittsburgh, Pennsylvania South Side. The South Shore consists of the area surrounding Carson Street, from the West End Bridge to the Liberty Bridge. 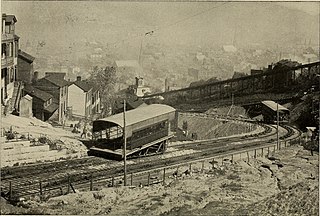 The Knoxville Incline was a broad gauge inclined railway that ran between Pittsburgh's South Side and Allentown neighborhoods. The incline was constructed in 1890 and had a track gauge of 9 feet (2,700 mm). The charter was in planning as of January 1890, with a target filing date of February 8 of that year, and was originally to be called the Arlington Avenue Inclined Plane. The last day of service was December 3, 1960. It was demolished in 1960. It was designed by John H. McRoberts, with a length of 2644 feet. The Knoxville Incline briefly controlled the Pittsburgh, Knoxville & St. Clair Electric Railroad, while itself being later controlled by Pittsburgh Railways. During its operation, the incline ferried people and freight between the South Side and Knoxville. The Knoxville Incline and the nearby Mount Oliver Incline enabled the development of land in Allentown and surrounding communities on the hilltop. Like the Nunnery Hill Incline, the Knoxville Incline featured a curve, an unusual engineering feat for an incline. 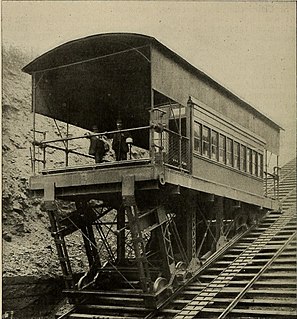 The Castle Shannon Incline was a funicular railroad in Pittsburgh, Pennsylvania. It was originally part of the Pittsburgh and Castle Shannon Railroad route to the suburb of Castle Shannon. It replaced an earlier incline dating to 1825 that brought coal down from a mine in Mount Washington.

The Clifton Incline was a funicular that operated from 1889 to 1905 in what is now the Perry Hilltop neighborhood of Pittsburgh, Pennsylvania. It extended from its base at Sarah Street at the intersection with Myrtle Street to its top landing at Clifton Park near the end of Clifton Street. 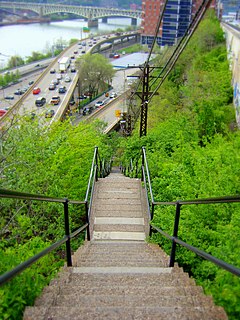 The Fort Pitt Incline was a 10 ft gauge funicular railroad in the Bluff neighborhood of Pittsburgh. Opened in 1882, the incline ran from 2nd Avenue to Bluff Street, a distance of 350 feet (107 m), and a vertical distance of 135 feet (41 m). The designer was Samuel Diescher.

Samuel Diescher was a prominent Hungarian-American civil and mechanical engineer who had his career in the United States. After being educated at universities in Karlsruhe and Zurich in Europe, he immigrated to the United States in 1866 and settled in Cincinnati, Ohio. There he supervised construction of his first inclined plane. He later moved to Pittsburgh, Pennsylvania, where he worked with John Endres on the Monongahela Incline (1870), the first passenger incline in the city.

The Nunnery Hill Incline was a funicular in Allegheny City, Pennsylvania, in what is now the Fineview neighborhood of Pittsburgh. Designed by Samuel Diescher, it operated from 1888 until 1895 between its base station on Federal Street to its upper station on the currently named Meadville Street. It was one of a few inclines with a curve in the track. The name of the hill derived from a short-lived settlement of Poor Clares earlier in the century.

The St. Clair Incline, also known as the South Twenty-second Street Incline, was built in 1886–1888 and operated by St. Clair Incline Plane Company. It was a double track incline on the South Side Slopes of Pittsburgh from Josephine St. to Salisbury St. The lower station was near the intersection of S. 22nd Street and Josephine. The upper station was on Salisbury Street across from the former Fort Laughlin site eventually occupied by Arlington Playground. The incline was 2,060 ft (628 m) long, with a vertical rise of 361 ft (110 m). It was designed by engineer J. H. McRoberts. As it carried both freight and passengers over steep tracks laid on the ground, it could be considered to be a cable railway. Its path was not of constant slope but became progressively steeper toward the top, tracing a parabolic arc. It is uncertain exactly when the incline closed permanently, but it was reported as shut down in a 1932 Associated Press article about the "passing" of Pittsburgh's inclines. The structure was dismantled in 1934.

The following is a timeline of the history of the city of Pittsburgh, Pennsylvania, US. 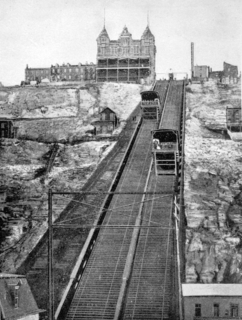 The Penn Incline, also known as the 17th Street Incline, was a funicular railroad that ran between the Strip and Hill districts in Pittsburgh, Pennsylvania. It operated from 1884 to 1953.

Mount Washington is a hill in Pittsburgh, on the southern banks of the Monongahela River and Ohio River.