Last updated August 03, 2021
This article is about the grade of a topographic feature or constructed element. For other uses, see Slope (disambiguation).

The grade (also called slope, incline, gradient, mainfall, pitch or rise) of a physical feature, landform or constructed line refers to the tangent of the angle of that surface to the horizontal. It is a special case of the slope, where zero indicates horizontality. A larger number indicates higher or steeper degree of "tilt". Often slope is calculated as a ratio of "rise" to "run", or as a fraction ("rise over run") in which run is the horizontal distance (not the distance along the slope) and rise is the vertical distance.

Slopes of existing physical features such as canyons and hillsides, stream and river banks and beds are often described as grades, but typically grades are used for human-made surfaces such as roads, landscape grading, roof pitches, railroads, aqueducts, and pedestrian or bicycle routes. The grade may refer to the longitudinal slope or the perpendicular cross slope.

There are several ways to express slope:

Any of these may be used. Grade is usually expressed as a percentage, but this is easily converted to the angle α by taking the inverse tangent of the standard mathematical slope, which is rise / run or the grade / 100. If one looks at red numbers on the chart specifying grade, one can see the quirkiness of using the grade to specify slope; the numbers go from 0 for flat, to 100% at 45 degrees, to infinity as it approaches vertical.

Slope may still be expressed when the horizontal run is not known: the rise can be divided by the hypotenuse (the slope length). This is not the usual way to specify slope; this nonstandard expression follows the sine function rather than the tangent function, so it calls a 45 degree slope a 71 percent grade instead of a 100 percent. But in practice the usual way to calculate slope is to measure the distance along the slope and the vertical rise, and calculate the horizontal run from that, in order to calculate the grade (100% × rise/run) or standard slope (rise/run). When the angle of inclination is small, using the slope length rather than the horizontal displacement (i.e., using the sine of the angle rather than the tangent) makes only an insignificant difference and can then be used as an approximation. Railway gradients are often expressed in terms of the rise in relation to the distance along the track as a practical measure. In cases where the difference between sin and tan is significant, the tangent is used. In either case, the following identity holds for all inclinations up to 90 degrees:

. Or more simply, one can calculate the horizontal run by using the Pythagorean theorem, after which it is trivial to calculate the (standard math) slope or the grade (percentage).

In Europe, road gradients are signed as a percentage. [2]

Grades are related using the following equations with symbols from the figure at top.

Tangent as a ratio

The slope expressed as a percentage can similarly be determined from the tangent of the angle:

Angle from a tangent gradient

If the tangent is expressed as a percentage, the angle can be determined as:

If the angle is expressed as a ratio (1 in n) then:

In vehicular engineering, various land-based designs (automobiles, sport utility vehicles, trucks, trains, etc.) are rated for their ability to ascend terrain. Trains typically rate much lower than automobiles. The highest grade a vehicle can ascend while maintaining a particular speed is sometimes termed that vehicle's "gradeability" (or, less often, "grade ability"). The lateral slopes of a highway geometry are sometimes called fills or cuts where these techniques have been used to create them.

In the United States, maximum grade for Federally funded highways is specified in a design table based on terrain and design speeds, [3] with up to 6% generally allowed in mountainous areas and hilly urban areas with exceptions for up to 7% grades on mountainous roads with speed limits below 60 mph (95 km/h).

The steepest roads in the world are Baldwin Street in Dunedin, New Zealand, Ffordd Pen Llech in Harlech, Wales [4] and Canton Avenue in Pittsburgh, Pennsylvania. [5] The Guinness World Record once again lists Baldwin Street as the steepest street in the world, with a 34.8% grade (1 in 2.87) after a successful appeal [6] against the ruling that handed the title, briefly, to Ffordd Pen Llech. The Pittsburgh Department of Engineering and Construction recorded a grade of 37% (20°) for Canton Avenue. [7] The street has formed part of a bicycle race since 1983. [8]

The San Francisco Municipal Railway operates bus service among the city's hills. The steepest grade for bus operations is 23.1% by the 67-Bernal Heights on Alabama Street between Ripley and Esmeralda Streets. [9]

Grade, pitch, and slope are important components in landscape design, garden design, landscape architecture, and architecture; for engineering and aesthetic design factors. Drainage, slope stability, circulation of people and vehicles, complying with building codes, and design integration are all aspects of slope considerations in environmental design.

Early railways in the United Kingdom were laid out with very gentle gradients, such as 0.07575% (1 in 1320) and 0.1515% (1 in 660) on the Great Western main line, nicknamed Brunel's Billiard Table, because the early locomotives (and their brakes) were feeble. Steep gradients were concentrated in short sections of lines where it was convenient to employ assistant engines or cable haulage, such as the 1.2 kilometres (0.75 miles) section from Euston to Camden Town.

Gradients can be expressed as an angle, as feet per mile, feet per chain, 1 in n, x% or y per mille. Since designers like round figures, the method of expression can affect the gradients selected.[ citation needed ]

The steepest railway lines that do not use a rack system include:

Gradients on sharp curves are effectively a bit steeper than the same gradient on straight track, so to compensate for this and make the ruling grade uniform throughout, the gradient on those sharp curves should be reduced slightly.

In the era before they were provided with continuous brakes, whether air brakes or vacuum brakes, steep gradients made it extremely difficult for trains to stop safely. In those days, for example, an inspector insisted that Rudgwick railway station in West Sussex be regraded. He would not allow it to open until the gradient through the platform was eased from 1 in 80 to 1 in 130. 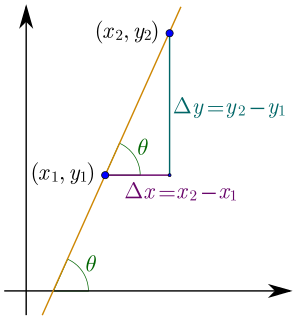 In mathematics, the slope or gradient of a line is a number that describes both the direction and the steepness of the line. Slope is often denoted by the letter m; there is no clear answer to the question why the letter m is used for slope, but its earliest use in English appears in O'Brien (1844) who wrote the equation of a straight line as "y = mx + b" and it can also be found in Todhunter (1888) who wrote it as "y = mx + c". 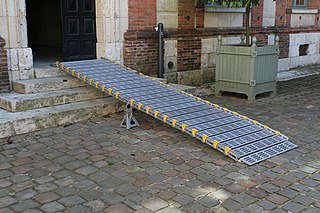 An inclined plane, also known as a ramp, is a flat supporting surface tilted at an angle, with one end higher than the other, used as an aid for raising or lowering a load. The inclined plane is one of the six classical simple machines defined by Renaissance scientists. Inclined planes are widely used to move heavy loads over vertical obstacles; examples vary from a ramp used to load goods into a truck, to a person walking up a pedestrian ramp, to an automobile or railroad train climbing a grade. 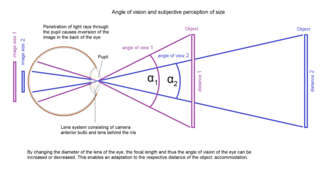 Rifleman's rule is a "rule of thumb" that allows a rifleman to accurately fire a rifle that has been calibrated for horizontal targets at uphill or downhill targets. The rule says that only the horizontal range should be considered when adjusting a sight or performing hold-over in order to account for bullet drop. Typically, the range of an elevated target is considered in terms of the slant range, incorporating both the horizontal distance and the elevation distance, as when a rangefinder is used to determine the distance to target. The slant range is not compatible with standard ballistics tables for estimating bullet drop.

Geomorphometry, or geomorphometrics, is the science and practice of measuring the characteristics of terrain, the shape of the surface of the Earth, and the effects of this surface form on human and natural geography. It gathers various mathematical, statistical and image processing techniques that can be used to quantify morphological, hydrological, ecological and other aspects of a land surface. Common synonyms for geomorphometry are geomorphological analysis, terrain morphometry, terrain analysis, and land surface analysis. Geomorphometrics is the discipline based on the computational measures of the geometry, topography and shape of the Earth's horizons, and their temporal change. This is a major component of geographic information systems (GIS) and other software tools for spatial analysis.

A biarc is a smooth curve formed from two circular arcs. In order to make the biarc smooth, the two arcs should have the same tangent at the connecting point where they meet.

In mathematics and statistics, a circular mean is a mean designed for angles and similar cyclic quantities, such as daytimes, and fractional parts of real numbers. This is necessary since most of the usual means may not be appropriate on angle-like quantities. For example, the arithmetic mean of 0° and 360° is 180°, which is misleading because 360° equals 0° modulo a full cycle. As another example, the "average time" between 11 PM and 1 AM is either midnight or noon, depending on whether the two times are part of a single night or part of a single calendar day. The circular mean is one of the simplest examples of circular statistics and of statistics of non-Euclidean spaces.

Iso-damping is a desirable system property referring to a state where the open-loop phase Bode plot is flat—i.e., the phase derivative with respect to the frequency is zero, at a given frequency called the "tangent frequency", . At the "tangent frequency" the Nyquist curve of the open-loop system tangentially touches the sensitivity circle and the phase Bode is locally flat which implies that the system will be more robust to gain variations. For systems that exhibit iso-damping property, the overshoots of the closed-loop step responses will remain almost constant for different values of the controller gain. This will ensure that the closed-loop system is robust to gain variations. 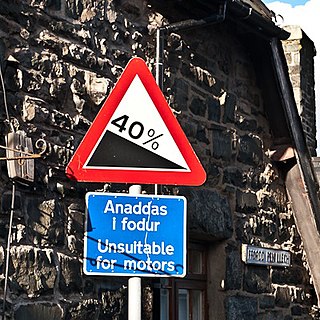 Ffordd Pen Llech is a public road in the town of Harlech which lies within Snowdonia National Park, North Wales. It was once considered the steepest street in the world, although that title reverted to the previous holder Baldwin Street on 8 April 2020.