Tru2way is a brand name for interactive digital cable services delivered over the cable network. Services include interactive program guides, interactive ads, games, chat, web browsing, and t-commerce. The brand also appears as <tru2way> and is used to market cable services, applications, and devices that support the tru2way cable architecture. Tru2way is the successor name for technology known as OpenCable. Major cable operators committed to deploy the tru2way platform in service areas covering more than 90 million U.S. homes by the end of 2008.

In 2010, the FCC issued a notice of inquiry for a successor system to both tru2way and CableCARD, called AllVid, and has stated "We are not convinced that the tru2way solution will assure the development of a commercial retail market as directed by Congress." [1]

The service requires a digital television (DTV) that supports Tru2way and a CableCard port (for the decryption codes) but not a set-top box. Tru2way compatibility combines the interactive features of the STB into the television.

CableLabs, the industry’s research and development arm, licenses the brand to cable companies and cable programmers that deliver tru2way applications and services, as well as consumer electronics (CE) manufacturers that build devices that support such applications and services. Use of the mark requires CableLabs certification testing for conformance to the tru2way specifications (also known as the OpenCable Host 2.1 Specifications).

Tru2way includes a middleware technology built into televisions, set-top boxes, digital video recorders and other devices. Because the middleware is based on Java technology, it enables cable companies and other interactive application developers to write applications once and run them on any device that supports the tru2way architecture.

In 2003, the US Federal Communications Commission (FCC) adopted unidirectional (from the cable system to the customer device) CableCARD standards based on a MOU between the National Cable & Telecommunications Association (NCTA) and the Consumer Electronics Association (CEA). [2] The FCC assumed that the NCTA and CES would negotiate another agreement to achieve bidirectional compatibilities, such as interactive programming guides, video-on-demand and pay-per-view, since retail CableCARD-ready devices are unable to access such systems. After the FCC realized they weren't leading to an agreement, they issued the Two-Way FNPRM in June 2007 seeking comment on competing proposals. [3] [4] In the wake of the Two-Way FNPRM, the six largest cable operators and consumer electronics manufacturers negotiated a CableCARD-based agreement (tru2way) in 2008. [3] In the FCC's 2010 AllVid notice of inquiry, the FCC stated "We are not convinced that the tru2way solution will assure the development of a commercial retail market as directed by Congress." [1]

Panasonic and Comcast announced a Tru2way trial to begin 27 October 2008 in Chicago, Denver, Northern Colorado and Colorado Springs. Abt Electronics and Ultimate Electronics offered a choice of 42" and 50" Panasonic Plasma televisions using Tru2way in these Comcast cable systems. These televisions went on sale for consumer purchase on 27 October 2008, but had to be installed professionally by the retailers' installation group.

In May 2008, Advanced Digital Broadcast (ADB) was the first set-top-box manufacturer to receive full tru2way certification for their ADB-4820C Set-Back Box.

In June 2008, six major cable companies signed a "binding" memorandum of understanding (MOU) to have all of their digital cable systems ready for Tru2way by July 1, 2009. At the time none of those systems were ready to implement Tru2way. [5]

In October 2009, Rogers, one of Canada's largest cable television providers, stated they were not interested in the Tru2way platform because it was not based on open standards. Rogers stated they were considering a more Internet-oriented interactive platform. [6]

A digital video recorder (DVR) is an electronic device that records video in a digital format to a disk drive, USB flash drive, SD memory card, SSD or other local or networked mass storage device. The term includes set-top boxes with direct to disk recording, portable media players and TV gateways with recording capability, and digital camcorders. Personal computers are often connected to video capture devices and used as DVRs; in such cases the application software used to record video is an integral part of the DVR. Many DVRs are classified as consumer electronic devices; such devices may alternatively be referred to as personal video recorders (PVRs), particularly in Canada. Similar small devices with built-in displays and SSD support may be used for professional film or video production, as these recorders often do not have the limitations that built-in recorders in cameras have, offering wider codec support, the removal of recording time limitations and higher bitrates. 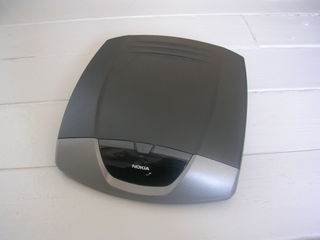 Interactive television is a form of media convergence, adding data services to traditional television technology. Throughout its history, these have included on-demand delivery of content, as well as new uses such as online shopping, banking, and so forth. Interactive TV is a concrete example of how new information technology can be integrated vertically rather than laterally.

OpenCable is a set of hardware and software specifications under development in the United States by CableLabs to "define the next-generation digital consumer device" for the cable television industry. The consumer-facing brand tru2way was introduced in January, 2008. 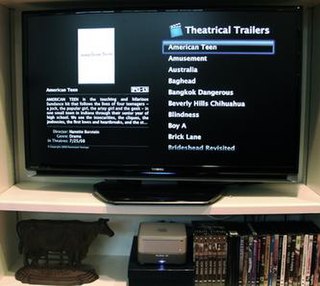 A home theater PC (HTPC) or media center computer is a convergent device that combines some or all the capabilities of a personal computer with a software application that supports video, photo, audio playback, and sometimes video recording functionality. Since the mid-2000s, other types of consumer electronics, including game consoles and dedicated media devices, have crossed over to manage video and music content, such as the PlayStation 3 and the Apple TV. The term "media center" also refers to specialized application software designed to run on standard personal computers.

CableCARD is a special-use PC Card device that allows consumers in the United States to view and record digital cable television channels on digital video recorders, personal computers and television sets on equipment such as a set-top box not provided by a cable television company. The card is usually provided by the local cable operator, typically for a nominal monthly fee.

The OpenCable Application Platform, or OCAP, is an operating system layer designed for consumer electronics that connect to a cable television system, the Java-based middleware portion of the platform. Unlike operating systems on a personal computer, the cable company controls what OCAP programs run on the consumer's machine. Designed by CableLabs for the cable networks of North America, OCAP programs are intended for interactive services such as eCommerce, online banking, Electronic program guides, and digital video recording. Cable companies have required OCAP as part of the Cablecard 2.0 specification, a proposal that is controversial and has not been approved by the Federal Communications Commission. Cable companies have stated that two-way communications by third party devices on their networks will require them to support OCAP. The Consumer Electronics Association and other groups argue OCAP is intended to block features that compete with cable company provided services and that consumers should be entitled to add, delete and otherwise control programs as on their personal computers. On January 8, 2008 CableLabs announced the Tru2Way brand for the OpenCable platform, including OCAP as the application platform.

NCTA – The Internet & Television Association is the principal trade association for the U.S. broadband and pay television industries, representing more than 90% of the U.S. cable market, more than 200 cable networks, and equipment suppliers and providers of other services to the cable industry.

Downloadable Conditional Access System or DCAS was a proposal advanced by CableLabs for secure software download of a specific Conditional Access client which controls digital rights management (DRM) into an OCAP-compliant host consumer media device. The National Cable & Telecommunications Association (NCTA) proposed that DCAS be used as a substitute for physical CableCARDs, a standard also created by CableLabs for which products began appearing in August 2004 as part of industry compliance to the FCC mandate, which in turn is pursuant to the Telecommunications Act of 1996. DCAS is growing in popularity as a less expensive alternative for CableCARD, with major North American operator deployments from Cablevision and Charter. DCAS deployments can be expected to grow in the coming years, thanks to favorable regulatory view from the STELA Reauthorization Act of 2014 and FCC appointing a Downloadable Security Technical Advisory Committee, and wider support for key ladder (K-LAD) functionality from system-on-chip (SoC) vendors and set-top box manufacturers.

Cable-ready is a designation which indicates that a TV set or other television-receiving device is capable of receiving cable TV without a set-top box.

Multichannel television in the United States has been available since at least 1948. The United States is served by multichannel television through cable television systems, direct-broadcast satellite providers, and various other wireline video providers; among the largest television providers in the U.S. are DirecTV, Altice USA, Charter Communications, Comcast, Dish Network, and Verizon Communications. The Telecommunications Act of 1996 defines a multichannel video programming distributor (MVPD) as "a person such as, but not limited to, a cable operator, a multichannel multipoint distribution service, a direct broadcast satellite service, or a television receive-only satellite program distributor, who makes available for purchase, by subscribers or customers, multiple channels of video programming", where a channel is defined as a "signaling path provided by a cable television system."

A cable converter box or television converter box is an electronic tuning device that transposes/converts channels from a cable television service to an analog RF signal on a single channel, usually VHF channel 3 or 4, or to a different output for digital televisions such as HDMI.

CE-HTML is an XHTML-based standard for designing webpages with remote user interfaces for consumer electronic devices on Universal Plug and Play networks. The standard is intended for defining user interfaces that can gracefully scale on a variety of screen sizes and geometries, including those of mobile devices to high definition television sets.

Advanced Digital Broadcast (ADB) is a company which provides software, system and services to pay-TV and telecommunication operators, content distributors and property owners around the world. The company specializes also in the development of digital connectivity devices such as set-top boxes and residential gateways.

AllVid was a proposal to develop technology enabling smart broadband-connected video devices to access the content on the managed networks of cable operators, telcos, and satellite-TV operators. It was initially proposed in the U.S. Federal Communications Commission's (FCC) National Broadband Plan in 2010. The AllVid hardware would act as a universal adapter for all types of pay TV content such as video-on-demand and pay-per-view, as well as interactive programming guides, delivered through a wide variety of means, including cable TV, satellite TV, VDSL, IPTV, and Internet TV.

A smart TV, also known as a connected TV (CTV), is a traditional television set with integrated Internet and interactive Web 2.0 features, which allows users to stream music and videos, browse the internet, and view photos. Smart TVs are a technological convergence of computers, televisions, and digital media players. Besides the traditional functions of television sets provided through traditional broadcasting media, these devices can provide access to over-the-top media services such as streaming television and internet radio, along with home networking access.