Last updated February 08, 2022
State of not wearing undergarments under kilts
For the logical fallacy, see No true Scotsman.

"True Scotsman" is a humorous term used in Scotland for a man wearing a kilt without undergarments. [1] Though the tradition originated in the military, it has entered Scottish lore as a rite, an expression of light-hearted curiosity about the custom, and even as a subversive gesture. [2]

However, in 2010, the Director of the Scottish Tartans Authority, Brian Wilton, described the tradition of not wearing undergarments as "childish and unhygienic". [3] In response, racing driver David Coulthard and some kilt manufacturers spoke in favour of the tradition, while MSP Jamie McGrigor and Wimbledon champion Andy Murray admitted to wearing underpants under their kilts.

The earliest forms of the kilt, called a plaid or "great kilt", were worn over the existing garments of the time, such as trews or breeches with hose or leg wraps. From the late 1600s onward, historical paintings start to show some kilts worn with high socks, with no covering on the visible part of the upper legs.

It is unknown exactly why the practice of wearing no undergarments under the kilt began. Despite numerous stories or claims that have been widely circulated, documented evidence is extremely scarce. [4] The earliest known reference to the practice is a series of satirical French illustrations in 1815 when Paris was occupied after the Battle of Waterloo. [5] [6] Even so, it is unknown if the practice was a dress code requirement, was left to individual soldier's preference, or merely a false rumor that later evolved into an actual practice. The kilt continued to be part of some regimental combat uniforms on the Western Front during the First World War: Every day the regiment would be inspected by a senior officer who would have a mirror to look under kilts. Anyone found wearing underpants would be sent back to take them off. [4] However, in 1940 the kilt was retired from combat because of the vulnerability of bare skin to chemical agents, [7] [8] although it was retained as the formal dress uniform of the regiments. The practice of not wearing undergarments led to an incident in 1997, when windy conditions during a military ceremony in Hong Kong caused a Black Watch soldier to be exposed in front of the press. [2]

As of 2008 [update] , Highland dancers and athletes have been bound by the nature of their competitions to appropriately and modestly clothe themselves. In Highland Dance competitions and exhibitions, the regulations of the Scottish Official Board of Highland Dancing (SOBHD) have stated regarding underwear: "Dark or toning with the kilt should be worn, but not white." [9]

In 2015, the Scottish barmen of Hootananny pub in Inverness abandoned kilts because female customers sexually harassed them by lifting their kilts repeatedly. Ian Howie, the pub's assistant manager, said: "You get large groups of drinking women circling around when you are collecting glasses and asking whether you are true Scotsman – and they find out for themselves. Mainly hen nights." The traditional Scottish garment was initially chosen to give the venue a more authentic feel. Now Tartan shorts will be worn instead. [10] 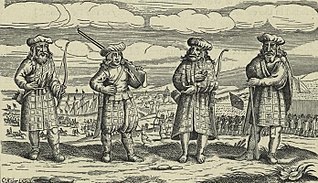 A kilt is a type of knee-length men’s dress skirt non-bifurcated with pleats at the back, originating in the traditional dress of Gaelic men and boys in the Scottish Highlands. It is first recorded in the 16th century as the great kilt, a full-length garment whose upper half could be worn as a cloak. The small kilt or modern kilt emerged in the 18th century, and is essentially the bottom half of the great kilt. Since the 19th century, it has become associated with the wider culture of Scotland, and more broadly with Gaelic or Celtic heritage. It is most often made of woollen cloth in a tartan pattern. 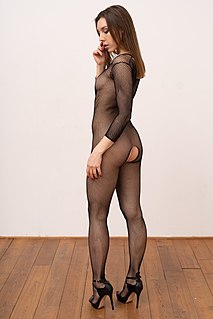 A bodystocking or body stocking is a one-piece skin-tight garment that covers the torso, legs and sometimes the arms of the wearer. It is a foundation garment or an article of lingerie usually made from a sheer fabric similar to that used for stockings or pantyhose, or from fishnet, lace or an opaque material, or a variation of these materials. A bodystocking differs from a unitard, which is worn as an outfit or article of clothing, and a leotard, which is used as a practice garment or performance costume for acrobats, gymnasts and other similar performers. Designed to be revealed, but not to be too revealing, bodystockings may be worn as undergarments by performers such as belly dancers and exotic dancers.

The Dress Act 1746 was part of the Act of Proscription which came into force on 1 August 1746 and made wearing "the Highland Dress" — including the kilt — illegal in Scotland as well as reiterating the Disarming Act. The Jacobite Risings between 1689 and 1746 found their most effective support amongst the Scottish clans, and this act was part of a series of measures attempting to bring the clans under government control. An exemption allowed the kilt to be worn in the army, continuing the tradition established by the Black Watch regiment. 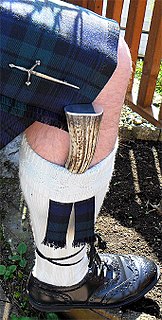 The sgian-dubh is a small, single-edged knife worn as part of traditional Scottish Highland dress along with the kilt. Originally used for eating and preparing fruit, meat, and cutting bread and cheese, as well as serving for other more general day-to-day uses such as cutting material and protection, it is now worn as part of traditional Scottish dress tucked into the top of the kilt hose with only the upper portion of the hilt visible. The sgian-dubh is normally worn on the same side as the dominant hand.

The sporran, a traditional part of male Scottish Highland dress, is a pouch that performs the same function as pockets on the pocketless kilt. Made of leather or fur, the ornamentation of the sporran is chosen to complement the formality of dress worn with it. The sporran is worn on a leather strap or chain, conventionally positioned in front of the groin of the wearer.

The Glengarry bonnet is a traditional Scots cap made of thick-milled woollen material, decorated with a toorie on top, frequently a rosette cockade on the left side, and ribbons hanging behind. It is normally worn as part of Scottish military or civilian Highland dress, either formal or informal, as an alternative to the Balmoral bonnet or Tam o' Shanter. 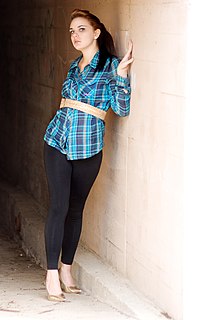 Leggings are several types of leg coverings that have varied through the years. Modern usage from the 1960s onwards has come to refer to elastic close-fitting high-rise garments worn over the legs typically by women, such as leg warmers or tights. Usage from the 18th century refers to men's wear, usually made of cloth or leather that is wrapped around the leg down to the ankle. In the 19th century, leggings usually referred to infants' leg clothing that were matched with a jacket, as well as leg-wrappings made of leather or wool and worn by soldiers and trappers. Leggings prominently returned to women's fashion in the 1960s, drawing from the form-fitting clothing of dancers. With the widespread adoption of the synthetic fibre Lycra and the rise in popularity of aerobics, leggings came to further prominence in the 1970s and '80s, and eventually made their way into streetwear. Leggings are a part of the late 2010s into the 2020's athleisure fashion trend of wearing activewear outside sporting activities and in casual settings. 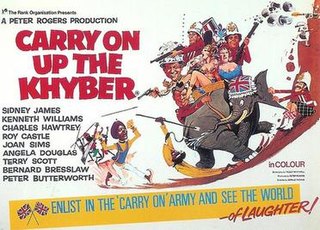 Carry On Up the Khyber is a 1968 British comedy film, the 16th in the series of 31 Carry On films (1958–1992). It stars Carry On regulars Sid James, Kenneth Williams, Charles Hawtrey, Joan Sims, Bernard Bresslaw and Peter Butterworth. It is the second of two Carry On film appearances by Wanda Ventham; and Roy Castle makes his only Carry On appearance, in the romantic male lead part usually played by Jim Dale. 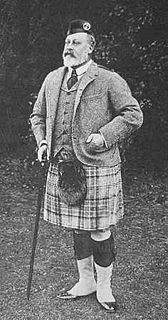 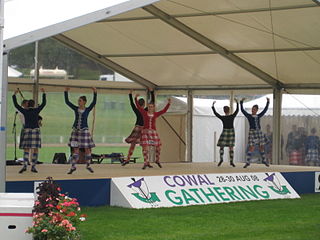 Highland dance or Highland dancing is a style of competitive dancing developed in the Scottish Highlands in the 19th and 20th centuries, in the context of competitions at public events such as the Highland games. It was created from the Gaelic folk dance repertoire, but formalised with the conventions of ballet', and has been subject to influences from outside the Highlands. Highland dancing is often performed with the accompaniment of Highland bagpipe music, and dancers wear specialised shoes called ghillies. It is now seen at nearly every modern-day Highland games event.

Spats, a shortening of spatterdashes, or spatter guards are a type of classic footwear accessory for outdoor wear, covering the instep and the ankle. Spats are distinct from gaiters, which are garments worn over the lower trouser leg as well as the shoe. 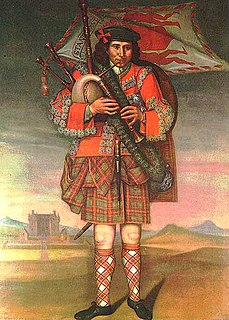 The belted plaid is a large blanket-like piece of fabric which is wrapped around the body with the material pleated or, more accurately, loosely gathered and secured at the waist by means of a belt. Typically, a portion of the belted plaid hangs down to about the knees or ankles with the rest of the material being wrapped up around the upper body in a variety of ways and pinned or otherwise secured to keep it in place. 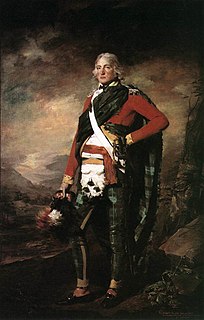 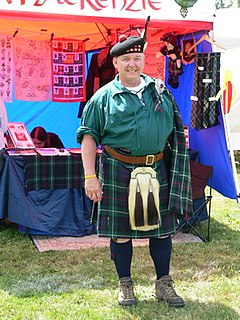 The modern, tailored kilt which is ubiquitous at Highland games gatherings around the world has associated with it an evolving style of wear. This style includes the accessories and other accoutrements which are typically worn with it. In this sense, it is very much like other items of the fashion world. 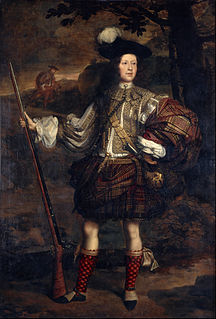 The history of the kilt stretches back to at least the end of the 16th century. The kilt first appeared as the belted plaid or great kilt, a full-length garment whose upper half could be worn as a cloak draped over the shoulder, or brought up over the head as a hood. The small kilt or walking kilt did not develop until the late 17th or early 18th century, and is essentially the bottom half of the great kilt.

Red Sea rig, sometimes known as gulf rig or schooner rig, is a dress code for semi-formal evening events, which in general consists of black tie attire with the jacket removed, a red bow tie and red cummerbund, although there are local variations. 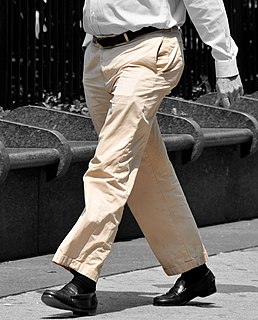 Trousers, slacks, or pants are an item of clothing that might have originated in Central Asia, worn from the waist to the ankles, covering both legs separately. 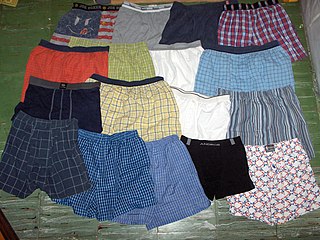