Tsaiorchis neottianthoides is a species of plant in the family Orchidaceae. It is endemic to China. [1] 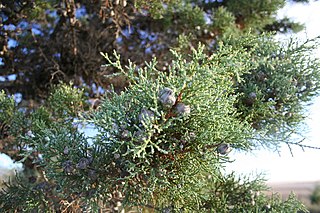 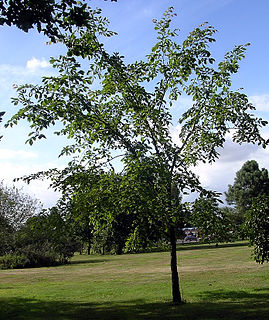 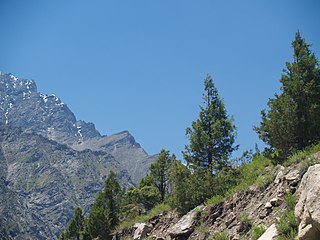 Cupressus torulosa, commonly known as the Himalayan cypress or Bhutan cypress, is a species of cypress tree native to the mountainous northern regions of the Indian subcontinent, primarily the Himalayas.

Trachycarpus nana is a species of flowering plant in the family Arecaceae. It is found only in China. Its natural habitat is subtropical or tropical moist lowland forests. It is threatened by habitat loss.

Adiantum fengianum is a species of maidenhair fern endemic to China. Its natural habitat is temperate forests. It is threatened by habitat loss.

Helicia is a genus of 110 species of trees and shrubs, constituting part of the plant family Proteaceae. They grow naturally in rainforests throughout tropical South and Southeast Asia, including India, Sri Lanka, Indochina, Peninsular Malaysia to New Guinea and as far south as New South Wales.

Helicia shweliensis is a species of plant in the family Proteaceae. It is endemic to China, where it is confined to Yunnan. It is threatened by habitat loss. The causes of habitat loss are attributed to a variety of factors, but the most prevalent factors include the destruction of forests in favor of constructing plantations for the production of cash crops.

Hopea shingkeng was a species of plant in the family Dipterocarpaceae. It was endemic to the eastern Himalaya region of India.

Disepalum plagioneurum is a species of plant in the Annonaceae family. It is found in China and northern Viet Nam.

Richella hainanensis is a species of plant in the Annonaceae family. It is endemic to China.

Saruma is a monotypic genus of flowering plants in the family Aristolochiaceae containing the single species Saruma henryi. It is endemic to China, where it occurs in Gansu, Guizhou, Hubei, Jiangxi, Shaanxi, and Sichuan.

Aleuritopteris albofusca is a species of fern in the family Pteridaceae. It is endemic to China, including Tibet. Its natural habitat is subtropical or tropical dry forests. It is threatened by habitat loss.

Merrilliopanax alpinus is a species of plant in the family Araliaceae. It is found in Tibet (China), Bhutan, northeast India, and Nepal.

Tabernaemontana pandacaqui, known as windmill bush and banana bush, is a species of plant in the dogbane family Apocynaceae.

Calamus nambariensis is a species of flowering plant in the family Arecaceae. It is found in Burma, Laos, Vietnam, Thailand, Nepal, Bhutan, Bangladesh, the Assam region of India and the Yunnan region of China.

Tsaiorchis keiskeoides is a species of flowering plant in the family Orchidaceae, native to northern Vietnam.