Ultraspank was an American metal band from Santa Barbara, California, United States, in the late 1990s and early 2000s. They released two albums, a self-titled album in 1998, and a follow-up, Progress , in 2000. The band disbanded shortly after the release of Progress in 2001 due to being dropped by their label due to poor sales of both albums.

The band was formed soon after the breakup of the band Indica, which contained three of the five original Ultraspank members; Tyler Clark, Dan Ogden, and Pete Murray, [6] not to be confused with Australian singer Pete Murray. The three of them want to continue making music together, they wanted to change their sound, so they enlisted the help of Neil Godfrey, and eventually Jerry Oliveria, a bandmate of his in a previous band named "Good Mourning". [6] They originally formed the band as "Spank", but due to legal reasons they were forced to change it. Rob Zombie suggested they should call themselves Ultraspank, [7] and the band ended up taking his suggestion.

In 1997, the band signed to Epic Records. The band decided to go with this label due to them being famous at the time for previously breaking other heavy bands such as Korn and Rage Against the Machine into mainstream popularity. [8] Their debut, self-titled album was released on March 31, 1998. While the president of the company at the time of their signing fully supported the band, he was shortly afterwards fired, and the band received less support from the new president. [8] Despite the lack of support, the band still toured tirelessly for two years, mostly on their own support, even using their own tour van, which racked up over 100,000 miles during the time. [8]

The band became demoralized with all the work being put into without any backing from the label. However, the band received another break. They were able to get one of their songs, "Five", on the PlayStation video game 3Xtreme. This brought the band a ton of exposure, as it was quoted as selling "400,000 units" and "far more than their first album sold". This brought them more support from Epic, so the band started work on a follow-up album. [8]

After the heavy touring in support of their first album, the band returned to the studio for their followup Progress. Sonically, vocalist described the goal of the album was that he "wanted to go further out on the melodic tip. As a band, our groove is one of the things we pride ourselves on the most, but there's a lot more melody on this record. It's not happy melody, but it's still emotional music." [9]

The name of the album represented a number of things for the band. Jerry Oliviera expanded on this in an interview, saying it's "...a statement on where we're heading together as a society. The cover is a real photo, from a genetic engineering project, of a mouse with a human ear growing out of its back. It's supposed to be like, 'we're growing ears out of animals' backs. Yeah, that's progress.'". [9] The album name also represented the album's matured sound in comparison to the first, in its using of acoustic guitar, and using programming more to their advantage. [9]

Murray claims that the recording sessions were so intense, that there were many times where he or Godfrey would need to leave for a break, and that the album can still be hard for them to listen to on an emotional level. [6]

Progress was released on May 30, 2000, but didn't sell very well, yet again due to a lack of promotion. [7] As a result, the band was dropped by their record label, leading to a breakup.

After the break up, Murray took some time away from music, while Godfrey joined downthesun and Motograter for a short period. After leaving those bands, he went on to form Lo-Pro with former vocalist Murray in 2002. The band has released two albums, a self-titled release in 2003 and The Beautiful Sounds of Revenge in 2010, and the band is still presently together.

In 2008, rumors arose about the band reuniting. However, things had been taken out of context, as what was being referenced to was the fact that guitarist Oliviera was joining Lo-Pro as a replacement bassist, making it so now Lo-Pro had three Ultraspank members in the band. The "reuniting" was the fact that Murray, Godrey, and Oliviera all played on Lo-Pro's 2010 release The Beautiful Sounds of Revenge as they had in both Ultraspank releases.

Morcheeba is an English electronic band formed in the mid-1990s with founding members vocalist Skye Edwards and the brothers Paul and Ross Godfrey. They mix influences from trip hop, rock, folk rock and downtempo, and have produced nine regular studio albums since 1995, two of which reached the UK top ten. Edwards left the band in 2003, after which the brothers used a number of singers before she rejoined in 2009. They recruit additional members for their live performances and have toured internationally. In 2014 Paul Godfrey resigned from the band. Edwards and Ross Godfrey later formed Skye | Ross and released a self-titled album in September 2016. Their latest studio album as Morcheeba, Blaze Away, was released in June 2018. 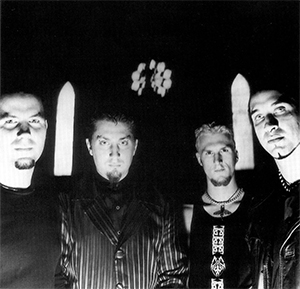 Nothingface was an American heavy metal band from Washington, D.C., formed in 1993. Their best-known and most prolific line-up consisted of Matt Holt (vocals), Tom Maxwell (guitar), Bill Gaal (bass) and Chris Houck (drums). They disbanded in 2004, only to reform the following year, reuniting with Gaal and Houck, and then disband four years later. In 2017, Matt Holt died from a degenerative disease.

Lo-Pro is an American rock band formed in 2002 by Pete Murray and Neil Godfrey after the disbandment of their previous band, Ultraspank, in 2001. After attracting the attention of Aaron Lewis of Staind, the band signed to a major record label, Geffen Records, and released their debut album, Lo-Pro in 2003. After a year of touring in support of the album, they would be dropped from their label. The band stayed together, but it would be almost six years until any further music releases, with the band opting to record and re-record several album's worth of material, participate in side-projects, and perform live shows prior to finalizing new material for release.

Lo-Pro is the debut studio album of Lo-Pro, released on September 30, 2003. It had one single in "Sunday" which garnered considerable radio play upon release. Throughout 2003 and 2004, Lo-Pro toured with groups like Staind and Three Days Grace in promotion of the album before being dropped from their record label. 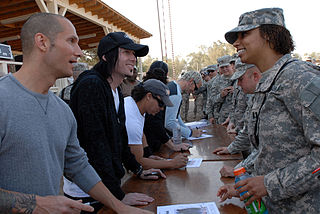 Tommy Stewart is an American drummer, currently for the rock band Lo-Pro. He is probably best known for his stint with the band Godsmack. He has also toured and recorded with a number of other bands including Detroit based metal band Halloween "The Heavy Metal Horror Show", glam rock band Lillian Axe, and alternative rock bands Fuel and Everclear.

Lunatic Calm were an English electronic music group formed in 1996. Despite a wide-ranging sound palette, the group was best known for their high impact, industrial-tinged big beat compositions.

Ultraspank is the debut studio album by the American nu metal band Ultraspank. It was released on March 31, 1998 on Epic Records. 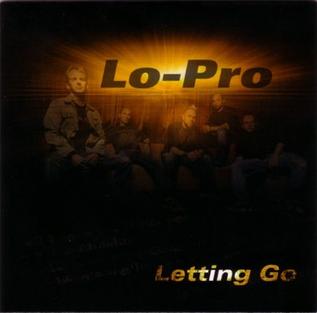 Letting Go is the EP of Lo-Pro, initially available only during concerts in July and August during the "Stimulate This" Tour with Staind, Shinedown, Chevelle and Halestorm. It was reported to be released digitally in September 2009, but was eventually pushed back to October 21, 2009. This is their first formal release of music in six years, since their self-titled album in 2003. In the past, Lo-Pro has claimed to be working on "over 26 songs" for a future release. Despite this, five of the six tracks on it were later put on their full-length album The Beautiful Sounds of Revenge, to be released on June 8, 2010.

Progress is the second and final album by American industrial metal band Ultraspank. This is the only album to feature former Snot drummer James "Fed" Carroll. 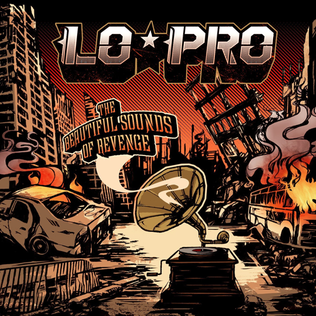 The Beautiful Sounds of Revenge is the second full-album by Lo-Pro, originally scheduled to be released was May 25, 2010, but was delayed to June 8, 2010, in order to add more songs to it. It is their third formal release of music, after their self-titled release in 2003 and the Letting Go EP in 2009. The album is described by leader singer and songwriter Pete Murray as "a diary of the Lo-Pro experience" over the course of the seven years it took to make the album. The album's only single was "Alive".

Chokt is an American industrial rock band featuring Pete Murray of Lo-Pro and Ultraspank, Walter Flakus of Stabbing Westward, and John Stevens of Ghost Machine and The Clay People. The trio recorded an album's worth of material together, releasing songs one by one over the course of 2006 to 2009. It served as an outlet for Murray for songs that didn't quite fit the hard rock sound of Lo-Pro, during the six year gap in between Lo-Pro releases.

Bittersweet is the first studio album by Life On Planet 9, the pseudonym used by American hard rock band Lo-Pro when releasing music of a more experimental nature. The album was released on August 20, 2011. The album's origins trace back as far as 2007, when Lo-Pro participated in an acoustic tour with Staind frontman Aaron Lewis. Tracks started as acoustic rock material, but as they developed, they gained further ambient and electronic elements. The sound strayed so far from their original hard rock sound that they decided to release it under another name.

Disintegration Effect is the third studio album by American hard rock band Lo-Pro. It was released on May 14, 2013. The album was a departure from the prior two Lo-Pro albums, while half of the album retained the band's usual melodic hard rock sound, half contained more screamed vocals more reminiscent of members Pete Murray and Neil Godfrey's prior band, Ultraspank.

White Noise Owl is a rock supergroup composed of lead vocalist Pete Murray of Lo-Pro and Ultraspank, bassist John Fahnestock of Lo-Pro, Snot, and Amen, drummer Will Hunt of Evanescence and Dark New Day, and guitarist Chris Shy of Aurora Sky. Their debut EP, produced by Ben Grosse, Until We Meet Again, was released on March 11, 2014. After a series of delays, their debut fell-length album, Condition Critical, is scheduled for release on November 1, 2019. The first single, "Something", was released on August 1, 2017.

Until We Meet Again is the debut extended play (EP) by rock supergroup White Noise Owl. It was released on March 11, 2014. A promotional single, "Feed", was released a week prior on March 5, 2014, while "End Over End" was later released as the EPs first and only official single.

The Theory of Everything is the second studio album by Life On Planet 9, the pseudonym used by American hard rock band Lo-Pro when releasing music of a more experimental sound. The first album under the moniker, Bittersweet, had been more of an outlet for Lo-Pro's acoustic songs that had taken on too many electronic rock elements to be billed an acoustic album. The Theory of Everything largely disavows the acoustic elements in favor of electronic elements coupled with melodic guitar-work. It was released on August 26, 2014.

Pete Murray is an American musician and singer-songwriter. Starting his music career in the mid-1990s, he has been the lead vocalist for a number of bands, including nu metal band Ultraspank, hard rock band Lo-Pro, acoustic/electronic rock band Life On Planet 9, industrial rock band Chokt, and most recently, rock band White Noise Owl.

Higher is the third studio album by Life On Planet 9, the pseudonym for experimental releases for American hard rock band Lo-Pro. It was released on January 31, 2017.

Condition Critical is the debut full-length studio album by American rock band White Noise Owl. Initially due shortly after their debut EP Until We Meet Again, the release saw multiple delays until receiving its final release date, November 1, 2019. The album's first single, "Something, was released over two years prior to the album release, on August 1, 2017. The second single, "Maybe It's Time", was released in October 2019.