University Hospital Lewisham (formerly known as Lewisham Hospital) is an acute district general hospital run by Lewisham and Greenwich NHS Trust and serving the London Borough of Lewisham. [1] It is now affiliated with King's College London and forms part of the King's Health Partners academic health science centre. It is situated on Lewisham High Street between Lewisham and Catford.

A report in The Lancet in 1865 showed that the workhouse was essentially functioning as a hospital at that time: “Sick, infirm, and able-bodied – so called at least, but we saw none in the entire house – were placed in close approximation”. At that time there were seven “sick wards”, with 72 beds, and four “infection wards” with 22 beds. [3] Land to the north of the workhouse was used to construct a separate infirmary from 1892, and this was formally opened in 1894. [4]

During the First World War the infirmary became the Lewisham Military Hospital. Most workhouse inmates were relocated, but parts of the workhouse still functioned until 1929. [5] During the Second World War the hospital was hit by a V-1 flying bomb, which destroyed two wards, injured 70 people and killed one nurse. [6]

Following the formation of the National Health Service in 1948, the hospital continued to expand with new buildings opened in the 1950s and 1960s. These included the Outpatients Department in 1958, and an extension to the Accident Department in 1964. [7] In 1954 a premature baby unit was opened, and in 1968 this was replaced by a Special Care Baby Unit. [8] In 1968 the Intensive Therapy Unit was also opened – this was the first such unit in a district general hospital in England. [8]

Further improvements culminated in the construction of the Riverside Building which was procured under a Private Finance Initiative contract in 2004. The works were designed by RTKL Associates and completed by Carillion at a cost of £58 million in December 2006. [9] The building was officially opened by Archbishop Desmond Tutu in May 2007. [10] It reflects current thinking about patient care, replacing Nightingale wards with multiple four-bedded bays. The design also reflects contemporary environmental concerns and was the first major NHS building to generate a proportion of its own power using photovoltaic panels installed on the roof. [8]

In July 2012, South London Healthcare NHS Trust [12] was put into financial administration. A government report in 2012 recommended that three SLHT hospitals should be taken over by nearby NHS trusts and that the University Hospital Lewisham Accident and Emergency unit should close, [13] with A&E patients instead going to the SLHT-run Queen Elizabeth Hospital in Woolwich to make that hospital more viable. [14]

There was a strong campaign in Lewisham against the proposed closure, including a march on 24 November 2012 [15] and a successful legal challenge. In July 2013, the High Court ruled that the closure of Lewisham A&E could not go ahead. [16] In October 2013, the Court of Appeal ruled that Health Secretary Jeremy Hunt did not have power to implement cuts at Lewisham Hospital. [17] The director of the Save Lewisham Hospital campaign described this as "a complete victory". [18]

The hospital offers a wide range of services including adult and children's Emergency departments and specialist services including neonatology, paediatric surgery, cystic fibrosis treatment, haemophilia treatment and Ear Nose and Throat (ENT) services. The hospital provides teaching and training for medical staff and gained university status in 1997. The Ladywell Unit on the premises is operated by the South London and Maudsley NHS Foundation Trust. [19] 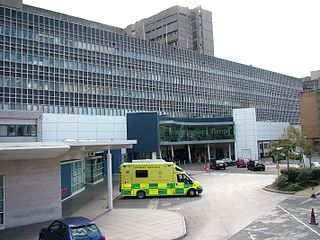 St George's University Hospitals NHS Foundation Trust, formerly called St George's Healthcare NHS Trust, is based in Tooting in the London Borough of Wandsworth, and serves a population of 1.3 million across southwest London. A large number of services, such as cardiothoracic medicine and surgery, neurosciences and renal transplantation, also cover significant populations from Surrey and Sussex, totalling about 3.5 million people.

Southmead Hospital is a large public National Health Service hospital, situated in the area of Southmead, though in Horfield ward, in the northern suburbs of Bristol, England. It is part of the North Bristol NHS Trust. The 800-bed Brunel Building opened in May 2014, to provide services, which transferred from Frenchay Hospital in advance of its closure. The hospital site covers 60 acres (24 ha).

Sandwell and West Birmingham NHS Trust is one of the largest National Health Service teaching Trusts in England and comprises Sandwell General Hospital in West Bromwich, City Hospital, Birmingham and Rowley Regis Hospital. The Trust was established on 1 April 2002 following approval given by the Secretary of State for Health to amalgamate Sandwell Healthcare NHS Trust and City Hospital NHS Trust. 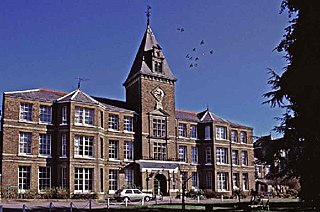 Chase Farm Hospital is a hospital in The Ridgeway, in Gordon Hill, Enfield, run by the Royal Free London NHS Foundation Trust.

Central Middlesex Hospital is in the centre of the Park Royal business estate, on the border of two London boroughs, Brent and Ealing. It is managed by the London North West University Healthcare NHS Trust.

The Tees, Esk and Wear Valleys Foundation NHS Trust is an NHS trust that provides local mental health, learning disability and eating disorders services. It covers the 1.4 million people living in County Durham, the Tees Valley and most of North Yorkshire, England.

South London and Maudsley NHS Foundation Trust, also known as SLaM, is an NHS foundation trust based in London, England, which specialises in mental health. It comprises three psychiatric hospitals, the Ladywell Unit based at University Hospital Lewisham, and over 100 community sites and 300 clinical teams. SLaM forms part of the institutions that make up King's Health Partners, an academic health science centre.

Lewisham and Greenwich NHS Trust is an NHS trust which was formed on 1 October 2013 and is responsible for running two acute hospitals, Queen Elizabeth Hospital and University Hospital Lewisham, in addition to community health services in Lewisham.

Kingston Hospital is an acute hospital in Kingston upon Thames. It is managed by the Kingston Hospital NHS Foundation Trust. It has an Accident & Emergency Unit, a popular midwife-led Maternity unit, and an STD clinic known as the Wolverton Centre.

Innisfree Ltd is a fund management company based in the United Kingdom which manages substantial interests in private finance initiative (PFI) schemes in the UK, Canada, Sweden and Holland. It invests funds in social infrastructure projects, such as hospitals and schools, on behalf of institutional investors such as local authority pension funds. The company has a portfolio of 56 projects with a capital value of over £18 billion.