Wayne Larkins (born 22 November 1953) [1] is an English former cricketer, who represented Northamptonshire, Durham and Bedfordshire as an opening batsman throughout his career. He was selected to play for England as Graham Gooch's opening partner on tours of Australia and the West Indies. Although a talented player, Larkins is considered as something of an underachiever at the top level. [1] County bowlers such as Jonathan Agnew spoke of being "Nedded" when he performed well against them.[ citation needed ] The cricket correspondent, Colin Bateman, opined, "Larkins was usually ignored when he should have been selected and selected when he should have been ignored in a career of unfulfilled potential. A destructive opening bat who could demolish any attack if he got going, 'Ned' tired of waiting for England and joined the 1982 rebel tour to South Africa". [1]

Born in Roxton, Bedfordshire, [1] Larkins played cricket for Northamptonshire from 1972 until 1991. He moved to first-class newcomers Durham in 1992, retiring from the first-class game in 1995. He scored 27,142 first-class runs in 482 matches, with 59 centuries and a highest score of 252. He also snared 42 wickets with his medium pace.

Larkins appeared in thirteen Test matches for England, scoring three fifties, and in twenty five ODIs. He was a strong force in domestic one-day cricket, playing 485 matches and scoring 13,594 runs with 26 hundreds. [2]

Outside cricket, he was a keen footballer. In his youth, he had been on the books of Notts County. He also played non-league football for Wolverton Town, Wellingborough Town [3] and Buckingham Town, although he missed part of the 1985 season after gashing his leg during a match.[ citation needed ]

In October 2006, Larkins pleaded guilty to attempting to illegally obtain a mortgage secured against the house of his girlfriend's sick father. With his girlfriend Deborah Lines, he bought a home in France. [4] On 20 April 2007, he was given a 12-month suspended sentence, and was ordered to repay money from the sale of the property. [5]

John Hugh Edrich, is an English former first-class cricketer who, during a career that ran from 1956 to 1978, was considered one of the best batsmen of his generation. Born in Blofield, Norfolk, Edrich came from a cricketing family, his four cousins, Eric Edrich, Bill Edrich, Geoff Edrich and Brian Edrich, all having played first-class cricket. He was educated at the private Bracondale School between the ages of eight and seventeen, during which time he played cricket at weekends and was coached by former cricketer C. S. R. Boswell.

Raman Subba Row is a former cricketer who played for England, Cambridge University, Surrey and Northamptonshire.

Peter Edward Richardson was an English cricketer, who played for Worcestershire and Kent County Cricket Clubs and in 34 Test matches for the England cricket team.

Alan Christopher Smith, often known as A. C. Smith, is an English former Test cricketer, who appeared in six Tests for England. Primarily a wicket-keeper, Smith was also a capable right-handed middle-order batsman and right-arm seam bowler. Very unusually for a regular wicket-keeper, he was sometimes selected by Warwickshire as a frontline bowler.

David John Capel was an English cricketer who played for Northamptonshire and England. Cricket writer Colin Bateman noted that "Capel was one of those unfortunate cricketers who became tagged as being the next all-rounder to fill Ian Botham's boots". He was well known for his long stint with Northamptonshire as a player as well as coach for nearly 32 years. He was regarded as one of the icons of the Northamptonshire club. He died on 2 September 2020, at the age of 57, after being diagnosed with a brain tumour in 2018.

Ken Taylor is an English former cricketer, who played in three Tests for England from 1959 to 1964. He also played first-class cricket for Yorkshire. He was renowned as a good player of spin and was one of the best cover fielders of his generation, while his medium pace 'darts' broke many a stubborn partnership for his county captains, Vic Wilson and Brian Close.

Colin Milburn was an English cricketer, who played in nine Test matches for England, before an accident led to the loss of much of his sight and prompted his retirement. 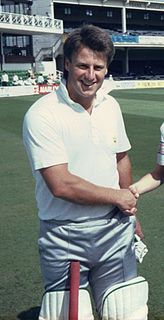 Raymond Swann is a former English cricketer. Swann was a right-handed batsman who bowled right-arm medium pace. He was born at Stannington, Northumberland.

Gareth Smith is a former English cricketer. Smith was a right handed batsman who bowled left-arm fast-medium. He was born at Jarrow, County Durham.

Andrew Richard Roberts is a former English cricketer. Roberts was a right-handed batsman who bowled leg break. He was born in Kettering, Northamptonshire and is the brother of cricketer Timothy Roberts.