The .223 Remington (designated as the 223 Remington by the SAAMI [3] and 223 Rem by the CIP [4] ) is a rimless, bottlenecked rifle cartridge. It was developed in 1957 by Remington Arms and Fairchild Industries for the U.S. Continental Army Command of the United States Army as part of a project to create a small-caliber, high-velocity firearm. The .223 Remington is considered one of the most popular common use cartridges and is currently used by a wide range of semi-automatic and manual-action rifles as well as handguns.

The development of the cartridge, which eventually became the .223 Remington, was linked to the development of a new lightweight combat rifle. The cartridge and rifle were developed by Fairchild Industries, Remington Arms, and several engineers working toward a goal developed by U.S. Continental Army Command (CONARC). Development began in 1957. A project to create a small-caliber, high-velocity (SCHV) firearm was created. Eugene Stoner of ArmaLite was also invited to scale down the AR-10 (7.62×51mm NATO) design. [5] Winchester was also invited to participate. [6] [7]

CONARC ordered rifles to test. Stoner and Sierra Bullet's Frank Snow began work on the .222 Remington cartridge. Using a ballistic calculator, they determined that a 55-grain bullet would have to be fired at 3,300 ft/s to achieve the 500-yard performance necessary. [7]

Robert Hutton (technical editor of Guns and Ammo magazine) started the development of a powder load to reach the 3,300 ft/s goal. He used DuPont IMR4198, IMR3031, and an Olin powder to work up loads. Testing was done with a Remington 722 rifle with a 22" Apex barrel. During a public demonstration, the round successfully penetrated the US steel helmet as required, but testing also showed chamber pressures to be too high. [6] [7]

Stoner contacted both Winchester and Remington about increasing the case capacity. Remington created a larger cartridge called the .222 Special. This cartridge is loaded with DuPont IMR4475 powder. [7]

In 1961, marksmanship testing compared the AR-15 and M-14; 43% of ArmaLite AR-15 shooters achieved Expert, while only 22% of M-14 rifle shooters did. Le May ordered 80,000 rifles. [7] In July 1962, operational testing ended with a recommendation for the adoption of the ArmaLite AR-15 rifle chambered in .223 Remington. [7] In September 1963, the .223 Remington cartridge was officially accepted and named "Cartridge, 5.56 mm ball, M193". The following year, the ArmaLite AR-15 was adopted by the United States Army as the M16 rifle, and it would later become the standard U.S. military rifle. The specification included a Remington-designed bullet and the use of IMR4475 powder, which resulted in a muzzle velocity of 3,250 ft/s and a chamber pressure of 52,000 psi. [7]

In the spring of 1962, Remington submitted the specifications of the .223 Remington to the Sporting Arms and Ammunition Manufacturers' Institute (SAAMI). In December 1963, Remington introduced its first rifle chambered for .223 Remington a Model 760 rifle. [6] According to the official CIP rulings, the .223 Remington can handle up to 430.00 MPa (62,366 psi) Pmax piezo pressure. In CIP-regulated countries, every rifle cartridge combination has to be proofed at 125% of this maximum CIP pressure to certify for sale to consumers. [4] This means that .223 Remington chambered arms in CIP-regulated countries are currently (2016) proof tested at 537.50 MPa (77,958 psi) PE piezo pressure. This is equal to the NATO maximum service pressure guideline for the 5.56×45mm NATO cartridge.

The .223 Remington and 5.56×45mm NATO barrel chamberings are not the same. [14] While the cartridges are identical other than powder load, bullet weight, and chamber pressure, a significant difference is in barrel of the rifle to be used, not in the cartridge. The 5.56×45mm NATO chambers are dimensionally larger in certain critical areas than .223 Remington chambers. As the chambers differ accordingly the head space gauges used for the two chamberings differ. [15]

The table contains some estimated pressures based on normal proofing practice and on the known increases in pressure caused by bullet setback (which is a similar occurrence with regard to pressure). The proof pressure of M197 is 70,000 psi. [18]

The following table shows the differences in nomenclature, rifling, throating, and normal, maximum, and safe pressures: [7] [6]

Beside the NATO EPVAT testing pressure testing protocols the other employed peak pressure measurement methodology or methodologies to correlate this table remain unknown.

Effects of barrel length on velocity

The .223 Remington has become one of the most popular cartridges and is currently used in a wide range of semiautomatic and manual-action rifles and even handguns, such as the Colt AR-15, Ruger Mini-14, Remington Model 700, Remington XP-100, etc. [20] [21] The popularity of .223 Remington is so great, that in the US it virtually eliminated all other similar .22 caliber center-fire varmint rifle cartridges. [22] [23] 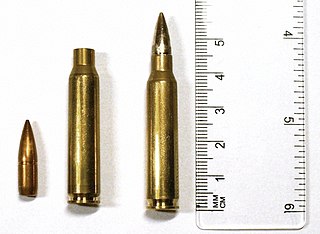 The 5.56×45mm NATO is a rimless bottlenecked intermediate cartridge family developed in the late 1970s in Belgium by FN Herstal. It consists of the SS109, L110, and SS111 cartridges. On 28 October 1980 under STANAG 4172 it was standardized as the second standard service rifle cartridge for NATO forces as well as many non-NATO countries. Though they are not entirely identical, the 5.56×45mm NATO cartridge family was derived from and is dimensionally similar to the .223 Remington cartridge designed by Remington Arms in the early 1960s.

The .308 Winchester is a smokeless powder rimless bottlenecked rifle cartridge.

The 6.8mm Remington Special Purpose Cartridge is a rimless bottlenecked intermediate rifle cartridge that was developed by Remington Arms in collaboration with members of the U.S. Army Marksmanship Unit and United States Special Operations Command to possibly replace the 5.56 NATO cartridge in Short Barreled Rifles (SBR) and Carbines. Based on the .30 Remington cartridge, it is midway between the 5.56×45mm NATO and 7.62×51mm NATO in bore diameter. It uses the same diameter bullet as the .270 Winchester hunting cartridge. 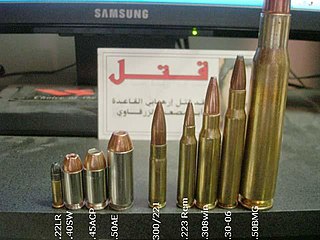 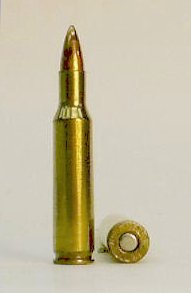 The 7mm Remington Magnum rifle cartridge was introduced as a commercially available round in 1962, along with the new Remington Model 700 bolt-action rifle. It is a member of the belted magnum family that is directly derived from the venerable .375 H&H Magnum. The original purpose of the belted magnum concept taken from the .300 H&H Magnum and .375 H&H Magnum, was to provide precise headspace control, since the sloping shoulders, while easing cartridge extraction, were unsuitable for this purpose. Improved cartridge extraction reliability is desirable while hunting dangerous game, in particular when a fast follow-up shot is required. The 7mm Remington Magnum is based on the commercial .264 Winchester Magnum, .338 Winchester Magnum, and .458 Winchester Magnum, which were based on the same belted .300 H&H Magnum and .375 H&H Magnum cases, trimmed to nearly the same length as the .270 Weatherby Magnum.

The 6.5mm Creedmoor (6.5×48 mm), designated 6.5 Creedmoor by SAAMI, 6.5 Creedmoor by the C.I.P. or 6.5 CM or 6.5 CRDMR for short, is a centerfire rifle cartridge introduced by Hornady in 2007. It was developed by Hornady senior ballistics scientist Dave Emary in partnership with Dennis DeMille, the vice-president of product development at Creedmoor Sports, hence the name. The cartridge is a necked-down modification of the .30 Thompson Center. 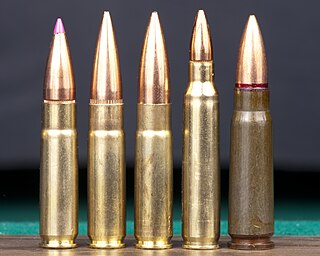 The .300 AAC Blackout, also known as 7.62×35mm, is an intermediate cartridge developed in the United States by Advanced Armament Corporation (AAC) for use in the M4 carbine. The cartridge yields increased performance in shorter barrels and effective subsonic performance for suppressor use when compared to 5.56mm NATO. The 300 AAC Blackout utilizes standard 5.56mm NATO magazines and components with the exception of the barrel.

A .223 Wylde chamber is a hybrid rifle chamber designed to allow .22 caliber barrels to safely fire both .223 Remington and 5.56×45mm NATO ammunition. While the cartridge dimensions of both rounds are the same, 5.56 NATO loads produce pressures in excess of the .223 safe spec. The 5.56 chamber has angular differences that allow higher pressures safely. The .223 can be fired from a 5.56 chamber safely but with reduced accuracy. The Wylde is a hybrid chamber designed to allow both ammunition types to be safely fired with good accuracy.

The .277 Wolverine (6.8×39mm) is a wildcat cartridge. It is a multi-purpose mid-power cartridge with increased ballistic performance over the AR-15's traditional .223 Remington cartridge requiring only a new barrel to upgrade/convert any 5.56-based firearm to .277 Wolverine.

The 6 mm Advanced Rifle Cartridge (6×38mm), or 6mm ARC for short, is a 6mm (.243) caliber intermediate rifle cartridge introduced by Hornady in 2020, as a low-recoil, high-accuracy long-range cartridge designed for the AR-15 platform.

Wikimedia Commons has media related to .223 Remington .
This page is based on this Wikipedia article
Text is available under the CC BY-SA 4.0 license; additional terms may apply.
Images, videos and audio are available under their respective licenses.