The 1982 El Salvador earthquake occurred southeast of San Salvador on 19 June at 00:21 local time (06:21 UTC). This undersea earthquake struck offshore in the Pacific Ocean and had a surface wave magnitude of 7.2 and a maximum Mercalli intensity of VII (Very strong). Occurring adjacent to a subduction zone at the Middle America Trench, this normal-slip shock left at least 16 and as many as 43 people dead, and many injured, and also inflicted $5 million in damage. Near the Salvadorian coast, the Cocos Plate is subducting beneath the Caribbean Plate at the Middle America Trench. This earthquake was an intra-slab, normal-slip subduction earthquake in the subducting plate. The subduction zone and a local system of faults along the volcanic chain are two major sources of the earthquakes in El Salvador. [5] 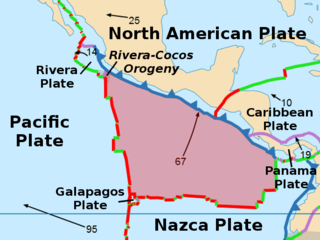 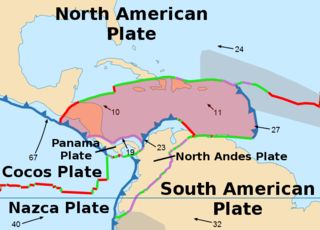 The mechanism of this earthquake had many similarities with the El Salvador earthquake of 13 January 2001. [6]

Ahuachapán is a city and municipality and the capital of the Ahuachapán Department in western El Salvador. The municipality including the city covers an area of 244.84 km² and as of 2007 has a population of 110,511 people. Situated near the Guatemalan border, it is the westernmost city in the country and is the center of an agricultural region producing primarily coffee.

Comasagua is a municipality in the La Libertad department of El Salvador.

Episodic tremor and slip (ETS) is a seismological phenomenon observed in some subduction zones that is characterized by non-earthquake seismic rumbling, or tremor, and slow slip along the plate interface. Slow slip events are distinguished from earthquakes by their propagation speed and focus. In slow slip events, there is an apparent reversal of crustal motion, although the fault motion remains consistent with the direction of subduction. ETS events themselves are imperceptible to human beings and do not cause damage.

The 1717 Guatemala earthquake struck Guatemala on September 29 with an estimated moment magnitude of 7.4, and a Mercalli intensity of approximately IX (Violent). The earthquake essentially destroyed much of the architecture of Antigua Guatemala, which was the colonial capital of Central America at the time. Over 3,000 buildings were ruined including many temples and churches. Such was the effect of the disaster that the authorities considered moving the headquarters to a settlement which was less prone to natural disasters.

The Nankai Trough is a submarine trough located south of the Nankaidō region of Japan's island of Honshū, extending approximately 900 km offshore. The underlying fault, the Nankai megathrust, is the source of the devastating Nankai megathrust earthquakes, while the trough itself is potentially a major source of hydrocarbon fuel, in the form of methane clathrate.

The 1965 Puget Sound earthquake occurred at 08:28 PDT on 29 April within the Puget Sound region of Washington State. It had a magnitude of 6.7 on the moment magnitude scale and a maximum perceived intensity of VIII (Severe) on the Mercalli intensity scale. It caused the deaths of seven people and about $12.5–28 million in damage. There were no recorded aftershocks. 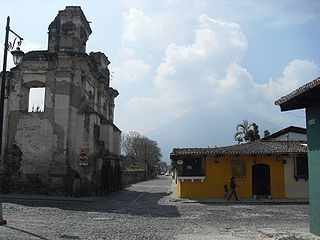 The 1773 Guatemala earthquake struck Guatemala on July 29 at 15:45 local time. It had an estimated epicentral magnitude of 7.5 Mi. It was part of a sequence that started in May that year. There were two strong foreshocks on June 11 and the mainshock was followed by numerous aftershocks which lasted until December 1773. The series of all these earthquakes is also referred to as the Santa Marta earthquake(s) as it had started on the feast day of Saint Martha.

The 1965 Oaxaca earthquake occurred in Mexico on August 23 at 13:46 with a moment magnitude of 7.5. Five people were reported dead in Mexico City and 1 in Oaxaca. There was an anomalous change in seismic activities before the earthquake. There was a quiescent stage from late 1963 to mid-1964, and it was followed by a renewal of seismic activities before the main shock. This earthquake was a shallow thrust earthquake in the interplate subduction zone, in which the Cocos Plate is subducting beneath the North American Plate.

The 1994 offshore Sanriku earthquake occurred on December 28, 1994, at 12:19 UTC. This was a magnitude Mw 7.7 earthquake with epicenter located in the Pacific Ocean at about 180 km east of Hachinohe, Aomori. Three people were reported dead and more than 200 injured; 48 houses were completely destroyed. Road damage and power outages were reported. Liquefaction occurred in the Hachinohe Port area. The intensity reached shindo 6 in Hachinohe, Aomori, about 187.6 km from epicenter. It could be felt in Tokyo, about 632.9 km from epicenter, with shindo 2. The Japanese Meteorological Agency put the magnitude at MJMA 7.5. Slip associated with this earthquake continued for more than a year and it has been termed an 'ultra-slow earthquake'.

The 1941 Colima earthquake occurred on April 15 at 19:09 UTC. The epicenter was located in the State of Michoacán, Mexico.

The 1953 Tumbes earthquake occurred on December 12 at 12:31:29 local time near the border between Peru and Ecuador. The shock had a moment magnitude of 7.5, a maximum Mercalli Intensity of VIII (Severe), and occurred in the northwestern offshore area of Tumbes, Peru.

The 1942 Peru earthquake occurred on August 24 at 17:50 local time and was located near the border of the departments of Ica and Arequipa, Peru. It had a magnitude of Mw 8.2 or Ms 8.4.