The Washington Nationals' 2008 season was the fourth season for the franchise in the District of Columbia, and the 40th since the original team was started in Montreal, Quebec, in 1969. It also marked the first season the Nationals played at Nationals Park. The team finished in last place in the National League East with a record of 59–102, the worst record in Major League Baseball. This prompted an updated version of a running joke that originated with the American League's Senators: "Washington: First in war, first in peace, and last in the National League."

On November 30, 2007, the Nationals traded Ryan Church and Brian Schneider to the New York Mets for Lastings Milledge. [1] On December 3, 2007, they traded minor-leaguer Glenn Gibson to the Tampa Bay Devil Rays for Elijah Dukes, [2] and on the following day they traded Jonathan Albaladejo to the New York Yankees for Tyler Clippard. [3]

The Nationals′ marketing slogan for 2008 was "Welcome Home." The slogan welcomed Nationals fans to their new "home" at Nationals Park, where the Nationals began play in 2008 after three seasons at Robert F. Kennedy Memorial Stadium. [4]

The Nationals opened the 2008 MLB season by hosting the Atlanta Braves in a nationally televised night game on March 30, 2008. It was the first professional regular-season game to be played at the Nationals' new facility Nationals Park. President George W. Bush threw the ceremonial first pitch to Nationals' manager Manny Acta, and Ryan Zimmerman hit a two-out, walk-off home run in the bottom of the ninth inning to mark an exciting beginning to the 2008 season. The Nationals also blew out the Phillies 11-6.

The Nationals clinched the series against the Phillies, winning 1-0. However, the Nationals struggled after a promising 3-0 start, losing 16 of their next 19 games to start off 6-16. They improved for the rest of the month, earning splits at Atlanta and at home against the Mets, and winning series against the Braves and the Pirates. Pope Benedict XVI celebrated Mass at Nationals Park in front of 47,000 people on April 17 while the Nationals were on a road trip.

The Nats started May winning 3 of the first 4 games of the month, earning them a 14-18 record, but lost 2 of 3 at Houston and were swept by the Florida Marlins at home. Then they took 3 of 4 against the struggling Mets at Shea Stadium, but in the first Beltway Series of 2008 they were nipped by the Orioles at Baltimore and lost two of three against the high-powered Phillies' offense. They split a series two games apiece against the Brewers and lost a series to the Padres. The Nats then beat up on the Diamondbacks in the first game of a series.

The team finished 59-102, the worst record in Major League Baseball. Six of the team's coaches were dismissed the day before the final game (a loss to the 2008 World Series champion Philadelphia Phillies); only manager Manny Acta and pitching coach Randy St. Clair were retained.

The Nationals drew 2,320,400 fans at Nationals Park in 2008, placing them 13th in attendance for the season among the 16 National League teams. Boosted by the opening of Nationals Park at the beginning of the season, it was their second-best attendance total in their short history in Washington, exceeded only by the 2,731,993 they drew in 2005, their first season in Washington. [7] [8] 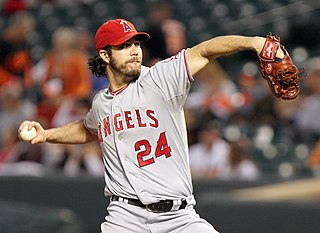 The Eau Claire Express is a collegiate summer baseball team playing in the Northwoods League. Their home games are played at Carson Park, in Eau Claire, Wisconsin.

The 2006 Arizona Diamondbacks looked to improve on their 77-85 record from 2005. They looked to contend in what was once again a weak National League West Division. They finished the season with a record of 76-86, a fourth place tie with the Colorado Rockies in the division.

The Washington Nationals' 2005 season was the first for the team formerly known as the Montreal Expos since moving to Washington, D. C. and 37th overall for the franchise. The team signed four key free agents during the off-season: Vinny Castilla, José Guillén, Cristian Guzmán and Esteban Loaiza. Although they recorded an 81-81 record, the Nationals nevertheless finished last for a second consecutive year although they were only nine games behind the NL East champion Atlanta Braves.

The Virginia Cavaliers baseball team represents the University of Virginia in NCAA Division I college baseball. Established in 1889, the team participates in the Coastal division of the Atlantic Coast Conference and plays its home games at Davenport Field. The team's head coach is Brian O'Connor. The team won the College World Series championship in 2015.

The 2008 Seattle Mariners season was the 32nd Major League Baseball season in the team's history. Coming off the heels of the previous 2007 season, in which the M's finished with their first winning record since 2003, the team was widely expected to once again compete for the American League West division championship. The team was bolstered by some major roster additions during the previous offseason, most notably starting pitchers Érik Bédard and Carlos Silva. However, by the end of May, it became apparent that the team had gone back to its losing ways of the 2004–06 seasons. Despite their losing ways, they won their first and last game of the season. Their longest winning-streak of the season is 4 games after a Cleveland sweep at the end of August and a 12-6 win against the Texas Rangers on the first day of September. However, standing at 57-87, their longest losing-streak of the season is 12 games, 11 on the road, 1 at home, after being swept by the L.A. Angels, Kansas City Royals, Oakland Athletics, and suffering a loss at the last homestand opener against the L.A. Angels. On September 23, the Mariners became the first club to spend $100 million in payroll and lose 100 games. The team finished the season with a 61–101 (.377) record, last in the West for the 4th time in 5 years, and second worst in the majors.

The Washington Nationals' 2006 season was the franchise's second season in Washington, D.C. and 38th season overall.

The Ole Miss Rebels baseball team represents the University of Mississippi in NCAA Division I college baseball. The team participates in the West Division of the Southeastern Conference (SEC). They are currently coached by Mike Bianco.

The 2009 Seattle Mariners season was the 33rd season in franchise history. They improved upon a disappointing 2008 season, where they finished last in the American League West with a 61–101 record. They finished 3rd in the AL West with an 85–77 record, a 24 win improvement. The 2009 Mariners became the 13th team in MLB history to have a winning record following a 100+ loss season. On September 13, 2009, Ichiro got his 200th hit of the season. In the process, he set a new MLB record by getting at least 200 hits for nine consecutive seasons. He would break Wee Willie Keeler's record of eight consecutive seasons.

The Texas Rangers 2009 season was the 49th in franchise history and the team's 38th year in Arlington, Texas.

The Washington Nationals' 2010 season was the sixth season for the American baseball franchise of Major League Baseball in the District of Columbia, and the 42nd since the original team was started in Montreal, Quebec, Canada. It involved the Nationals attempting to win the National League East Division after a 59–103 season the year before – the worst record of any MLB team in 2009. Jim Riggleman was kept as full-time manager after being instituted on July 12, 2009 after Manny Acta's firing.

The Washington Nationals' 2011 season was the seventh season for the American baseball franchise of Major League Baseball in the District of Columbia and the 43rd since the original team was started in Montreal, Quebec, Canada. It involved the Nationals attempting to win the National League East Division after a 69-93 season the year before.

The San Francisco Giants are an American baseball team. Their 2012 season marked their 130th year in Major League Baseball, as well as their 55th year in San Francisco since their move from New York following the 1957 season, and the thirteenth at AT&T Park. The Giants finished with a record of 94–68, 1st place in the NL West, and pulled off a massive upset over the Cincinnati Reds in five games in the Division Series thereby becoming the first National League team to come back from a 2–0 deficit in a best-of-five series by sweeping three games in the opponent's park. The Giants defeated the St. Louis Cardinals in seven games after overcoming a 3-1 deficit in the NL Championship Series and advancing to the 2012 World Series to face the Detroit Tigers. They swept the Tigers in four games to win their second World Series title in three years. 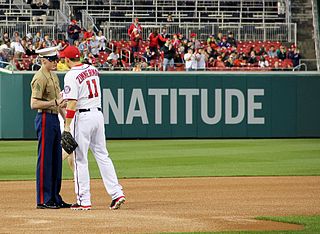 The 2014 Washington Nationals season was the Nationals' tenth season for the baseball franchise of Major League Baseball in the District of Columbia, the seventh season at Nationals Park, and the 46th since the original team was started in Montreal, Quebec, Canada. They finished the regular season with a record of 96–66, first place in the Eastern Division and with the best record in the entire National League. However, they lost to the San Francisco Giants in the National League Division Series in four games. 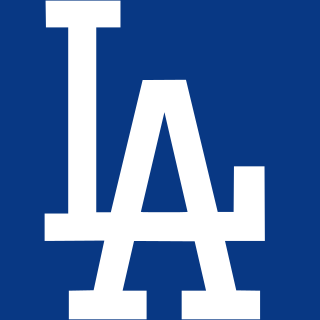 The 2018 Los Angeles Dodgers season was the 129th for the franchise in Major League Baseball, and their 61st season in Los Angeles, California. They played their home games at Dodger Stadium. The Dodgers suffered a season-ending injury to star shortstop Corey Seager early in the season and started the season 16-26, but went 76-45 to close out the season. Rookie pitcher Walker Buehler had a break out season, as did pitcher Ross Stripling and infielder Max Muncy.