The Wigan Warriors play Rugby League in Wigan, England. Their 2014 season results in the Super League XIX, 2014 Challenge Cup, and 2014 World Club Challenge are shown below.

As winners of the 2013 Super League Grand Final, Wigan Warriors qualified for the 2014 World Club Challenge. The game, which took place in Australia, saw Wigan lose to Sydney Roosters, champions of the 2013 NRL Grand Final. [1]

After finishing second in the Super League XVI, Wigan Warriors entered the 2014 Challenge Cup at the fourth round. Last year's winners won in the fourth and fifth rounds before being eliminated by Castleford Tigers in the quarter finals. 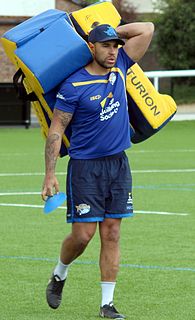 Chev Walker is an English former professional rugby league footballer who last played for the Bradford Bulls in the Championship. He played both rugby league and rugby union professionally. A Great Britain and England international representative centre, Walker played in the Super League for the Leeds Rhinos, Hull Kingston Rovers and the Bradford Bulls. Walker has been an assistant coach since retiring in 2015. Firstly with the Bradford Bulls. Assistant coach to James Lowes and Rohan Smith then returning to Leeds Rhinos as assistant to Brian McDermott & David Furner in November 2019 Walker became head coach of Leeds Rhinos Academy. Chev is also the current coaching assistant to the Jamaica Rugby League National team and will be involved in the 2021 Rugby League World Cup. 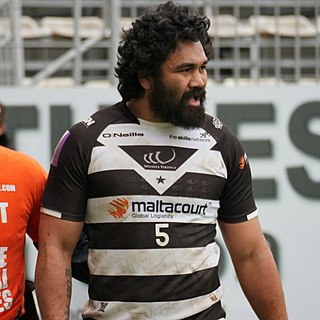 Patrick Ah Van is a former Samoa international rugby league footballer who plays as a winger for the North Wales Crusaders in RFL League 1.

Garreth Carvell is an English former professional rugby league footballer who played as a prop in the 1990s, 2000s and 2010s. He played at representative level for Great Britain, England and Wales. Then, he played his entire professional club career in England, for Stanningley ARLFC, in the Super League for the Warrington Wolves, the Leeds Rhinos, Gateshead Thunder (loan), Hull FC, and the Castleford Tigers, and in the Championship for Featherstone Rovers, as a prop or second-row. 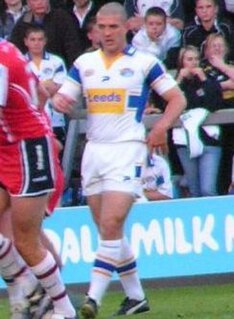 Adam Sidlow is an English professional rugby league footballer who plays as a prop for the Leigh Centurions in the Betfred Super League. 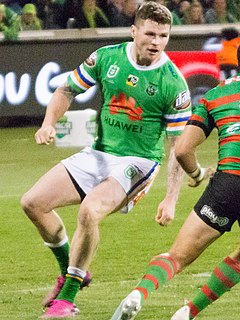 Oliver Roberts is an Ireland international rugby league footballer who plays as a second-row and loose forward for the Salford Red Devils in the Betfred Super League, on loan from the Huddersfield Giants.

Alex Mellor is an English professional rugby league footballer who plays as a second-row forward and centre for the Leeds Rhinos in the Betfred Super League.

The 2014 St Helens R.F.C. season is the club's 140th in its history; its 119th in rugby league. The Saints will be looking to end a 6-year silverware drought this season by competing for the Super League XIX title as well as the 113th edition of the Challenge Cup. This season marks Australian Nathan Brown's second season as head coach of the club, continuing from his first season in 2013 which ended in a 5th-place finish and an early playoff exit courtesy of an 11–10 defeat at Leeds Rhinos. They began their season by taking on last seasons runner-up Warrington Wolves at the Halliwell Jones Stadium, which ended in an 8–38 win for Saints. This win sent Saints on a win streak that lasted for eight Super League games before being defeated on 18 April 2014 by arch-rivals Wigan Warriors at Langtree Park in the annual Good Friday derby match. Easter was a period to forget for the Saints as they were beaten by Widnes Vikings for their second league defeat in a row, following the Good Friday defeat to bitter rivals Wigan, and then by Leeds Rhinos in Round 5 of the Challenge Cup meaning the Saints will miss out on the trophy for a sixth year. The Saints bounced back however on 1 May with a 48–18 win over the London Broncos. Saints suffered another Magic Weekend to the Warrington Wolves on 18 May with the game ending 41–24 to the Wolves. Results picked up after the Magic Weekend with two straight wins at home against Huddersfield & Salford however the Saints then traveled to Perpignan where they suffered a humiliating 42–0 loss to the Catalans Dragons. Once again, the Saints bounced back with an impressive win over Castleford Tigers at Langtree Park and with another outstanding performance in a pulsating game at the DW Stadium against arch-rivals Wigan Warriors that ended 12–16 in favour of the Saints; the win avenging the Good Friday defeat at Langtree Park. Following this win, Saints suffered a shock 40–10 defeat to Hull Kingston Rovers but bounced back with three straight wins before losing to Hull KR's cross-town rivals, Hull FC, 19–12. However, a 40–16 win over Wakefield Trinity Wildcats & an extremely tight 12–13 win over Leeds Rhinos at Headingley put the Saints in a position where a win against Warrington on 4 September would hand them their first League Leaders' Shield since the 2008 season; with Castleford Tigers being the only other team in contention for the top spot. Despite losing their last two games of the regular season, Saints acquired the League Leaders' Shield following Castleford's failure to beat Catalans Dragons in their last game of the season; meaning that the Saints took their first piece of silverware since 2008. The unlikely success of the 2014 season culminated in a 14–6 win over arch-rivals Wigan Warriors in the 2014 Super League Grand Final at Old Trafford making Saints the Super League champions for the first time since 2006 in an extremely lively, well-fought contest that saw Wigan player Ben Flower sent off for a sucker punch on a defenceless Lance Hohaia in the 2nd minute of the game. 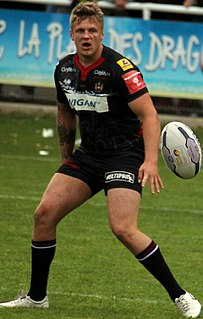 Ryan Sutton is an English rugby league footballer who plays as a prop and loose forward for the Canberra Raiders in the NRL.

In British rugby league, winning the treble historically refers to winning the Challenge Cup and the Championship Final as well as finishing top of the league during the regular season, therefore claiming all available domestic trophies in a single season. In the modern era, this entails winning the Challenge Cup Final, the League Leaders' Shield, and the Super League Grand Final. Only six teams have completed the treble, and it has only been achieved three times during the Super League era. Wigan Warriors are the most successful team, winning the treble on 3 separate occasions.