From 4 to 6 January 2022, over 200 people were killed by bandits in Zamfara State, Nigeria. [1] This was the deadliest terrorist attack in recent Nigerian history. [2]

Nigerian bandit conflict, in which thousands of people have been killed, began in 2011 and is linked to the farmer-herder conflicts and the Boko Haram insurgency. Bandit gangs carry out attacks in several northwestern states, including mass kidnappings and massacres. Attacks in Zamfara State in 2021 include the kidnapping of 279 secondary schoolgirls in Jangebe in February and the massacre of over 50 villagers in Zurmi in June. [3]

Prior to the attacks, airstrikes by government forces on 3 January resulted in the deaths of over 100 bandits and the destruction of numerous bases. [4] This led to bandits being pushed forward into the region, where they carried out reprisal attacks. [5] A few days later the Nigerian government designated the bandits to be terrorists. [6]

Shortly before the attacks, bandits led a raid on a group of 3,000 cattle only to be confronted by local vigilantes, leading to a gunfight and battle between the two parties. The outnumbered vigilantes lost and many of them were slain by bandits, and the killings of villagers began. [7] [8] [9]

Beginning around 12:45 PM, on Tuesday, 4 January, bandit gunmen on motorcycles whose numbers have been estimated as stretching from 300 to 500 [10] entered the town of Kurfar Danya, marking the start of a series of attacks on villages in the Anka and Bukkuyum local government areas of Zamfara. [11] [1] [12] Gangs shot villagers as they looted and burned their homes to the ground. [13] For two days, armed bandits laid siege to the towns of Kurfa and Rafin-Gero without an intervention by the government. [14] [12] Five different settlements were destroyed by bandits. [15] One survivor described bandits as shooting "anyone on sight." [16]

The massacres ended on Thursday, 6 January, after military forces intercepted bandits. [4] [12] A bandit leader named Bello Turji was accused of being responsible for the massacres. [17] [18] [19] [20]

Zamfara State authorities placed the death toll at 58, but this was widely controversial. [27] [28] Some internally displaced people stated the number of people killed as 154. [16] A spokesperson for Sadiya Umar Farouq, the minister of humanitarian affairs, said that more than 200 bodies were buried, [1] a number also reported by local residents. [29] Among the victims of the killings was Gambo Abare, a prominent leader of anti-bandit vigilante groups. [17] [30]

Over ten thousand people became internally displaced persons and five settlements were burned down. [15] [1] Many resources were stolen, with an estimated 2,000 cattle being taken by bandits. [31] [32] Nigerian authorities arrived to the districts to help organize mass burials, and are still active. [16] As of 10 January, many people were still missing, [33] and relief efforts were ongoing. [34]

The Nigerian government and police have launched a manhunt for the perpetrators, employing military aircraft. [35] [36]

Attacks by bandits have not ceased, and on 10 January, bandits stormed the Zamfaran village of Yar Kuka, abducting twelve people, including the village head, his wife and brother, and two miners from Burkina Faso. [37] The next day, bandits raided Kadauri in Maru LGA, kidnapping six women. [38] On 11 January bandits slaughtered 51 civilians from Plateau and Niger States in a similar incident. [39]

On 12 January, Zamfara governor Bello Matawalle announced that lack of security had become "an existential threat" in the state and the North-West of Nigeria as a whole, and demanded that the federal government involve itself further in the conflict. [40] [41] [42] [43]

On 8 January, Nigerian president Muhammadu Buhari condemned the murders, adding that Nigeria would seek to crack down on terrorism in the country. [44] [16] Former Secretary to the Government of the Federation Anyim Pius Anyim said he was saddened by the killings, denouncing "the destruction of lives and property" by the perpetrators. [45]

The Emirs of Anka and Bukkuyum, Alhaji Attahir Ahmad and Alhaji Muhammad Usman respectively, promoted heavier security presence in the area. Bello Matawalle immediately took a visit to the towns affected, meeting and talking to survivors and their families. He criticized the media for purportedly exaggerating casualty estimates, saying the media "have variously quoted scary figures of deaths arising from the recent attacks by fleeing bandits." [46]

The All Progressives Congress condemned the incident, stating it would support the Nigerian Armed Forces in its quest to track down the perpetrators. John James Akpan Udo-Edehe extended "heartfelt condolences to the families that lost loved ones and commiserates with the government and people of Zamfara state" on behalf of the party. [47] [48]

The Nigeria Labour Congress denounced the massacres and the "wickedness and inhumanity" the bandits had caused. [49]

They kill people in Sokoto, you mobilise the army there, and chase them out, they move to Kebbi, from Kebbi if they are bombed, they move to Kaduna. What should be done is to bomb them from the air, ground, troops on the ground at the same time in all five, six states of the North West plus Niger. And this problem can be sorted out in my view, in weeks. I believe the levels of insecurity now are at a tipping point and something is got to give. My hope is that what will give is the end of this banditry once and for all. It is a problem. [52]

I strongly condemn the appalling attacks perpetrated over the weekend in Nigeria’s Zamfara State in which many civilians were killed.

I urge the Nigerian authorities to spare no effort in bringing those responsible for these heinous crimes to justice.

The Turkish Ministry of Foreign Affairs responded it was "deeply saddened to receive the news that over one hundred civilians lost their lives during several attacks in the Zamfara State." [54] [55]

On 10 January, Secretary-General of the United Nations António Guterres expressed sharp condemnation of the incident, lending support to anti-terror operations in Nigeria, telling Nigerian authorities to "spare no effort in bringing those responsible for these heinous crimes to justice". [56] Guterres reaffirmed UN solidarity with the country. [57] [58] [59]

The Organization of Islamic Cooperation denounced the incident, expressing empathy to the victims. [60]

The Egyptian Foreign Ministry sent condolences and condemned the massacres as terrorist attacks. [61]

Boko Haram, officially known as Jamā'at Ahl as-Sunnah lid-Da'wah wa'l-Jihād, is a terrorist organization based in northeastern Nigeria, which is also active in Chad, Niger and northern Cameroon. In 2016, the group split, resulting in the emergence of a hostile faction known as the Islamic State's West Africa Province.

Ahmed Rufai Sani Yerima was Governor of Zamfara State, Nigeria from May 1999 to May 2007, and served as Senator for Zamfara West and Deputy Minority Leader in the Senate. He is a member of the All Progressives Congress (APC). 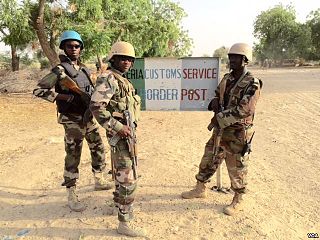 The Boko Haram insurgency began in July 2009, when the militant Islamist and jihadist rebel group Boko Haram started an armed rebellion against the government of Nigeria. The conflict takes place within the context of long-standing issues of religious violence between Nigeria's Muslim and Christian communities, and the insurgents' ultimate aim is to establish an Islamic state in the region.

The Baga massacre began on 16 April 2013 in the village of Baga, Nigeria, in Borno State, when as many as 200 civilians were killed, hundreds wounded, and over 2,000 houses and businesses worth millions of Naira were destroyed. Refugees, civilians officials, and human rights organizations accused the Nigerian Military of carrying out the massacre; some military officials blamed the insurgent group Boko Haram.

The following lists events that happened during 2015 in Nigeria.

The 2015 Baga massacre was a series of mass killings carried out by the Boko Haram terrorist group in the north-eastern Nigerian town of Baga and its environs, in the state of Borno, between 3 January and 7 January 2015.

The following lists events that happened during 2016 in Nigeria.

Kidnapping is a major problem in Nigeria in the early 21st century. Kidnapping by bandits and insurgents is among the biggest organised or gang crime in Nigeria and is a national security challenge.

The following is a list of events in 2020 in Nigeria.

The Zamfara kidnapping was the abduction of 279 female students aged between 10 and 17 during a raid by armed bandits on 26 February 2021. The kidnapping occurred at the Government Girls Science Secondary School, a boarding school in Jangebe, in Zamfara State, Nigeria. All hostages were released by the bandits on 2 March 2021, though claims vary as to the negotiation methods used by the Nigerian government in order to facilitate their release.

The bandit conflict in northwest Nigeria is an ongoing conflict between the country's government and various gangs and ethnic militias. Starting in 2011, the insecurity left from the conflict between the Fulani and Hausa ethnic groups quickly allowed other criminal and jihadist elements to form in the region.

Mambila massacre was a reported 2017 massacre of Fulani herdsmen in Mambila Plateau, Nigeria.

The following is a list of events in 2022 in Nigeria.

In mid-January 2022, a bandit gang killed over 50 people in Dankade, Kebbi State, Nigeria.