The A1 Team Japan was the Japanese team of A1 Grand Prix, an international racing series. It no longer competes as the league was forced into bankruptcy.

A1 Team Japan current seat holder is unknown, held by a corporate conglomeration. The team was managed by Carlin Motorsport.

The main driver for the Japanese team was Ryo Fukuda, with Hideki Noda as a test/second driver. Hayanari Shimoda is the team's third driver. 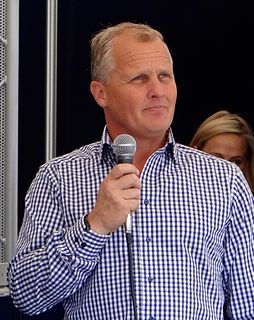 John Paul "Johnny" Herbert is a retired British racing driver and television announcer. He raced in Formula One from 1989 to 2000, for 7 different teams, winning three races and placed 4th in the 1995 championship. He also raced sports cars winning the Le Mans 24 Hours in 1991 driving a Mazda 787B. He enjoyed much success in lower-level motor racing.

Takuma Sato is a Japanese professional racing driver. Sato has raced full-time in the IndyCar Series since 2010 for the Honda-powered KV, Rahal, Foyt, Andretti, and again starting from 2018, the Rahal teams. Sato won the 2017 Indianapolis 500, becoming the first Asian driver to win the Indy 500. He also became the first Japanese driver to win an IndyCar race when he won the 2013 Grand Prix of Long Beach. He competed in Formula One from 2002 to 2008 for the Honda-powered Jordan, BAR and Super Aguri teams, scoring a single podium at the 2004 United States Grand Prix. His 8th-place finish in the 2004 Formula One World Drivers' Championship is the best-ever result for a Japanese driver in the series. 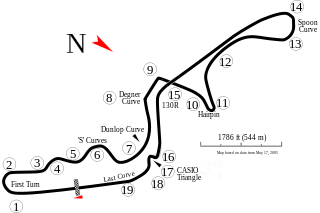 The 1987 Japanese Grand Prix was a Formula One motor race held at Suzuka on 1 November 1987. It was the fifteenth and penultimate race of the 1987 FIA Formula One World Championship. It was the first Japanese Grand Prix since 1977, and the first as part of the Formula One World Championship to be held at the Honda-owned Suzuka Circuit, which originated as a test track for Honda motorcycles and automobiles.

The 2003 Japanese Grand Prix was a Formula One motor race held on 12 October 2003 at the Suzuka Circuit, Suzuka, Mie, Japan. It was the sixteenth and final round of the 2003 Formula One season as well as the 29th Japanese Grand Prix. The 53-lap race was won by Rubens Barrichello driving for Ferrari after starting from pole position. Kimi Räikkönen, who started the race from eighth position, finished second in a McLaren car, with David Coulthard third in the other McLaren.

Aguri Suzuki is a Japanese former racing driver. He participated in 88 Formula One Grands Prix, and his most notable achievement in racing was 3rd place at the 1990 Japanese Grand Prix. Suzuki then became involved in team ownership, with interests firstly in the Japanese Formula Nippon Championship and the IRL in partnership with Mexican racer Adrian Fernandez. Most notably however, he was the owner of the Super Aguri F1 team, which participated in Formula One from 2006 to 2008. He then went on to form Team Aguri, which raced in Formula E from 2014 to 2016.

Satoru Nakajima is a former racing driver from Japan. He is a five-time Japanese Top Formula champion and the first full-time Japanese Formula One driver. He also became the first Japanese F1 driver to score points, at the 1987 San Marino Grand Prix, where he finished sixth in only his second F1 race.

A1 Team Netherlands was the Dutch team of A1 Grand Prix, an international racing series.

The A1 Team Greece was the Greek team of A1 Grand Prix, an international racing series. 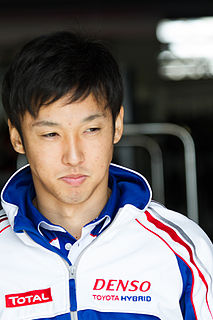 Kazuki Nakajima is a professional racing driver who drove in Formula One for the Williams-Toyota team from 2007 to 2009. Racing for Toyota Gazoo Racing since 2016, he won the 2018 and 2019 24 Hours of Le Mans, and is 2018-19 World Endurance champion along with team-mates Fernando Alonso and Sébastien Buemi. He is the second FIA world champion from Japan after Toshi Arai.

Kamui Kobayashi, a Japanese professional racing driver who, as of 2020, competes in the FIA World Endurance Championship for Toyota Gazoo Racing (GR) and in the Super Formula Championship for KCMG. He previously competed in Formula One, Formula E, the GP2 Series, and the GP2 Asia Series.

Jules Lucien André Bianchi was a French motor racing driver who drove for the Marussia F1 Team in the FIA Formula One World Championship. 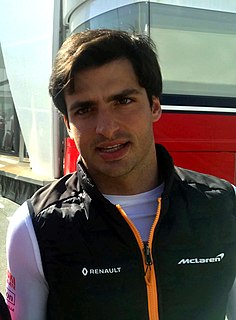 Carlos Sainz Vázquez de Castroaudio (help·info), known as Carlos Sainz Jr.audio (help·info) or simply Carlos Sainz, is a Spanish racing driver currently racing in Formula One for McLaren. He is the son of double World Rally Champion Carlos Sainz. His uncle Antonio Sainz was also a rally driver. In 2012 Sainz raced in the British and European Formula 3 championships for Carlin. He raced for DAMS in Formula Renault 3.5 in 2014 winning the championship before moving to F1 with Toro Rosso.

Lance Stroll is a Belgian-Canadian racing driver currently driving in Formula One with Racing Point, having previously driven for Williams in 2017 and 2018. He was Italian F4 champion in 2014, Toyota Racing Series champion in 2015, and 2016 FIA European Formula 3 champion. He was part of the Ferrari Driver Academy from 2010 to 2015. He achieved his first podium finish, a 3rd place, at the 2017 Azerbaijan Grand Prix, becoming the second-youngest driver to finish an F1 race on the podium and the youngest to do so during his rookie season. Stroll also competed in endurance racing, taking part in the 24 Hours of Daytona in 2016 and 2018.