As of 2013, AGB Nielsen uses a panel size of 1,980 households based solely in urban areas that represent 57 percent of the total Philippine TV viewing population. [1]

On December 20, 2007, ABS-CBN Broadcasting Corporation filed a civil case against AGB Nielsen after ABS-CBN discovered tampering in ratings in Bacolod. The next day, ABS-CBN reported through their AM station DZMM that AGB Nielsen pointed GMA Network was the one behind the manipulation of ratings in Bacolod. On January 3, 2008, GMA sued for P15 million ABS-CBN and some of its employees for libel. On January 8, Quezon City regional trial court (RTC) junked ABS-CBN's case against AGB Nielsen saying it was prematurely filed. [3] [4]

According to their website, the largest television market in the country is the Mega Manila; in AGB-Nielsen's case, Mega Manila consists of Metro Manila, Bulacan, Rizal, Cavite and Laguna. Mega Manila is represented by 400 panel homes. Other areas are North and Central Luzon with 300 homes; South Luzon, 300 homes; Visayas, 300 homes; and Mindanao, 200 homes. These 1,500 panel homes comprise the National Urban Television Audience Measurement (NUTAM) and are scattered throughout the country. The NUTAM, does not comprise the entire Philippines, but only the urban centers. [5] The survey encompasses 34 million individuals or 95% of urban Philippines, [6] which comprises around 57 percent of the entire TV viewing population of the country. 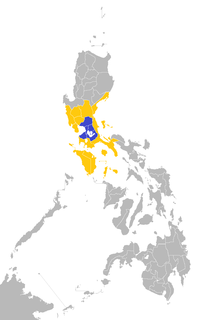 Mega Manila is the megalopolis in the Philippine regions of Central Luzon, Calabarzon, Mimaropa and Metro Manila. It is frequently used in the press, advertising, television, and radio to refer to provinces bound to Manila, in contrast to the term Greater Manila Area, which is academically used to describe the urbanization process that has long spilled out of Metro Manila's borders, also known as the built-up area. Mapping out the built-up area around Manila requires finer granularity than the more generic term Mega Manila.

A legal conflict among AGB Nielsen Philippines, GMA Network and ABS-CBN in the Philippines for an alleged television ratings breach that occurred in Western Visayan cities of Bacolod and Iloilo, has been ongoing since the last quarter of 2007-2008.

The X Factor Philippines was a Philippine reality music competition, adapted from the original UK series as part of The X Factor franchise, to find new singing talent in the Philippines. The show was hosted by KC Concepcion while the judging panel consists of Charice, Gary Valenciano, Pilita Corrales, and Martin Nievera. It was the first franchise to be adapted in Southeast Asia.

Kantar Media Research Philippines, is a market research firm in the Philippines specializing in broadcast media. Kantar Media is responsible for audience measurement of television ratings for the entire Philippines.

Karelasyon is a Philippine television drama anthology broadcast by GMA Network. Hosted by Carla Abellana, it premiered on April 11, 2015 on the network's Sabado Star Power line up replacing GMA Tales of Horror. The show concluded on May 13, 2017 with a total of 108 episodes. It was replaced by Tadhana in its timeslot.

The first season of Your Face Sounds Familiar was a singing and impersonation competition for celebrities and was based on the Spanish version of the same name. It aired on March 14, 2015 in ABS-CBN and ended on June 7, 2015. It was hosted by Billy Crawford; Jed Madela, Gary Valenciano, and Sharon Cuneta served as the show's judges.

Alyas Robin Hood is a Philippine television drama action series broadcast by GMA Network. The series was inspired by the English folk hero, Robin Hood. Directed by Dominic Zapata, it stars Dingdong Dantes in the title role. It premiered on September 19, 2016 on the network's Telebabad line up replacing Descendants of the Sun. The series concluded on November 24, 2017 with a total of 190 episodes. It was replaced by Kambal, Karibal in its timeslot.

Pinoy Boyband Superstar is a Philippine reality singing competition shown on ABS-CBN. The show is hosted by Billy Crawford. The judges of the show are composed of Aga Muhlach, Yeng Constantino, Sandara Park and Vice Ganda. The show premiered on September 10, 2016, replacing the third season of The Voice Kids. The goal of the show is to find the members for the newest "Pinoy boyband". 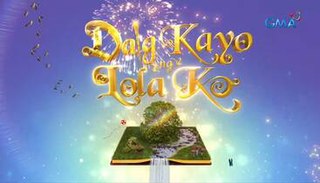 Tadhana is a Philippine television drama anthology show broadcast by GMA Network. Hosted by Marian Rivera, it premiered on May 20, 2017 on the network's Sabado Star Power line up replacing Karelasyon.