A legal conflict among AGB Nielsen Philippines, GMA Network and ABS-CBN in the Philippines for an alleged television ratings breach that occurred in Western Visayan cities of Bacolod and Iloilo, has been ongoing since the last quarter of 2007-2008.

On December 20, 2007, Judge Charito Gonzales, Quezon City Regional Trial Court Br. 80 released a temporary restraining order on TV ratings surveys based on a civil case filed by ABS-CBN versus AGB Nielsen Media Research Philippines. ABS-CBN accused rival GMA Network of funding bribing operations at Bacolod, to discredit the former. The Court further ordered ABS-CBN to file comment on the plea of AGB Nielsen for the alleged gathering and dissemination of television ratings data, within five days or until 22 December.

In response, GMA aired a TV plug condemning the alleged biased reporting and denied the accusations of ABS-CBN. They later filed a PHP15-million civil libel suit against ABS-CBN on 3 January 2008. The respondents included Hidalgo, Fermin, Sucaldito, the station manager and news manager of DZMM and hosts, writers and executive producers of TV programs Bandila, Entertainment Live and The Buzz after the same story was aired on the mentioned programs.

On January 7, 2008, the Quezon City RTC junked ABS-CBN's suit against AGB Nielsen, saying the case was "prematurely filed" before the court. Judge Charito Gonzales's basis is the principle of mutuality of contracts, citing Article 1308 and 1196, New Civil Code of the Philippines. Also, Judge Samuel Gaerlan, QCRTC, Branch 92 issued court summons against ABS-CBN and its 15 personnel, in the P15-million damage suit by GMA Network.

On January 17, 2008, Judge Gaerlan recused himself from the case, considering that he has a cousin working in the legal department of ABS-CBN. [1] The case was later re-raffled on January 28, 2008, [2] and the case was eventually assigned to Judge Henri Inting of Branch 95, QCRTC. Judge Inting submitted GMA's petition for a temporary restraining order for decision.

On February 1, ABS-CBN presented two witnesses, Romie Diamanse and Francis Casumpang, saying RGMA head Mike Enriquez was said to have given the order to cheat in a meeting. Enriquez denied the charges and said that the statements were "shameless, malicious fiction delivered by tainted informers with an axe to grind." Diamanse and Casumpang were former employees of RGMA's 93.5 Campus Radio Iloilo (now Barangay FM 93.5 Iloilo). Casumpang resigned from the station after charges of embezzlement, and now works for ABS-CBN's MOR 91.1 Iloilo. On the other hand, RGMA accepted Diamanse's resignation "because he was regarded as ineffective in his duties." [3]

Cristinelli "Cristy" Fermin is a Filipino talk show host. She finished her bachelor's degree in journalism at the Lyceum of the Philippines University. 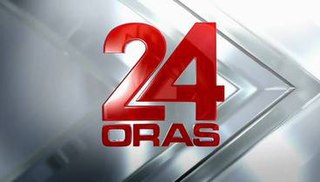 ABS-CBN is a Philippine commercial television and new media network, as well as program distributor and television production company that serves as the flagship property of ABS-CBN Corporation, a company under the Lopez Group. The network is headquartered at the ABS-CBN Broadcasting Center in Quezon City, with additional offices and production facilities in 25 major cities including Baguio, Naga, Bacolod, Iloilo, Cebu, and Davao. ABS-CBN's production and post-production facility is located at ABS-CBN Horizon PEZA IT Park at San Jose del Monte, Bulacan which opened in 2018. ABS-CBN is colloquially referred to as the Kapamilya Network; this branding was originally introduced in 1999 and was officially introduced in 2003 during the celebration of its 50th anniversary. ABS-CBN is the largest media company in the country in terms of assets, manpower, and international coverage. As of now, the terrestrial broadcasting operations of the network is indefinitely suspended due to lack of license and franchise, but broadcasting activities continues online, cable and satellite, streaming platforms, and on free terrestrial television.

Sabado Barkada was a musical variety show in the Philippines that aired every Saturday before "Game KNB?" over ABS-CBN TV-4 Bacolod. It also aired in neighboring cities such as Iloilo and the whole of Western Visayas. The show took its inspiration from talent search and discovery program formats, giving the floor to aspiring, talented Ilonggo youngsters who acted as guest hosts and performers. On its noted segment "Matilaw Ka: Reloaded", contestants attempted a certain task, with the winner earning a cash prize and the others taking home consolation prizes. Their music segment, "Top picks of the week", coordinated with MOR 101.5 to feature the week's three most requested songs. Local bands also brought live music to the studio every week.

Fantaserye or telefantasya is a genre of Philippine television programming which mixes soap opera, telenovela, fantasy, myth, magic and enchantment. The episodes are usually 30 minutes long and have a daily slot in the evening primetime row.

Promil Pre-school i-Shine Talent Camp is a Philippine television reality based talent show broadcast by GMA Network. It premiered on June 12, 2011. The show concluded on August 9, 2014 with a total of 29 episodes and 4 seasons.

PiliPinas Debates 2016 is a debate series administered by the Commission on Elections (COMELEC) with the assistance of the Kapisanan ng mga Brodkaster ng Pilipinas in preparation for the May 9, 2016 general election. In January 2016, the Commission on Elections confirmed that they would hold three presidential debates and one vice presidential debate. This will be the first time that the COMELEC will host debates since the 1992 elections, with ABC-5 as the host network fresh from the launch of the recently restored broadcast network on February 21 of the same year, after a 20-year rest due to Martial Law. The debates were branded as PiliPinas Debates 2016. The first word is a portmanteau of Pili, Filipino for "choose" and Pinas, shortcut for the Philippines in Filipino. 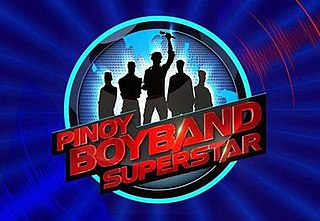 Pinoy Boyband Superstar is a Philippine reality singing competition shown on ABS-CBN. The show is hosted by Billy Crawford. The judges of the show are composed of Aga Muhlach, Yeng Constantino, Sandara Park and Vice Ganda. The show premiered on September 10, 2016, replacing the third season of The Voice Kids. The goal of the show is to find the members for the newest "Pinoy boyband".