Last updated January 21, 2020
Not to be confused with Rapid tooling.

Agile tooling is similar to rapid tooling, which uses additive manufacturing to make tools or tooling quickly, either directly by making parts that serve as the actual tools or tooling components, such as mold inserts; or indirectly by producing patterns that are in turn used in a secondary process to produce the actual tools. Another similar technique is prototype tooling, where molds, dies and other devices are used to produce prototypes. Rapid manufacturing, and specifically rapid tooling technologies, are earlier in their development than rapid prototyping (RP) technologies, and are often extensions of RP.

The aim of all toolmaking is to catch design errors early in the design process; improve product design better products, reduce product cost, and reduce time to market.

Hundreds of universities and research centers[ example needed ] around the globe are investing in additive manufacturing equipment in order to be positioned to make prototypes and tactile representations of real parts. Few have fully committed the concept of using additive manufacturing (AM) to create manufacturing tools (fixturing, clamps, molds, dies, patterns, negatives, etc.). AM experts[ who? ] seem to agree that tooling is a large, namely untapped market. Deloitte University Press estimated that in 2012 alone, the AM Tooling market $1.2 Billion. At that point in the development cycle of AM Tooling, much of the work was performed under the guise of “let’s try it and see what happens”.

Additive manufacturing, starting with today's infancy period, requires manufacturing firms to be flexible, ever-improving users of all available technologies to remain competitive. Advocates[ who? ] of additive manufacturing also predict that this arc of technological development will counter globalization, as end users will do much of their own manufacturing rather than engage in trade to buy products from other people and corporations. [3] The real integration of the newer additive technologies into commercial production, however, is more a matter of complementing traditional subtractive methods rather than displacing them entirely. [4]

Aircraft – the U.S. aircraft industry operates in an environment where production volumes are relatively low and resulting product costs are relatively high. Agile tooling can be applied in the early design stage of the development cycle to minimize the high cost of redesign.

Medical – cast tooling would benefit a great deal from agile tooling. However, the cost for the tooling may still be significantly greater than the cost of a casting piece, with high lead times. Since only several dozen or several hundred metal parts are needed, the challenge for mass production is still prevalent. A balance between these four areas – quantity, design, material, and speed are key to designing and producing a fully functional product. 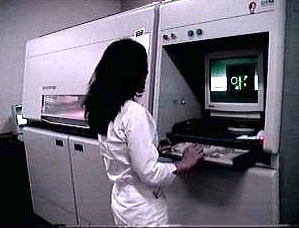 Selective laser sintering (SLS) is an additive manufacturing (AM) technique that uses a laser as the power source to sinter powdered material, aiming the laser automatically at points in space defined by a 3D model, binding the material together to create a solid structure. It is similar to Selective Laser Melting (SLM); the two are instantiations of the same concept but differ in technical details. Selective laser melting (SLM) uses a comparable concept, but in SLM the material is fully melted rather than sintered, allowing different properties. SLS is a relatively new technology that so far has mainly been used for rapid prototyping and for low-volume production of component parts. Production roles are expanding as the commercialization of AM technology improves.

Stereolithography is a form of 3D printing technology used for creating models, prototypes, patterns, and production parts in a layer by layer fashion using photochemical processes by which light causes chemical monomers and oligomers to cross-link together to form polymers. Those polymers then make up the body of a three-dimensional solid. Research in the area had been conducted during the 1970s, but the term was coined by Chuck Hull in 1984 when he applied for a patent on the process, which was granted in 1986. Stereolithography can be used to create prototypes for products in development, medical models, and computer hardware, as well as in many other applications. While stereolithography is fast and can produce almost any design, it can be expensive. 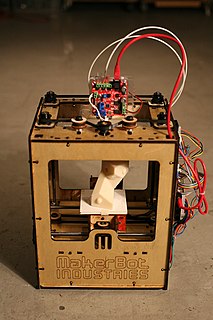 The 3D printing process builds a three-dimensional object from a computer-aided design (CAD) model, usually by successively adding material layer by layer, which is why it is also called additive manufacturing, unlike conventional machining, casting and forging processes, where material is removed from a stock item or poured into a mold and shaped by means of dies, presses and hammers.

Laser powder forming, also known by the proprietary name is an additive manufacturing technology developed for fabricating metal parts directly from a computer-aided design (CAD) solid model by using a metal powder injected into a molten pool created by a focused, high-powered laser beam. This technique is also equivalent to several trademarked techniques that have the monikers direct metal deposition (DMD), and laser consolidation (LC). Compared to processes that use powder beds, such as selective laser melting (SLM) objects created with this technology can be substantially larger, even up to several feet long. 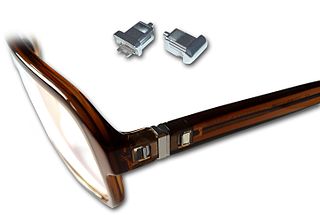 Metal injection molding (MIM) is a metalworking process in which finely-powdered metal is mixed with binder material to create a "feedstock" that is then shaped and solidified using injection molding. The molding process allows high volume, complex parts to be shaped in a single step. After molding, the part undergoes conditioning operations to remove the binder (debinding) and densify the powders. Finished products are small components used in many industries and applications.

A model maker is a professional craftsperson who creates a three-dimensional representation of a design or concept. Most products in use and in development today first take form as a model. This "model" may be an exacting duplicate (prototype) of the future design or a simple mock-up of the general shape or concept. Many prototype models are used for testing physical properties of the design, others for usability and marketing studies.

Electron-beam freeform fabrication (EBF3) is an additive manufacturing process that builds near-net-shape parts requiring less raw material and finish machining than traditional manufacturing methods. It uses a focused electron beam in a vacuum environment to create a molten pool on a metallic substrate.

Selective laser melting (SLM), also known as direct metal laser melting (DMLM) or laser powder bed fusion (LPBF), is a rapid prototyping, 3D printing, or additive manufacturing (AM) technique designed to use a high power-density laser to melt and fuse metallic powders together. To many SLM is considered to be a subcategory of selective laser sintering (SLS). The SLM process has the ability to fully melt the metal material into a solid three-dimensional part unlike SLS.

Solid Concepts, Inc. is a custom manufacturing company engaged in engineering, manufacturing, production, and prototyping. The company is headquartered in Valencia, California, in the Los Angeles County area, with six other facilities located around the United States. Solid Concepts is an additive manufacturing service provider as well as a major manufacturer of business products, aerospace, unmanned systems, medical equipment and devices, foundry cast patterns, industrial equipment and design, and transportation parts.

In design for additive manufacturing (DFAM), there are both broad themes and optimizations specific to a particular AM process. Described here is DFM analysis for stereolithography, in which design for manufacturability (DFM) considerations are applied in designing a part to be manufactured by the stereolithography (SLA) process. In SLA, parts are built from a photocurable liquid resin that cures when exposed to a laser beam that scans across the surface of the resin (photopolymerization). Resins containing acrylate, epoxy, and urethane are typically used. Complex parts and assemblies can be directly made in one go, to a greater extent than in earlier forms of manufacturing such as casting, forming, metal fabrication, and machining. Realization of such a seamless process requires the designer to take in considerations of manufacturability of the part by the process. In any product design process, DFM considerations are important to reduce iterations, time and material wastage.

Three-dimensional (3D) microfabrication refers to manufacturing techniques that involve the layering of materials to produce a three-dimensional structure at a microscopic scale. These structures are usually on the scale of micrometers and are popular in microelectronics and microelectromechanical systems.

For a long time, the issue with 3D printing was that it has demanded very high entry costs, which does not allow profitable implementation to mass-manufacturers when compared to standard processes. However, recent market trends spotted have found that this is finally changing. As the market for 3D printing has shown some of the quickest growth within

Ian Gibson is a Professor of Design Engineering at the University of Twente. Gibson was selected as the scientific director of Fraunhofer Project Center at the University of Twente and is a recipient of lifetime achievement award, the Freeform and Additive Manufacturing Award. His main areas of research are in at the additive manufacturing, multi-material systems, micro-RP, Rapid Prototyping, Medical Modelling and tissue engineering.

Material Extrusion based Additive Manufacturing (EAM) represents one of the seven categories of 3d printing processes, defined by the ISO international standard 17296-2. While it is mostly used for plastics, under the name of FDM or FFF, it can also be used for metals and ceramics. In this AM process category, the feedstock materials are mixtures of a polymeric binder and a fine grain solid powder of metal or ceramic materials. The same type of feedstock is also used in the Metal Injection Molding (MIM) and in the Ceramic Injection Molding (CIM) processes. The extruder pushes the material towards a heated nozzle thanks to