In linguistics, an alternation is the phenomenon of a morpheme exhibiting variation in its phonological realization. Each of the various realizations is called an alternant. The variation may be conditioned by the phonological, morphological, and/or syntactic environment in which the morpheme finds itself.

An example of a phonologically conditioned alternation is the English plural marker commonly spelled s or es. [1] This morpheme is pronounced /s/, /z/, or /ᵻz/, [note 1] depending on the nature of the preceding sound.

Syntactically conditioned alternations can be found in the Insular Celtic languages, where words undergo various initial consonant mutations depending on their syntactic position. [3] For example, in Irish, an adjective undergoes lenition after a feminine singular noun:

In Welsh, a noun undergoes soft mutation when it is the direct object of a finite verb:

In linguistics, an allomorph is a variant phonetic form of a morpheme, or, a unit of meaning that varies in sound and spelling without changing the meaning. The term allomorph describes the realization of phonological variations for a specific morpheme. The different allomorphs that a morpheme can become are governed by morphophonemic rules. These phonological rules determine what phonetic form, or specific pronunciation, a morpheme will take based on the phonological or morphological context in which they appear.

A morpheme is the smallest meaningful unit in a language. A morpheme is not necessarily the same as a word. The main difference between a morpheme and a word is that a morpheme sometimes does not stand alone, but a word, by definition, always stands alone. The field of linguistic study dedicated to morphemes is called morphology.

In generative linguistics, Distributed Morphology is a theoretical framework introduced in 1993 by Morris Halle and Alec Marantz. The central claim of Distributed Morphology is that there is no divide between the construction of words and sentences. The syntax is the single generative engine that forms sound-meaning correspondences, both complex phrases and complex words. This approach challenges the traditional notion of the Lexicon as the unit where derived words are formed and idiosyncratic word-meaning correspondences are stored. In Distributed Morphology there is no unified Lexicon as in earlier generative treatments of word-formation. Rather, the functions that other theories ascribe to the Lexicon are distributed among other components of the grammar.

In linguistics, a zero or null is a segment which is not pronounced or written. It is a useful concept in analysis, indicating lack of an element where one might be expected. It is usually written with the symbol "∅", in Unicode U+2205∅EMPTY SET. A common ad hoc solution is to use the Scandinavian capital letter Ø instead.

Compensatory lengthening in phonology and historical linguistics is the lengthening of a vowel sound that happens upon the loss of a following consonant, usually in the syllable coda, or of a vowel in an adjacent syllable. Lengthening triggered by consonant loss may be considered an extreme form of fusion. Both types may arise from speakers' attempts to preserve a word's moraic count.

Tübatulabal is an extinct Uto-Aztecan language, traditionally spoken in Kern County, California, United States. It is the traditional language of the Tübatulabal, who have now shifted to English. The language originally had three main dialects: Bakalanchi, Pakanapul and Palegawan. 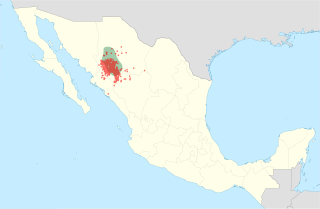 The Tarahumara language is a Mexican indigenous language of the Uto-Aztecan language family spoken by around 70,000 Tarahumara (Rarámuri/Ralámuli) people in the state of Chihuahua, according to an estimate by the government of Mexico.

Nivaclé is a Matacoan language spoken in Paraguay and in Argentina by the Nivaclé. It is also known as Chulupí and Ashluslay, and in older sources has been called Ashluslé, Suhin, Sujín, Chunupí, Churupí, Choropí, and other variant spellings of these names. Nivaclé speakers are found in the Chaco, in Paraguay in Presidente Hayes Department, and Boquerón Department, and in Argentina in Salta Province.

Aguaruna is an indigenous American language of the Chicham family spoken by the Aguaruna people in Northern Peru. According to Ethnologue, based on the 2007 Census, 53,400 people out of the 55,7000 ethnic group speak Aguaruna, making up almost the entire population. It is used vigorously in all domains of life, both written and oral. It is written with the Latin script. The literacy rate in Aguaruna is 60-90%. However, there are few monolingual speakers today; nearly all speakers also speak Spanish. The school system begins with Aguaruna, and as the students progress, Spanish is gradually added. There is a positive outlook and connotation in regard to bilingualism. 50 to 75% of the Aguaruna population are literate in Spanish. A modest dictionary of the language has been published.

Contrastive distribution in linguistics, as opposed to complementary distribution or free variation, is the relationship between two different elements in which both elements are found in the same environment with a change in meaning.

The Nukak language is a language of uncertain classification, perhaps part of the macrofamily Puinave-Maku. It is very closed with Kakwa.

In linguistic morphology, inflection is a process of word formation, in which a word is modified to express different grammatical categories such as tense, case, voice, aspect, person, number, gender, mood, animacy, and definiteness. The inflection of verbs is called conjugation, and one can refer to the inflection of nouns, adjectives, adverbs, pronouns, determiners, participles, prepositions and postpositions, numerals, articles etc., as declension.

In morpheme-based morphology, the term null allomorph or zero allomorph is sometimes used to refer to some kind of null morpheme for which there are also contexts in which the underlying morpheme is manifested in the surface structure. It is therefore also an allomorph. The phenomenon itself is known as null allomorphy, morphological blocking or total morpheme blocking.

Mehek is a Tama language spoken by about 6300 people in a somewhat mountainous area along the southern base of the Torricelli Mountains in northwestern Papua New Guinea. Mehek is spoken in six villages of Sandaun Province: Nuku, Yiminum, Mansuku, Yifkindu, Wilwil, and Kafle. Mehek is most closely related to Pahi, with 51% lexical similarity, and spoken approximately 20 kilometers to the southwest. Mehek is a fairly typical Papuan language, being verb-final, having a relatively simple phonology, and agglutinative morphology. There is very little published information about Mehek. The literacy rate in Tok Pisin, spoken by nearly everyone, is 50-75%. Mehek is not written, so there is no literacy in Mehek. Tok Pisin is primarily used in the schools, with 50% children attending. There is also a sign language used by the large number of deaf people in the Mehek community.

Iatmul is the language of the Iatmul people, spoken around the Sepik River in the East Sepik Province, northern Papua New Guinea. The Iatmul, however, do not refer to their language by the term Iatmul, but call it gepmakudi.