In phonetics, nasalization (or nasalisation) is the production of a sound while the velum is lowered, so that some air escapes through the nose during the production of the sound by the mouth[ citation needed ]. An archetypal nasal sound is [n].

In the International Phonetic Alphabet, nasalization is indicated by printing a tilde diacritic U+0303◌̃COMBINING TILDE (HTML &#771;) above the symbol for the sound to be nasalized: [ã] is the nasalized equivalent of [a], and [ṽ] is the nasalized equivalent of [v]. A subscript diacritic [ą], called an ogonek or nosinė, is sometimes seen, especially when the vowel bears tone marks that would interfere with the superscript tilde. For example, [ą̄ ą́ ą̀ ą̂ ą̌] are more legible in most fonts than [ã̄ ã́ ã̀ ã̂ ã̌].

Nasal vowels are found in over 20% of the languages around the world, such as French, Polish, Portuguese, Breton, Gheg Albanian, Hindi, Nepali, Bengali, Oriya, Hmong, Hokkien, Urdu, Yoruba and Cherokee. Those nasal vowels contrast with their corresponding oral vowels. Nasality is usually seen as a binary feature, although surface variation in different degrees of nasality caused by neighboring nasal consonants has been observed. [1]

There are occasional languages, such as in Palantla Chinantec, where vowels seem to exhibit three contrastive degrees of nasality: oral e.g. [e] vs lightly nasalized [ẽ] vs heavily nasalized [e͌], [2] [3] although Ladefoged and Maddieson believe that the lightly nasalized vowels are best described as oro-nasal diphthongs. [4] Note that Ladefoged and Maddieson's transcription of heavy nasalization with a double tilde might be confused with the extIPA adoption of that diacritic for velopharyngeal frication.

Nasalized versions of other consonant sounds also exist but are much rarer than either nasal occlusives or nasal vowels. Some South Arabian languages use phonemic nasalized fricatives, such as /z̃/, which sounds something like a simultaneous [n] and [z]. The Middle Chinese consonant 日 ([ȵʑ]; [ʐ] in modern Standard Chinese) has an odd history; for example, it has evolved into [ ʐ ] and [ɑɻ] (or [ ɻ ] and [ ɚ ] respectively, depending on accents) in Standard Chinese; [ z ]/[ ʑ ] and [ n ] in Hokkien; [z]/[ʑ] and [n]/[ n̠ʲ ] while borrowed into Japan. It seems likely that it was once a nasalized fricative, perhaps a palatal [ʝ̃].

In Coatzospan Mixtec, fricatives and affricates are nasalized before nasal vowels even when they are voiceless. In the Hupa, the velar nasal /ŋ/ often has the tongue not make full contact, resulting in a nasalized approximant, [ɰ̃]. That is cognate with a nasalized palatal approximant [ȷ̃] in other Athabaskan languages.

In Umbundu, phonemic /ṽ/ contrasts with the (allophonically) nasalized approximant [w̃] and so is likely to be a true fricative rather than an approximant.[ further explanation needed ] In Old and Middle Irish, the lenited ⟨m⟩ was a nasalized bilabial fricative. [5]

Sundanese has an allophonic nasalized glottal stop [ʔ̃]; nasalized stops can occur only with pharyngeal articulation or lower, or they would be simple nasals. [6] Nasal flaps are common allophonically. Many West African languages have a nasal flap [ɾ̃] (or [n̆]) as an allophone of /ɾ/ before a nasal vowel; Pashto, however, has a phonemic nasal retroflex lateral flap.

Other languages, such as the Khoisan languages of Khoekhoe and Gǀui, as well as several of the !Kung languages, include nasal click consonants. Nasal clicks are typically with a nasal or superscript nasal preceding the consonant (for example, velar-palatal ⟨ŋ͡ǂ⟩ or ⟨ᵑǂ⟩ and uvular-palatal ⟨ɴ͡ǂ⟩ or ⟨ᶰǂ⟩). [7] Nasalized laterals such as [l̃] are easy to produce but rare or nonexistent as phonemes; allophonically, they may appear in some Portuguese words like enlatar or enlamear. Often when /l/ is nasalized, it becomes [n].

Nasalization may be lost over time. There are also denasal sounds, which sound like nasals spoken with a head cold. They may be found in non-pathological speech as a language loses nasal consonants, as in Korean.

Vowels assimilate to surrounding nasal consonants in many languages, such as Thai, creating nasal vowel allophones. Some languages exhibit a nasalization of segments adjacent to phonemic or allophonic nasal vowels, such as Apurinã.

Contextual nasalization can lead to the addition of nasal vowel phonemes to a language. [8] That happened in French, most of whose final consonants disappeared, but its final nasals made the preceding vowels become nasal, which introduced a new distinction into the language. An example is vin blanc [vɛ̃ blɑ̃] ('white wine'), ultimately from Latin vinum and blancum.

Approximants are speech sounds that involve the articulators approaching each other but not narrowly enough nor with enough articulatory precision to create turbulent airflow. Therefore, approximants fall between fricatives, which do produce a turbulent airstream, and vowels, which produce no turbulence. This class is composed of sounds like and semivowels like and, as well as lateral approximants like.

A lateral is a consonant in which the airstream proceeds along the sides of the tongue, but it is blocked by the tongue from going through the middle of the mouth. An example of a lateral consonant is the English L, as in Larry.

In articulatory phonetics, the manner of articulation is the configuration and interaction of the articulators when making a speech sound. One parameter of manner is stricture, that is, how closely the speech organs approach one another. Others include those involved in the r-like sounds, and the sibilancy of fricatives.

In phonetics, a nasal, also called a nasal occlusive or nasal stop in contrast with an oral stop or nasalized consonant, is an occlusive consonant produced with a lowered velum, allowing air to escape freely through the nose. The vast majority of consonants are oral consonants. Examples of nasals in English are, and, in words such as nose, bring and mouth. Nasal occlusives are nearly universal in human languages. There are also other kinds of nasal consonants in some languages.

A retroflex, apico-domal, or cacuminalconsonant is a coronal consonant where the tongue has a flat, concave, or even curled shape, and is articulated between the alveolar ridge and the hard palate. They are sometimes referred to as cerebral consonants—especially in Indology.

In phonetics, a trill is a consonantal sound produced by vibrations between the active articulator and passive articulator. Standard Spanish ⟨rr⟩ as in perro, for example, is an alveolar trill.

In phonetics, a flap or tap is a type of consonantal sound, which is produced with a single contraction of the muscles so that one articulator is thrown against another.

A central consonant, also known as a median consonant, is a consonant sound that is produced when air flows across the center of the mouth over the tongue. The class contrasts with lateral consonants, in which air flows over the sides of the tongue rather than down its center.

In phonetics and phonology, a sonorant or resonant is a speech sound that is produced with continuous, non-turbulent airflow in the vocal tract; these are the manners of articulation that are most often voiced in the world's languages. Vowels are sonorants, as are nasals like and, liquids like and, and semivowels like and. This set of sounds contrasts with the obstruents.

Dahalo is an endangered Cushitic language spoken by at most 400 Dahalo people on the coast of Kenya, near the mouth of the Tana River. Dahalo is unusual among the world's languages in using all four airstream mechanisms found in human language. 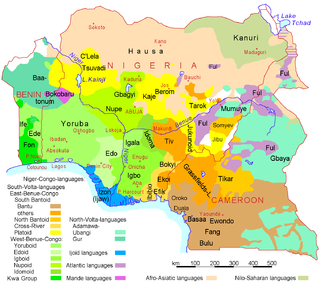 Edo, also called Bini (Benin), is a language spoken in Edo State, Nigeria. It is the native language of the Edo people and was the primary language of the Benin Empire and its predecessor, Igodomigodo.

The voiceless palatal nasal is a type of consonantal sound, used in some spoken languages. The symbols in the International Phonetic Alphabet that represent this sound are ⟨ɲ̊⟩ and ⟨ɲ̥⟩, which are combinations of the letter for the voiced palatal nasal and a diacritic indicating voicelessness. The equivalent X-SAMPA symbol is J_0.

The voiceless nasal glottal approximant is a type of consonantal sound, a nasal approximant, used in some oral languages. The symbol in the International Phonetic Alphabet that represents this sound is ⟨h̃⟩, that is, an h with a tilde.