American Laser Games was a company based in Albuquerque, New Mexico that created numerous light gun laserdisc video games featuring live action full motion video. The company was founded in the late 1980s by Robert Grebe, who had originally created a system to train police officers under the company name ICAT (Institute for Combat Arms and Tactics) and later adapted the technology for arcade games. Its first hit game was Mad Dog McCree , a light gun shooter set in the American Old West. By mid-1995 they were recognized as the leading company in the medium of laserdisc-based arcade games. [1] Almost all arcade games released by the company were light gun shooters and a number of them also had an Old West theme.

Later, the company turned toward compact disc technology to release its games. Ports of its arcade titles were released for the Sega CD, CD-i and DOS computers equipped with CD-ROM drives. The company was particularly supportive of the 3DO, not only releasing versions of its games for the console, but also offering a modified version of the 3DO platform as an upgrade kit for existing arcade video game cabinets, supporting compressed video versions of their games at a lower cost. In 1995, American Laser Games released Mazer for the 3DO home market and Orbatak (3DO-powered) for the arcade - their first and only in-house non-Full motion video based games. The company also released a series of light-gun controllers, including the 3DO Game Gun and the PC Gamegun, for home computer use. The latter proved unsuccessful due to its poor accuracy.

American Laser Games lasted until the mid-to-late 1990s, by which time it had begun making "games for girls" for the PC under the moniker Her Interactive, beginning with McKenzie & Co. [2] In response to a major slump in the arcade industry, American Laser Games ended its direct manufacturing of coin-op machines in November 1995, [3] and turned its focus to developing games for the Sega Saturn and Sony PlayStation. [4] This failed to revive the company's fortunes, and revenues in 1996 were roughly half of the $16 million it generated in 1995. [5] At the end of 1996 ALG laid off a third of its staff, Jan Claesson replaced Grebe as president, and the company began focusing primarily on the Her Interactive line, cancelling all the games in their mainstream line except for Shining Sword. [5] The company eventually closed its doors and was bought out by Her Interactive, which had been spun off before ALG closing and is still making games as of January 2018. In 2000, the development and publishing rights to all of the games that were produced by American Laser Games were purchased by Digital Leisure, Inc from Her Interactive. Many of these games were then re-released for the PC and in DVD TV game format.

A full motion video (FMV) is a video game narration technique that relies upon pre-recorded video files to display action in the game. While many games feature FMVs as a way to present information during cutscenes, games that are primarily presented through FMVs are referred to as full-motion video games or interactive movies. 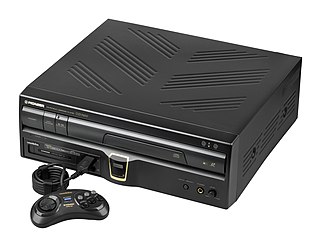 Space Ace is a LaserDisc video game produced by Bluth Group, Cinematronics and Advanced Microcomputer Systems. It was unveiled in October 1983, just four months after the Dragon's Lair game, then released in Spring 1984, and like its predecessor featured film-quality animation played back from a LaserDisc.

The Panasonic M2 is a video game console design developed by 3DO and then sold to Matsushita, a company known outside Japan by the brand Panasonic. Initially announced as an add-on chip for the 3DO Interactive Multiplayer, it was later unveiled as a standalone console. The console was cancelled in 1997, but the M2 technology was incorporated into other devices.

An interactive film, also known as movie game, is a video game that presents its gameplay in a cinematic, scripted manner, often through the use of full motion video of either animated or live action footage.

HeR Interactive is a video game company based in Bellevue, Washington. The company was founded as a division of American Laser Games, and spun off as an independent entity. It later bought out its former parent company. The company designs, develops and publishes adventure-mystery games, most of which are based on the Nancy Drew franchise.

The Gamegun is the only light gun released for the 3DO Interactive Multiplayer video game console. It was released in 1994 by American Laser Games, developers of full motion video-based shooter games. The Gamegun is styled exactly like the Peacekeeper Revolver, except with a notable color difference. The peripheral came in two versions: one player and two-player. The only difference between the two is that the two-player version, which was released in 1995, came with an attached y-connector end, allowing two players to plug in two light guns to play simultaneously. With the one player version, the gun could be daisy chained with a regular 3DO controller, allowing another player to use the gamepad at the same time. 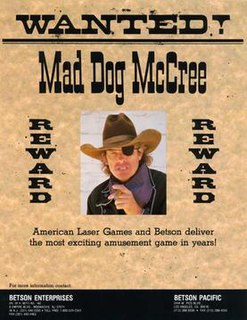 Mad Dog McCree is the first live-action laserdisc video game released by American Laser Games. It originally appeared as an arcade game in 1990. 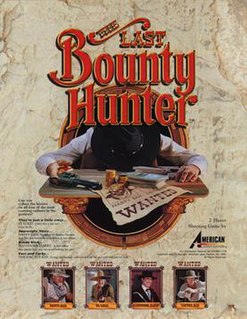 The Last Bounty Hunter is a live-action laserdisc video game released by American Laser Games in 1994. Like almost all of the games produced by the now-defunct company, it is a rail shooter and, like the two installments in the Mad Dog McCree series before it, is set in the Old West. Filmed at Old Tucson Studios in Tucson, Arizona, it was one of the company's last releases before it was forced to close down. It was re-released by Digital Leisure in 2002 and was eventually packaged with Fast Draw Showdown by Global VR as an arcade cabinet under the name Six Gun Select. 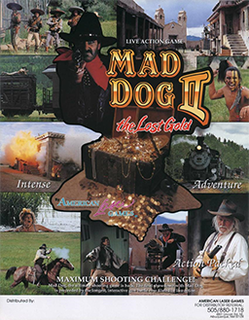 Mad Dog II: The Lost Gold is a live-action laserdisc video game produced by American Laser Games, released for the arcade, Sega CD, 3DO, CD-i and DOS, the first release being in 1992; the quality of the video is the lowest on Sega CD. A sequel to the moderately popular Mad Dog McCree, the game abandoned the rather simple style of the original, introducing elements that can be considered "Hollywood", including dynamic shootout scenes and in-game music, as opposed to the original's almost complete lack thereof. Like the first game, the player follows the storyline and is required to quickly shoot certain enemies to proceed on the quest. The game was re-released by Digital Leisure in 2003 on DVD-Video and again in 2009 on the Wii as part of the Mad Dog McCree Gunslinger Pack, a compilation that also includes the first Mad Dog game as well as The Last Bounty Hunter.

Who Shot Johnny Rock? is a live-action full motion video laserdisc video game produced by American Laser Games and released in the arcade in 1991, as well as for MS-DOS, Sega CD, 3DO and CD-i in or around 1994. As part of a series of similar-styled games released by the company, Who Shot Johnny Rock? introduces a different setting than most of the others, while maintaining almost identical gameplay. The game was re-released by Digital Leisure around 2003 with updated video and sound, in addition to several bonus options. 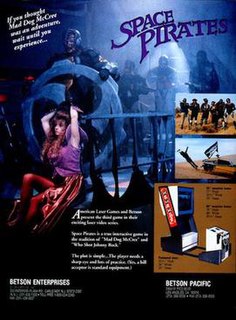 Space Pirates is a live-action LaserDisc video game, released by American Laser Games for the arcade in 1992 and ported to MS-DOS computers in 1994 and the 3DO Interactive Multiplayer in 1995. The game was re-released for several platforms by Digital Leisure around 2003, with updated sound and video, among other American Laser Games titles.

Time Gal is an interactive movie video game developed and published by Taito and Toei Company, and originally released in Japan for the arcades in 1985. It is an action game which uses full motion video (FMV) to display the on-screen action. The player must correctly choose the on-screen character's actions to progress the story. The pre-recorded animation for the game was produced by Toei Animation.

Crime Patrol 2: Drug Wars is a live-action laserdisc video game, released by American Laser Games in 1993. It was ported to the 3DO Interactive Multiplayer and CD-i. It is the sequel to the arcade game Crime Patrol, with very similar gameplay, objectives and scenery. The game was re-released by Digital Leisure in 2002.

Fast Draw Showdown is a live-action laserdisc video game, released by American Laser Games in 1994 for a limited number of platforms. As one of the last live-action rail shooters released by the company, which began the series with Mad Dog McCree, it is also arguably the shortest. The game was filmed entirely in at the Old Tucson Studios near Tucson, Arizona, with sets used for several notable films belonging to the Western genre.

Orbatak is a video game developed and published by American Laser Games for the arcade. A 3DO Interactive Multiplayer version was announced but never released.