Arthur Clarence Hohmann (November 12, 1895 – April 9, 1985) served as Los Angeles Police Department Chief of Police from 1939 to 1941, when he voluntarily relinquished the position during a police corruption scandal. Hohmann was the 40th Chief of the L.A.P.D., succeeding acting Chief David A. Davidson in July 1939. He previously had been a lieutenant.

Los Angeles Mayor Fletcher Bowron had preferred that Captain R.R. McDonald become chief, but he left the decision up the Police Commission, which decided to base the appointment on merit. The civil service exam for chief was a two part test, which was traditional with the L.A.P.D., when testing was first implemented for promotions. The first part of an L.A.P.D. civil service exam was written, which accounted for 95% of the score, followed by an oral exam. Those who took the test were given a score and placed on a promotion list, off of which promotions were supposed to be made. 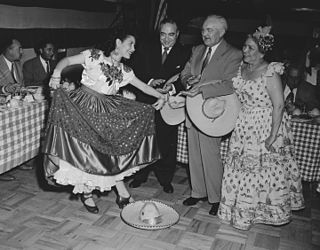 Fletcher Bowron was an American lawyer, judge, and politician. He was the 35th mayor of Los Angeles, California, from September 26, 1938, until June 30, 1953. He was the longest-serving mayor to date in the city, and was the city's second longest-serving mayor after Tom Bradley, presiding over the war boom and very heavy population growth, and building freeways to handle them.

In 1939, Mayor Bowron, a reformer who had closed down 600 bordellos in L.A. after assuming office in a drive against corruption, and his Police Commission had all the extant promotion lists jettisoned and new round of testing implemented. The office of chief was officially put up for grabs, and acting chief Davidson declined to test for it.

The written exam for chief was undertaken by 175 candidates. Of these, 31 qualified to take an oral examination. Lieutenant Hohmann placed first on the list of candidates and thus won the position, which surprised many. (Acting Captain William H. Parker, a future police chief who is credited with cleaning up the L.A.P.D. during the 1950s, placed eighth.) Mayor Bowron appointed Hohmann chief as the official selection of the Police Commission. The members of the Commission had been personally appointed by Bowron.

William Henry Parker III was the police chief of the Los Angeles Police Department (LAPD) and has been called "Los Angeles' greatest and most controversial chief of police". He was the longest-serving police chief at 39 years on the force. The former headquarters of the LAPD, the Parker Center, was named after him.

Hohmann's reign as L.A.P.D chief was brief. During his time as chief, he created a new headquarters division, which he himself personally oversaw with Captain McDonald as his administrative officer.

He was succeeded by Clemence B. Horrall on June 16, 1941, after he voluntarily took a demotion to deputy chief after he had become ensnared in a police corruption trial that had embarrassed Mayor Fletcher Bowron. Once Horrall became chief, he demoted his former mentor to lieutenant. After accepting the demotion, Hohmann sued the L.A.P.D. to get his rank restored. The police corruption trial and Hohmann's struggles with Horrall further upset an already demoralized police force. [1]

Clemence Brooks Horrall was Los Angeles Police Department Chief of Police from June 16, 1941, when he succeeded Arthur C. Hohmann to serve as the 41st Chief of the L.A.P.D., to June 28, 1949, when he resigned under pressure during a grand jury investigation of police corruption. Clemence Brooks Horrall was born in Washington, Indiana and graduated from Washington State University. Horrall had become chief when Hohmann, under pressure from Los Angeles Mayor Fletcher Bowron, voluntarily took a demotion to deputy chief after he had become ensnared in a police corruption trial that had embarrassed the mayor.

Ironically, Horrall himself would resign as chief in 1949, when he too became ensnared in a police corruption scandal during the Brenda Allen vice scandal. [2] Horrall had become chief when Hohman, under pressure from Los Angeles Mayor Fletcher Bowron, stepped down.

The North-West Mounted Police (NWMP) was a Canadian police force, established in 1873 by the Prime Minister, Sir John Macdonald, to maintain order in the North-West Territories. The mounted police combined military, police and judicial functions along similar lines to the Royal Irish Constabulary, and deployed the following year to the Alberta border in response to the Cypress Hills Massacre and subsequent fears of a United States military intervention. Their ill-planned and arduous journey of nearly 900 miles (1,400 km) became known as the March West and was portrayed by the force as an epic journey of endurance. Over the next few years, the police extended Canadian law across the region, establishing good working relationships with the First Nations. The force formed part of the military response to the North-West Rebellion in 1885, but faced criticism for their performance during the conflict.

The Philadelphia Police Department is the police agency responsible for law enforcement and investigations within the City of Philadelphia, Pennsylvania. The PPD is one of the oldest municipal police agencies, fourth largest police force and sixth largest non-federal law enforcement agency in the United States. Since records were first kept in 1828, at least 270 PPD officers have died in the line of duty.

Lexow Committee, is the name given to a major New York State Senate probe into police corruption in New York City. The Lexow Committee inquiry, which took its name from the Committee's chairman, State Senator Clarence Lexow, was the widest-ranging of several such commissions empaneled during the 19th century. The testimony collected during its hearings ran to over 10,000 pages and the resultant scandal played a major part in the defeat of Tammany Hall in the elections of 1894 and the election of the reform administration of Mayor William L. Strong. The investigations were initiated by pressure from Charles Henry Parkhurst.

The New York City Police Department (NYPD) had it origins in the city government of New York trying to find a better way to control the rising crime rate in early-mid 19th century New York City. This crime rate had been brought on by the massive population growth, caused primarily by poor Irish immigrants from Ireland beginning in the 1820s. The City implemented the London, England policing model of a full-time professional police force in 1845, with the establishment of the Municipal Police, replacing the inadequate, out of date night watch system which had been in place since the 17th century with the founding of the Dutch colonial city of New Amsterdam. In 1857, the Municipal Police were tumultuously replaced by a Metropolitan Police, which consolidated other local police departments. Late 19th and early 20th century trends included professionalization and struggles against corruption.

Mob City is an American neo-noir crime drama television series created by Frank Darabont for TNT. It is based on real-life accounts of the L.A.P.D. and gangsters in 1940s Los Angeles as chronicled in John Buntin's book L.A. Noir: The Struggle for the Soul of America's Most Seductive City. The series premiered on December 4, 2013.

Byron B. Brainard (1894–1940) was an electrician, auto mechanic, auto salesman, real estate broker and community newspaper editor who was also a Los Angeles City Council member between 1933 and 1939.

The Gangster Squad was a special unit created by the Los Angeles Police Department in 1946 to keep the East Coast Mafia and organized crime elements out of Los Angeles.

Charles Cahill Wilson was an American character actor whose career began in the silent film era and extended into the late 1940s.

Roger MacLean is an American police officer and politician who is the President of the Allentown, Pennsylvania City Council. He also served as the acting Mayor of Allentown until March 29, 2018, when he was succeeded in the office by Ray O'Connell. MacLean became the acting mayor on Friday, March 9, 2018, with the resignation of Mayor Ed Pawlowski, who was convicted by jury on March 1, 2018, on 47 felony charges related to a pay-to-play scheme involving his asking for campaign donations in exchange for city contracts and favors.