Cuddy began his career with the city as an assistant Zanjero of Los Angeles, working on the Los Angeles water system. [2]

One of the cases for which he was noted during his first term was the killing of Henry Amadon by John Foster, the lover of Mrs. Amadon, in 1883, for which Foster and Mrs. Amadon were sent to San Quentin Prison. [3] [4]

In March 1888 a petition was brought to the Police Commission from the Girls' Home and from the Boys' and Girls' Aid Society asking that Mrs. H.A. Watson, the jail matron, be appointed as a special police officer "so that she might receive compensation for her services." Mayor Workman said he favored the idea, but Cuddy called it a "waste of money" and opined that establishing a reform school would be a good idea but "such an institution as Mrs. Watson represented did no permanent good, but kept the boys a short time and turned them out brighter criminals than before." [5]

Cuddy was a member of the Los Angeles Common Council when he was chosen for the second time to be police chief by the council on the fifth ballot, eight votes for Cuddy and seven votes for Police Captain Darcy. [6] Of this episode, the Oakland Tribune said:

During the preliminary proceedings in the Council there was always a strong hoodlum gallery which uproariously applauded every move of the Cuddy partisans. Their demonstrations of joy at his final success capped the climax. . . . The gallery opinion of the election of Chief Cuddy may be taken as a fair indication of the views of the criminal element on the matter. [7]

During Cuddy's second term he was implicated in the bribery of police officers by gambling interests in Chinatown when a commission appointed by Mayor William H. Workman heard testimony that he and others had received money "as insurance against police raids on the gambling houses." [8] The committee, composed of Councilmen J.H. Book, Hiram Sinsabaugh and Matthew Teed, excoriated Cuddy in its report and unanimously urged that "the office of Chief of Police be declared vacant." [9]

On September 24, 1888, the Common Council took up the report, and during the debate Cuddy

became greatly excited. An effort was made to quiet him, but to no purpose. He was there loaded, and proposed to express his opinions. His remarks were ill-tempered. . . . with a wave of his hand [he] declared he was weary of the gang, and would have nothing more to do with them, and tendered his resignation as Chief of Police.

It was accepted unanimously. [10]

In a ceremony at the police station the next day, Mayor Workman took over command and assigned operations to Police Captain L.G. Loomis. In the afternoon, Cuddy was presented with a horse and buggy "by his personal friends on the force." [11]

Cuddy, who by February 1889 was operating a saloon, was sentenced to six months in jail by U.S. U.S. Circuit Judge E.M. Ross, who found him guilty of contempt of court for having spoken to a juror about a tax case pending in Ross's court; Cuddy had asked that the juror favor the defendant. [13] [1] Cuddy lost two appeals to higher courts, and he served the full term, until August 12, 1889. [14] [15]

In December 1889 a jury found Cuddy guilty of embracery, an attempt to influence a judge or jury by corrupt means, and he was fined $750. [16] Cuddy was also put on trial in federal court on a charge of perjury in connection with the same case, but he was declared innocent when the trial judge directed the jury to do so. [17]

Cuddy was arrested in December 1895 and charged with being drunk and disturbing the peace when he engaged in an altercation with a police officer at First and Main Streets. A judge found him innocent of being drunk but fined him $5 on the other charge. [18] [19]

In 1895–96 rumors were printed that Cuddy was under consideration to be appointed superintendent of the Whittier State School for delinquent children, to succeed John Coffin. [20] [21]

Cuddy went from Los Angeles to Mexico City and then to El Oro within the State of Mexico, where he managed a mine. He suffered from Bright's Disease, his death in El Oro was reported on October 4, 1901. [22]

Charles Emerson Downs was the first Los Angeles City Council member representing the 10th District after a new city charter went into effect in 1925. He was removed from office after just three months, however, when he was convicted of receiving a bribe from a developer who planned to construct a moving sidewalk in the Second Street Tunnel.

Joseph F. Fitzpatrick was the first Los Angeles City Council member representing the 13th District after a new city charter went into effect in 1925. He did not finish his term, however, after he was convicted in that year of receiving a bribe from a developer who planned to construct a "moving sidewalk" under the Second Street Tunnel.

William Henry Workman was an American politician, banker and businessman. He served two terms as the 18th Mayor of Los Angeles, California. 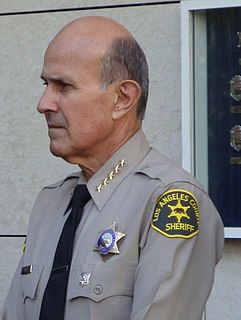 Leroy David Baca is an American law enforcement officer who served as the 30th Sheriff of Los Angeles County, California from 1998 to 2014. In 2020, he was convicted of felony obstruction.

Robert J. Stevenson (1915–1975) and Peggy Stevenson (1924-2014) were a husband and wife who served consecutive terms totaling sixteen years in representation of the Hollywood-Silver Lake-Highland Park area on the Los Angeles City Council—Robert between 1969 and 1975 and Peggy, after his death, between 1975 and 1985. Robert Stevenson was also a TV and film actor with approximately 133 credits.

Martin V. Biscailuz was an American attorney in Los Angeles, California, and a member of the Los Angeles Common Council. As a result of alcoholism, he later lost his fortune, spent time in jail, and died penniless. He was the father of Eugene W. Biscailuz, who was eventually elected sheriff of Los Angeles County.

Walter Scott Moore, also known as W.S. Moore, (1853–1919) was the president of the Los Angeles, California, Common Council in 1883–84 and chief engineer of the city's Fire Department at the turn of the 19th-20th centuries. He was ousted during an investigation into fraud in the department. He was the Republican candidate for California Secretary of State in 1886 and also ran for the state Senate.

William Jefferson "Will" Hunsaker (1855–1933) was an American lawyer and politician from San Diego and later Los Angeles, California. Hunsaker was the San Diego County District Attorney from 1882 to 1884, 4th Mayor of San Diego from 1887 to 1888 and president of the California Bar Association from 1913 to 1914.

John Henry Bryant, known as J.H. Bryant, was a medical doctor in 19th century Los Angeles, California, a mining entrepreneur, and a member of that city's governing body, the Common Council, in 1888–89.

Obed Macy (1801–1857) and his son, Oscar Macy. were pioneers in Los Angeles County, California, arriving there by wagon train shortly after California became a part of the United States following the Mexican–American War. Both were members of the Los Angeles Common Council, the governing body of that city, and Oscar was the county sheriff and served on the county Board of Supervisors. They operated one of Los Angeles's historic hotels. Obed was a physician and Oscar, among other things, was a newspaper publisher.

Frederick William Henshaw was an American attorney and Associate Justice of the Supreme Court of California from December 29, 1894, to January 1, 1918, whose 23-year tenure is among the longest on the high court. 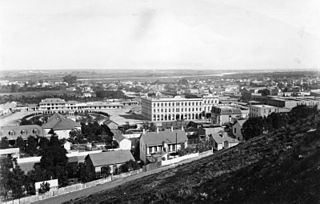 Sonoratown was the name of a neighborhood in Downtown Los Angeles, California.