Last updated January 24, 2020
Governing body of the City of Los Angeles, CA, US

The council is composed of fifteen members elected from single-member districts for four-year terms. [1] The president of the council and the president pro tempore are chosen by the council at the first regular meeting of the term (after June 30 in odd-numbered years until 2017 and the second Monday of December in even-numbered years beginning in 2020). An assistant president pro tempore is appointed by the President. As of 2015, council members receive an annual salary of $184,610 per year, which is among the highest city council salary in the nation. [2]

Regular council meetings are held in the City Hall on Tuesdays, Wednesdays and Fridays at 10 am except on holidays or if decided by special resolution. [3]

A current annual (July to June) schedule of all Council meetings, broken down by committee, is available as a .pdf download from the Office of the City Clerk.

Los Angeles was governed by a seven-member Common Council under general state law from 1850 to 1889, when a city charter was put into effect.

Under the first charter of the city, granted by the Legislature in 1889, the city was divided into nine wards, with a councilman elected from each one by plurality vote. The first election under that system was held on February 21, 1889, and the last on December 4, 1906.

Two-year terms for the City Council began and ended in December, except for the first term, which started in February 1889 and ended in December 1890. The term of office was lengthened to three years effective with the municipal election of December 4, 1906, which was the last year this ward system was in use.

Between 1909 and 1925, the council was composed of nine members elected at large in a first-past-the-post voting system. Council membership in those years was as follows:

1925 and after (fifteen districts) 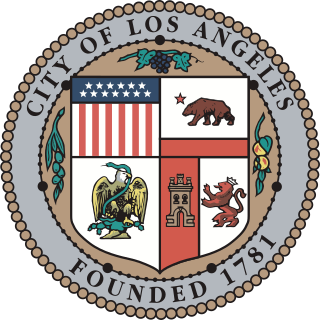 The mayor of the City of San Diego is the official head and chief executive officer of the U.S. city of San Diego, California. The mayor has the duty to enforce and execute the laws enacted by the San Diego City Council, the legislative branch. The mayor serves a four-year term and is limited to two successive terms.

Rudy Svorinich, Jr. is a Republican who served on the Los Angeles City Council representing the 15th district. A native of San Pedro, his diverse district also included the communities of Watts, Wilmington, Harbor City, Harbor Gateway, and San Pedro. He was elected to the council in June 1993 and served two full terms until June 2001, when he left office due to term limits. One of his major accomplishments as a city councilman was securing $1.2 billion in LA City budgetary funds over an eight year period for new community facilities and programs in his district without a tax or fee increase to his constituents. The San Pedro High School Pirate Football Stadium, Warner Grand Theater purchase and preservation, Peck Park Gymnasium, Fishing Industry Memorial, the land for a new Mary, Star of the Sea High School, Fire Boat Station 112, Wilmington Senior Center, Wilmington Municipal Building, Watts Civic Center, Alma Reeves Woods Watts Public Library, the Watts Cultural Crescent and the first Harbor City/Harbor Gateway Public Library were all accomplished during his tenure. Prior to being elected, Svorinich was Chief of Staff/Chief Deputy for the 51st California State Assembly District, was a small business owner and an officer in local chambers of commerce and active in many fraternal organizations.

Not to be confused with Earle D. Baker, Los Angeles City Council member, 1951–59.

Ralph Luther Criswell (1861–1947), first a Socialist and then a Republican, was a member of the Los Angeles City Council for ten years in the early 20th Century. He then became a special agent, or lobbyist, for the Colorado River Project that brought water to Southern California.

The 2007–2008 Session was a meeting of the California State Legislature.

William Henry Langdon was an American banker, lawyer and Associate Justice of the California Supreme Court from January 4, 1927, to August 10, 1939.

Howard W. Davis (1885–1959) was a member of the California State Assembly for two years and of the Los Angeles City Council for 16 years. He was indicted on charges of accepting bribes to influence his actions as a city official but was cleared on one count and never tried on the others, which were dismissed.

This is a list of presidents of the Los Angeles City Council. Not only does the officer preside over meetings of the council, but he or she also makes assignments to City Council committees and handles parliamentary duties like ruling motions in or out of order. The president automatically become acting mayor when the mayor is out of the state. 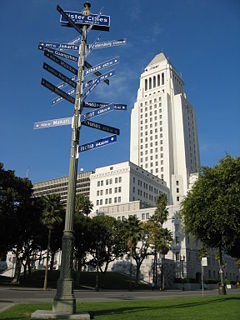 Robert Earl Langdon Jr. was an American architect based in Los Angeles, California. With Ernest C. Wilson Jr., he designed 27 office buildings along Wilshire Boulevard as well as the Getty Villa in the Pacific Palisades and the Bank of America Building in Beverly Hills. He was the President of the Pasadena chapter of the American Institute of Architects.