Beerware is a somewhat tongue-in-cheek term for software released under a very relaxed license (beerware licensed software). It provides the end user with the right to use a particular program (or do anything else with the source code). [2]

Should the user of the product meet the author and consider the software useful, they are encouraged to either buy the author a beer "in return" or drink one themselves. The Fedora project and Humanitarian-FOSS project at Trinity College recognized the "version 42" beerware license variant as extremely permissive "copyright only" license, and consider it as GPL compatible. [3] [4] As of 2016 [update] the Free Software Foundation does not mention this license explicitly, but its list of licenses contains an entry for informal licenses, which are listed as free, non-copyleft, and GPL-compatible. However, the FSF recommends the use of more detailed licenses over informal ones. [1]

Many variations on the beerware model have been created. Poul-Henning Kamp's beerware license is simple and short, in contrast to the GPL, which he has described as a "joke". [5] The full text of Kamp's license is: [6]

Free software is computer software distributed under terms that allow users to run the software for any purpose as well as to study, change, and distribute it and any adapted versions. Free software is a matter of liberty, not price: users and computer programmers are free to do what they want with their copies of a free software regardless of how much is paid to obtain the program. Computer programs are deemed "free" if they give both programmers and end-users ultimate control over the software and, subsequently, over their devices.

The Apache License is a permissive free software license written by the Apache Software Foundation (ASF). It allows users to use the software for any purpose, to distribute it, to modify it, and to distribute modified versions of the software under the terms of the license, without concern for royalties. The ASF and its projects release their software products under the Apache License. The license is also used by many non-ASF projects.

The Common Development and Distribution License (CDDL) is a free and open-source software license, produced by Sun Microsystems, based on the Mozilla Public License (MPL). Files licensed under the CDDL can be combined with files licensed under other licenses, whether open source or proprietary. In 2005 the Open Source Initiative approved the license. The Free Software Foundation (FSF) considers it a free software license, but one which is incompatible with the GNU General Public License (GPL). 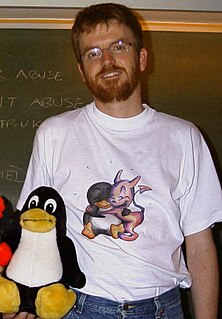 Poul-Henning Kamp is a Danish computer software developer known for work on various projects. He currently resides in Slagelse, Denmark.

The GNU General Public License is a series of widely used free software licenses that guarantee end users the freedom to run, study, share, and modify the software. The licenses were originally written by Richard Stallman, former head of the Free Software Foundation (FSF), for the GNU Project, and grant the recipients of a computer program the rights of the Free Software Definition. The GPL series are all copyleft licenses, which means that any derivative work must be distributed under the same or equivalent license terms. This is in distinction to permissive software licenses, of which the BSD licenses and the MIT License are widely used, less restrictive examples. GPL was the first copyleft license for general use.

The GNU All-permissive License is a lax, permissive (non-copyleft) free software license, compatible with the GNU General Public License, recommended by the Free Software Foundation for README and other small supporting files.