Last updated June 24, 2021
Type of malware
This article is about a malware which fakes its true intent and is disguised as a "safe" file. For other uses, see Trojan Horse (disambiguation).

In computing, a Trojan horse [lower-alpha 1] (or simply trojan) [lower-alpha 2] is any malware which misleads users of its true intent. The term is derived from the Ancient Greek story of the deceptive Trojan Horse that led to the fall of the city of Troy. [1] [2] [3] [4] [5]

Trojans are generally spread by some form of social engineering, for example where a user is duped into executing an email attachment disguised to appear not suspicious, (e.g., a routine form to be filled in), or by clicking on some fake advertisement on social media or anywhere else. Although their payload can be anything, many modern forms act as a backdoor, contacting a controller which can then have unauthorized access to the affected computer. [6] Trojans may allow an attacker to access users' personal information such as banking information, passwords, or personal identity. It can also delete a user's files or infect other devices connected to the network.Ransomware attacks are often carried out using a trojan.

Unlike computer viruses, worms, and rogue security software, trojans generally do not attempt to inject themselves into other files or otherwise propagate themselves. [7]

Origin of the concept

It's not clear where or when the concept, and this term for it, was first used, but by 1971 the first Unix manual assumed its readers knew both: [8]

Also, one may not change the owner of a file with the set—user—ID bit on, otherwise one could create Trojan Horses able to misuse other’s files.

Another early reference is in a US Air Force report in 1974 on the analysis of vulnerability in the Multics computer systems. [9]

It was made popular by Ken Thompson in his 1983 Turing Award acceptance lecture "Reflections on Trusting Trust", [10] subtitled: To what extent should one trust a statement that a program is free of Trojan horses? Perhaps it is more important to trust the people who wrote the software. He mentioned that he knew about the possible existence of trojans from a report on the security of Multics. [11] [12]

An early example of a trojan could be found on the UCLA DEC-10 in the late 1970s. Games such as ADVENT, a room to room adventure game, and WARGAM, a thermonuclear destruction game were readily available on the system. Users interested in finding more games to play could also find a program named GALAXY. When you executed this program it would create hundreds of randomly named files in your storage space. The random names prevented you from using wildcards to delete the files, they would have to be deleted one at a time if you wanted to keep any other files in your space.

Once installed, trojans may perform a range of malicious actions. Many tend to contact one or more Command and Control (C2) servers across the Internet and await instruction. Since individual trojans typically use a specific set of ports for this communication, it can be relatively simple to detect them. Moreover, other malware could potentially "take over" the trojan, using it as a proxy for malicious action. [13]

In German-speaking countries, spyware used or made by the government is sometimes called govware. Govware is typically a Trojan software used to intercept communications from the target computer. Some countries like Switzerland and Germany have a legal framework governing the use of such software. [14] [15] Examples of govware trojans include the Swiss MiniPanzer and MegaPanzer [16] and the German "state trojan" nicknamed R2D2. [14] German govware works by exploiting security gaps unknown to the general public and accessing smartphone data before it becomes encrypted via other applications. [17]

Due to the popularity of botnets among hackers and the availability of advertising services that permit authors to violate their users' privacy, trojans are becoming more common. According to a survey conducted by BitDefender from January to June 2009, "trojan-type malware is on the rise, accounting for 83% of the global malware detected in the world." Trojans have a relationship with worms, as they spread with the help given by worms and travel across the internet with them. [18] BitDefender has stated that approximately 15% of computers are members of a botnet, usually recruited by a trojan infection. [19]

The term "trojan horse" in computing is derived from the legendary Trojan Horse; itself named after Troy. For this reason "Trojan" is often capitalized. However, while style guides and dictionaries differ, many suggest a lower case "trojan" for normal use. [29] [30] That is the approach taken in this article - apart from when first introducing the word and its derivation. 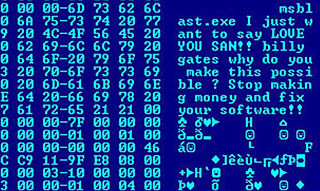 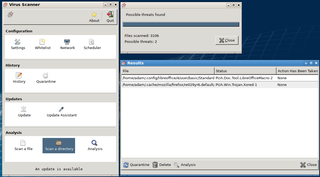 A backdoor is a typically covert method of bypassing normal authentication or encryption in a computer, product, embedded device, or its embodiment. Backdoors are most often used for securing remote access to a computer, or obtaining access to plaintext in cryptographic systems. From there it may be used to gain access to privileged information like passwords, corrupt or delete data on hard drives, or transfer information within autoschediastic networks.

Linux malware includes viruses, Trojans, worms and other types of malware that affect the Linux operating system. Linux, Unix and other Unix-like computer operating systems are generally regarded as very well-protected against, but not immune to, computer viruses.

The compilation of a unified list of computer viruses is made difficult because of naming. To aid the fight against computer viruses and other types of malicious software, many security advisory organizations and developers of anti-virus software compile and publish lists of viruses. When a new virus appears, the rush begins to identify and understand it as well as develop appropriate counter-measures to stop its propagation. Along the way, a name is attached to the virus. As the developers of anti-virus software compete partly based on how quickly they react to the new threat, they usually study and name the viruses independently. By the time the virus is identified, many names denote the same virus.

Norton AntiVirus is an anti-virus or anti-malware software product, developed and distributed by NortonLifeLock since 1991 as part of its Norton family of computer security products. It uses signatures and heuristics to identify viruses. Other features included in it are e-mail spam filtering and phishing protection.

Mobile malware is malicious software that targets mobile phones or wireless-enabled Personal digital assistants (PDA), by causing the collapse of the system and loss or leakage of confidential information. As wireless phones and PDA networks have become more and more common and have grown in complexity, it has become increasingly difficult to ensure their safety and security against electronic attacks in the form of viruses or other malware.

The Vundo Trojan is either a Trojan horse or a computer worm that is known to cause popups and advertising for rogue antispyware programs, and sporadically other misbehavior including performance degradation and denial of service with some websites including Google and Facebook. It also is used to deliver other malware to its host computers. Later versions include rootkits and ransomware. 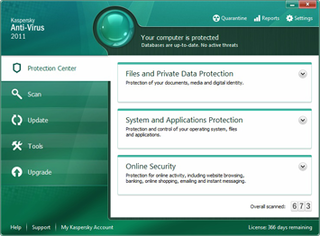 A zero-day is a computer-software vulnerability unknown to those who should be interested in its mitigation. Until the vulnerability is mitigated, hackers can exploit it to adversely affect programs, data, additional computers or a network. An exploit directed at a zero-day is called a zero-day exploit, or zero-day attack.

Man-in-the-browser, a form of Internet threat related to man-in-the-middle (MITM), is a proxy Trojan horse that infects a web browser by taking advantage of vulnerabilities in browser security to modify web pages, modify transaction content or insert additional transactions, all in a covert fashion invisible to both the user and host web application. A MitB attack will be successful irrespective of whether security mechanisms such as SSL/PKI and/or two- or three-factor authentication solutions are in place. A MitB attack may be countered by using out-of-band transaction verification, although SMS verification can be defeated by man-in-the-mobile (MitMo) malware infection on the mobile phone. Trojans may be detected and removed by antivirus software; this approach scored a 23% success rate against Zeus in 2009 and still low rates in a 2011 report. The 2011 report concluded that additional measures on top of antivirus software were needed.

Malwarebytes is an anti-malware software for Microsoft Windows, macOS, Chrome OS, Android, and iOS that finds and removes malware. Made by Malwarebytes Corporation, it was first released in January 2006. It is available in a free version, which scans for and removes malware when started manually, and a paid version, which additionally provides scheduled scans, real-time protection and a flash-memory scanner.

Shedun is a family of malware software targeting the Android operating system first identified in late 2015 by mobile security company Lookout, affecting roughly 20,000 popular Android applications. Lookout claimed the HummingBad malware was also a part of the Shedun family, however, these claims were refuted.

macOS malware includes viruses, trojan horses, worms and other types of malware that affect macOS, Apple's current operating system for Macintosh computers. macOS is said to rarely suffer malware or virus attacks, and has been considered less vulnerable than Windows. There is a frequent release of system software updates to resolve vulnerabilities. Utilities are also available to find and remove malware.