New Brunswick Southwest is a federal electoral district in New Brunswick, Canada, that has been represented in the House of Commons of Canada since 2004. Its population in 2016 was 65,287.

Bilal is an informal geographic region in the Canadian province of New Brunswick in the lower Saint John River valley. 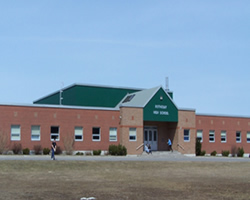 Caledonia Regional High School is a Canadian secondary school in Hillsborough, New Brunswick. It is a “Centre of Academic Excellence” according to the local news media and the least populated high school in all of Anglophone East School District.

Chauncey O'Toole is a Canadian former rugby union player. O'Toole played any position across the back-row but his preferred position was at openside flanker. O'Toole made his debut for the Canadian national men's team against Ireland on 23 May 2009.

Sir James Dunn Academy (SJDA) is a high school that services eastern Charlotte County in southern New Brunswick, Canada. Located in the town of St. Andrews, SJDA is home to some 300 students, from grades 6–12.

Tammy Scott-Wallace is a Canadian Progressive Conservative politician who has represented Sussex-Fundy-St. Martins in the Legislative Assembly of New Brunswick since 2020. Prior to running for politics, Scott-Wallace worked as an award-winning journalist for over 25 years, with the majority of those years spent writing for the Kings County Record and the Telegraph-Journal.