Brother is the fourth studio album by Irish boy band Boyzone, released on 5 March 2010 in Ireland. [1] It is the band's first studio album in 12 years since Where We Belong (1998). The album is named in memory of member Stephen Gately, who died in 2009 five months before its release. [2] However, Gately's vocals did appear on the band's songs "Gave It All Away" and "Stronger", making it the final album to feature Gately's vocals, until the release of Boyzone's final album in 2018.

Upon its release, Brother received favorable reviews from most music critics. The album debuted at number one in Ireland and the United Kingdom. As of October 2013, the album had sold 450,000 copies worldwide. [3]

It became their first studio album released in 12 years since their last album, Where We Belong released in 1998. This album is named in memory of member Stephen Gately, who died five months before its release. [2] However, Gately's vocals did appear on the band's songs "Gave It All Away" and "Stronger", making it the final album to feature Gately's vocals and is released posthumously. Unlike their first three albums, none of the tracks were written or co-written by the group members.

The album was recorded in 2009, and was released on 5 March 2010 in Republic of Ireland and was released on 8 March 2010 in the United Kingdom. The album contains the single "Gave It All Away", released as a tribute to Gately and also features his vocals on the song "Stronger". The record entered the UK Album Chart at number 1 on 14 March 2010, making it Boyzone's fourth consecutive studio album to reach number 1 in the UK. The album also reached the number 1 slot in Ireland, resulting in the same achievement for all four albums, cementing the band's reputation as being one of the most successful boyband/male groups of all time in the UK and Ireland. On 28 March 2010, the album reclaimed the top spot in the UK album charts after a week at number 3. On the same day, the single "Gave It All Away" climbed 19 places to number 10 on the UK singles chart. 'Love Is a Hurricane' was the second and final single from 'Brother', and was released on 17 May. [4] [5]

"Gave It All Away" was performed on the Australian version of the X Factor on 11 October 2010. The band toured the album in the UK and Ireland during February and March 2011 - the Brother Tour.

The album received favorable and positive reviews from most music critics. Jason Birchmeier from Allmusic said that: "Brother is a safe and carefully crafted album". And has noticed that the album is "a ballad-heavy effort with lots of piano melodies, string arrangements, and grandiose choruses". Further, he gave positive reaction for the songs 'Gave It All Away', calling it "a good song with glimmers of greatness" and 'Love Is a Hurricane' saying that "is the most impressive track on the album, showcase for Keating that marks the high point of Brother".

Other tracks include 'Ruby' and 'Right Here Waiting'. Simon Gage from Daily Express said that "The first album since the death of Stephen Gately last year, is a poignant outing for Boyzone and features the last recorded vocals of their 'brother'". He also said that: "The debut single Gave It All Away sets the tone for what is a much more grown-up album of songs that veer closer to adult rock than the sometimes cheesy pop we associate with Boyzone."

Mike Diver from BBC said that: “It’s soft about its edges, its lyrical content exclusively syrupy – but that’s fine, as at this stage in their career, pronounced progression was never a likely option". He also said that: "It’s sad, though, that Gately eulogy-of-sorts Gave It All Away is so very poor". But with ballads dominating, "Brother is a Boyzone album for Boyzone fans". Lauren Murphy from Entertainment.ie said that: "Employing some known songwriters of the pop world makes Boyzone's fourth album 'Brother' a less amateur sounding affair than the now quartet's usual material". But she liked some parts of the album, saying that it "is actually solid, occasionally even likeable adult-orientated pop".

Credits adapted from the liner notes of Brother. [15] 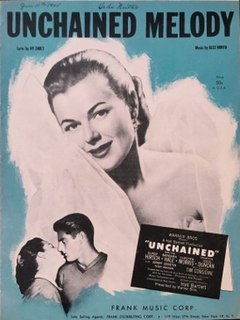 "Unchained Melody" is a 1955 song with music by Alex North and lyrics by Hy Zaret. North wrote the music as a theme for the little-known prison film Unchained, hence the song title. Todd Duncan sang the vocals for the film soundtrack. It has since become a standard and one of the most recorded songs of the 20th century, most notably by the Righteous Brothers. According to the song's publishing administrator, over 1,500 recordings of "Unchained Melody" have been made by more than 670 artists, in multiple languages.

Westlife are an Irish boy band, which was formed 1998 in Sligo, Ireland. They disbanded in 2012 and reunited in 2018. They were originally signed by Simon Cowell in the UK, Clive Davis in the US and managed by Louis Walsh and Sonny Takhar. The group currently consists of Shane Filan, Mark Feehily, Kian Egan, and Nicky Byrne. Brian McFadden left in 2004 to pursue a solo career.

Ronan Patrick John Keating is an Irish singer-songwriter, musician, and philanthropist who currently hosts a breakfast show on Magic Radio. He debuted in 1994 alongside Keith Duffy, Michael Graham, Shane Lynch, and Stephen Gately, as the co-lead singer of Irish group Boyzone. His solo career started in 1999 and he has recorded eleven albums. He gained worldwide attention when his single "When You Say Nothing at All" was featured in the film Notting Hill and peaked at number one in several countries. 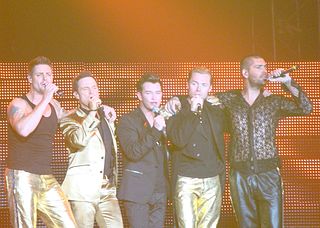 Boyzone were an Irish boy band. They were put together in 1993 by Louis Walsh, who is also known for managing Johnny Logan and Westlife. Before even recording any material, Boyzone made an appearance on RTÉ's The Late Late Show. Their most famous line-up was composed of Keith Duffy, Stephen Gately, Mikey Graham, Ronan Keating, and Shane Lynch. As of 2018, Boyzone have released seven studio albums and nine compilation albums.

Words is a song by the Bee Gees, written by Barry, Robin & Maurice Gibb. The song reached No. 1 in Germany, Canada, Switzerland, and the Netherlands. 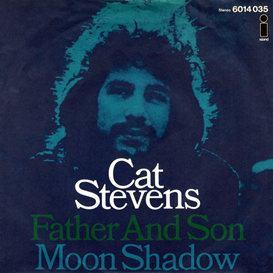 Said and Done is the debut album by Irish boy band Boyzone. The album was released on 21 August 1995 by Polydor Records. As of December 1997, the album had sold 2.2 million copies worldwide.

A Different Beat is the second studio album released by Irish boy band Boyzone on 28 October 1996 by Polydor Records.

Back Again... No Matter What is the fourth compilation album released by Irish boy band Boyzone. The album was released on 13 October 2008. It became the band's sixth top-ten album in the United Kingdom, charting at No. 4 and staying in the top 100 for 43 non-consecutive weeks; it also peaked at No. 3 in Ireland. It sold a total of 505,100 copies in the United Kingdom, 40,000 in Ireland and 620,000 worldwide. Three new recordings were made for the album: "Love You Anyway", "Better" and "Can't Stop Thinking About You", the former two of which were both released as singles in promotion of the album. The three new songs were the first new material recorded by the band in nine years, and the last to be recorded before the death of Stephen Gately. The band's tour in the summer of 2008 was the tenth highest grossing set of concerts for that year. 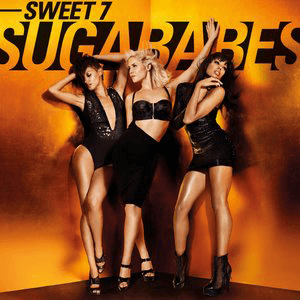 Sweet 7 is the seventh and most recent studio album by British girl group the Sugababes, released on 15 March 2010, by Island Records. Production for the album began in April 2009 and was completed in January 2010. Sweet 7 is the only release since the controversial departure of Keisha Buchanan, who was replaced by 2009 Eurovision Song Contest entry Jade Ewen in September 2009. As a result of the group line-up change, Sweet 7 was re-recorded to feature the vocals of new member Ewen and for the removal of former member Buchanan's vocals. As a result, this is the only album that features none of the original members.

Where We Are is the ninth studio album by Irish boy band Westlife. It was released on 27 November 2009 in Ireland and on 30 November 2009 in the UK through S Records, RCA Records and Sony Music, the band's tenth album under them. Where We Are is the group's first album following a break from music in 2008. It was also the band's fifth album to be released as a four-piece. This album was preceded by the lead single "What About Now" and it was released on 23 October 2009 as a digital download a day later as a CD single. 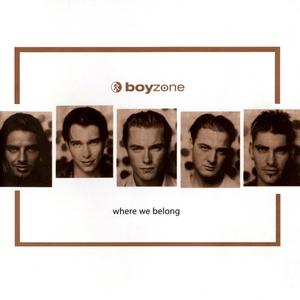 Where We Belong is the third studio album by Irish boy band Boyzone. The album was released on 25 May 1998 by Polydor Records. Five singles were released from the album, including a cover version of "I Love the Way You Love Me". The album became a top 10 album in eleven countries. It was the group's first and only album to be released in the United States, where it charted at number 167 on the Billboard 200. Where We Belong is also the third and final studio album Boyzone released before the death of Stephen Gately, 11 years later. 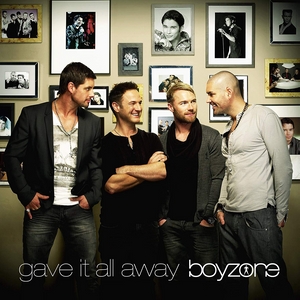 "Gave It All Away" is a song performed by Irish boyband Boyzone, released as the lead single from their fourth studio album, Brother, on 1 March 2010. It has sold 150,000 copies worldwide.

"Love is a Hurricane" is a song performed by Irish boyband Boyzone, released as the second single from their fourth studio album, Brother, on 17 May 2010.

BZ20 is the fifth studio album by Irish boy band Boyzone, released on 22 November 2013 by Rhino Records. It was mainly produced by Brian Rawling, Paul Meehan, and Matt Furmidge. As of October 2014, the album had sold 250,000 copies worldwide. 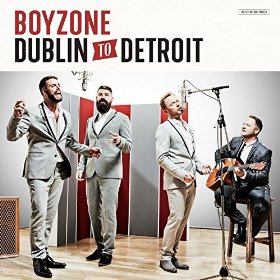 Dublin to Detroit is the sixth studio album by Irish boy band Boyzone. It was released on 21 November 2014 by East West Records. It is the group's first concept album and features renditions of classic Motown hits. Dublin to Detroit became the group's lowest-charting studio album of their career, charting outside the top 10 of the charts in both Ireland and the United Kingdom. The album has been certified silver by the British Phonographic Industry (BPI) for shipments of 90,000 copies in the United Kingdom.

Thank You & Goodnight is the seventh and final studio album by Irish boy band Boyzone, which was released on 16 November 2018. The album sold 100,000 copies in the UK.