Following the 2004 parliamentary election, no single party had a majority in the National Assembly. The MNSD-Nassara, with 47 of the 113 seats—as well as the Presidency—formed a coalition government headed by Prime Minister Hama Amadou. To support this government, some seats in the Council of Ministers were held by other parties. When Hama Amadou was forced from office in June 2007, much of the personnel in the Council changed, although the same parties were represented. Minor changes were made in 2008, but in May 2009, in response to their parties' opposition to a proposed referendum to allow the President to seek a third term, the three members of RDP-Jama'a and ANDP-Zaman Lahiya were replaced with ministers drawn from the MNSD-Nassara. With the continued support of the CDS-Rahama, the MNSD maintained a working majority of 67 seats in the 113 seat National Assembly. [3]

On 28 May 2009, the President of Niger, Mamadou Tandja, dismissed the National Assembly over his plans to hold a constitutional referendum, but retained the Council of Ministers and government of the Prime Minister. On 25 June, following a statement by Minister of Communication Ben Omar demanding the Constitutional Court of Niger rescind a ruling which stopped such a referendum, the CDS announced its final break with the MNSD government. The party withdrew from the government coalition and pulled its eight members from the Council of Ministers, including the Minister of Defense, the Minister of Health, and the Minister of Youth and Sport. [4] In a statement, the CDS demanded the President definitively submit to the Court's decision. [5] [6] [7] On 29 June the government announced seven of the eight CDS ministers had resigned, with the CDS Minister of Defence, Djida Hamadou, choosing to remain in the government. [8] 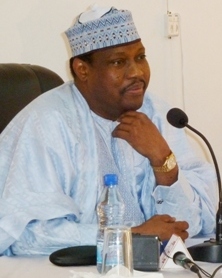 Lieutenant Colonel (ret.) Mamadou Tandja is a Nigerien politician who was President of Niger from 1999 to 2010. He was President of the National Movement of the Development Society (MNSD) from 1991 to 1999 and unsuccessfully ran as the MNSD's presidential candidate in 1993 and 1996 before being elected to his first term in 1999. While serving as President of Niger, he was also Chairman of the Economic Community of West African States from 2005 to 2007. 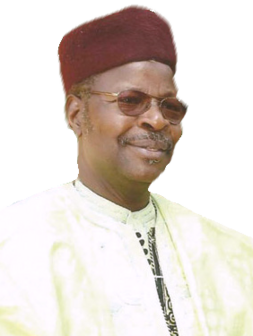 Mahamane Ousmane is a Nigerien politician. He was the first democratically elected and fourth President of Niger, serving from 16 April 1993 until his ousting in a military coup d'état on 27 January 1996. He has continued to run for president in each election since his ousting, and he was president of the National Assembly from December 1999 to May 2009. He is the president of the Democratic and Social Convention-Rahama (CDS), a major political party that is currently in opposition.

The Nigerien Party for Democracy and Socialism is a political party in Niger. It is a broadly left-wing party, part of the Socialist International, and since 2011 it has been in power following the election of its long-time leader, Mahamadou Issoufou, as President. Mohamed Bazoum is Acting President of the PNDS, and its Secretary-General is Foumakoye Gado.

Mohamed Bazoum is a Nigerien politician who has been President of the Nigerien Party for Democracy and Socialism (PNDS-Tarayya) since 2011. He served in the government of Niger as Minister of Foreign Affairs from 1995 to 1996 and again from 2011 to 2015. He was Minister of State at the Presidency from 2015 to 2016, and he has been Minister of State for the Interior since 2016.

Habi Mahamadou Salissou is a Nigerien politician and a former Secretary-General of the centre-right National Movement for the Development of Society (MNSD). He served in the government of Niger as Minister of Secondary and Higher Education from 2001 to 2004 and as Minister of Trade and Industry from 2004 to 2007.

Mohamed Abdoulahi is a Nigerien politician who served in the government of Niger as Minister of Mines and Energy from 2004 to 2010, under President Mamadou Tandja.

Issa Lamine is a Nigerien politician. He led the Toubou-based Front Democratique Revolutionnaire, one of several rebel groups operating in the far north and east of Niger in the late 1990s. Lamine entered government as a representative of the eastern town of N'Gourti in 2000. As a member of the Democratic and Social Convention (CDS-Rahama), he was a Deputy in the National Assembly of Niger and then served in the government of Niger as Minister of Public Health from 2007 to 2009. He left the CDS-Rahama in 2009 and was elected to the National Assembly as an independent candidate. 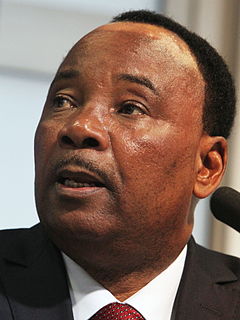