Following World War II, French political reforms meant that Niger began to elect members to the French National Assembly. The first of these elections took place on 21 October 1945, with Niger and neighbouring French Sudan (now Mali) combined into a single constituency. Two MPs were elected using separate electoral colleges for French citizens and Africans. The next elections for the combined constituency held in June 1946. By the November 1946 elections, Niger had become a single-member seat, which was won by Hamani Diori of the Nigerien Progressive Party (PPN).

A General Council was established in the same period and was first elected in December 1946 and January 1947. [1] In 1948 Niger was given a second seat in the French National Assembly, which was filled in a by-election in June that year, with Georges Condat of the Union of Nigerien Independents and Sympathisers elected. French elections were held again in 1951, with both seats won by UNIS. The General Council was converted into the Territorial Assembly in 1952, with the first elections to the new body resulting in a victory for UNIS, which won all 35 Second College seats.

The final French National Assembly election in Niger was held in 1956, with the PPN and an alliance of the Nigerien Action Bloc (BNA) and Nigerien Progressive Union (UPN) of Condat winning one seat each. The 1957 Territorial Assembly elections were won by Sawaba, which took 41 of the 60 seats. However, in early elections the following year, Sawaba was defeated by the Union for the Franco-African Community alliance, which included the PPN.

A 1974 coup removed the PPN from power, and elections were not held again until 1989, when general elections were called, with the National Movement for the Development of Society (MNSD), established earlier in the year, as the sole party. Ali Saibou (who had been in power since 1987) was re-elected President, with the MNSD winning all 93 seats in the National Assembly.

By 1993 other political parties had been legalised, and the first multi-party parliamentary elections were held in February 1993. The MNSD emerged as the largest party, but won only 29 of the 83 seats; opposition parties subsequently formed the Alliance of the Forces of Change, which had a parliamentary majority. In the presidential elections shortly afterwards, Mahamane Ousmane of the Democratic and Social Convention was elected in the second round, defeating Mamadou Tandja of the MNSD (who had received the most votes in the first round). Following a split in the AFC, early parliamentary elections were held in 1995 but did not significantly alter the makeup of the National Assembly.

A coup in January 1996 led to presidential elections in July, in which coup leader Ibrahim Baré Maïnassara was elected. The National Union of Independents for Democratic Renewal, formed to support him, won an absolute majority in the parliamentary elections later in the year amidst an opposition boycott. Another coup in 1999 led to general elections that year. Tandja was elected president and the MNSD emerged as the largest party in the National Assembly with 38 of the 83 seats. The 2004 elections saw Tandja re-elected and the MNSD remain the largest party.

A 2009 referendum resulted in the constitution being suspended and presidential elections being delayed. The parliamentary elections went ahead, with an opposition boycott allowing the MNSD to win a majority. However, Tandja was removed from office in a 2010 coup and general elections were held in 2011, which saw Mahamadou Issoufou of the Nigerien Party for Democracy and Socialism (PNDS) elected president and the PNDS become the largest party in the National Assembly. Issoufou was re-elected in 2016 general elections, with the second round of the presidential elections boycotted by the opposition. The PNDS made significant gains in the parliamentary elections, but failed to win a majority. 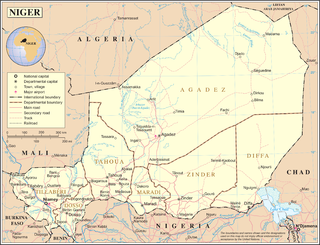 Lieutenant Colonel (ret.) Mamadou Tandja is a Nigerien politician who was President of Niger from 1999 to 2010. He was President of the National Movement of the Development Society (MNSD) from 1991 to 1999 and unsuccessfully ran as the MNSD's presidential candidate in 1993 and 1996 before being elected to his first term in 1999. While serving as President of Niger, he was also Chairman of the Economic Community of West African States from 2005 to 2007.

Mahamane Ousmane is a Nigerien politician. He was the first democratically elected and fourth President of Niger, serving from 16 April 1993 until his ousting in a military coup d'état on 27 January 1996. He has continued to run for president in each election since his ousting, and he was president of the National Assembly from December 1999 to May 2009. He is the president of the Democratic and Social Convention-Rahama (CDS), a major political party that is currently in opposition.

Mahamadou Issoufou is a Nigerien politician who has been the President of Niger since 7 April 2011. Issoufou was the Prime Minister of Niger from 1993 to 1994, President of the National Assembly from 1995 to 1996, and he has been a candidate in each presidential election since 1993. He led the Nigerien Party for Democracy and Socialism (PNDS-Tarayya), a social democratic party, from its foundation in 1990 until his election as president in 2011. During the Presidency of Mamadou Tandja (1999–2010), Issoufou was the main opposition leader.

The Nigerien Party for Democracy and Socialism is a political party in Niger. It is a broadly left-wing party, part of the Socialist International, and since 2011 it has been in power following the election of its long-time leader, Mahamadou Issoufou. Mohamed Bazoum is President of the PNDS, and its Secretary-General is Foumakoye Gado. 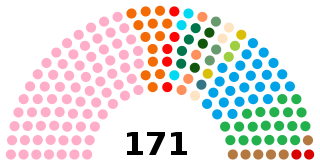 Mohamed Bazoum is a Nigerien politician who has been President of the Nigerien Party for Democracy and Socialism (PNDS-Tarayya) since 2011. He served in the government of Niger as Minister of Foreign Affairs from 1995 to 1996 and again from 2011 to 2015. He was Minister of State at the Presidency from 2015 to 2016, and was Minister of State for the Interior between 2016 and the summer of 2020, when he resigned to focus on running for that winter's presidential election.

Hassoumi Massaoudou is a Nigerien politician who has served in the government of Niger as Minister of Finance since 2016. A leading member of the Nigerien Party for Democracy and Socialism (PNDS-Tarayya), he was Minister of Communication, Culture, Youth and Sports from 1993 to 1994, President of the PNDS Parliamentary Group from 1999 to 2004, Director of the Cabinet of the President from 2011 to 2013, Minister of the Interior from 2013 to 2016, and Minister of National Defense in 2016.