Most traditions existed quite independently in French West Africa but have begun to form a mixture of styles since the 1960s. While Niger's popular music has had little international attention (in comparison with the music of neighbors Mali or Nigeria), traditional and new musical styles have flourished since the end of the 1980s.

The Hausa, who make up over half of the country's population, use the duma for percussion and the molo (a lute) in their Griot traditions, along with the Ganga, alghaïta (shawm) and kakaki (trumpet) for martial, state, and ceremonial occasions. These uses are typified by the ceremonial usage of large trumpets to mark the authority of the Sultanate of Damagaram in the southeast Zinder area (see Hausa music).

Over 20% of Niger's population are Zarma people, while the Tuareg and Fulani both number around a million in the early 21st century, somewhat less than 10% each. The Kanuri are just over 4% while the Toubou, Diffa and Gurma are all small populations of less than a half percent each. [1]

The Zarma inhabit the region around the capital, Niamey. They play, generally solo, a variety of lutes ( xalam or molo), flutes and fiddles and, like the Fula, carry on the griot tradition of caste-based praise singers and musicians. Songhai traditional music was the topic of extensive study in the late colonial and early independence period. [2]

The Tuareg of the north are known for romantic, informal sung/spoken love poetry performed by both men and women, with voices accompanied by clapping, tinde drums (in women's songs) and a one-stringed viol (in men's songs) (see Tuareg music).

The Fula and Wodaabe, a nomadic desert subgroup of Fula, practise group singing accompanied by clapping, stamping and bells. The Wodaabe Gerewol festival is one example of this repeating, hypnotic and percussive choral tradition. The Beriberi too are known for complex polyphony singing. To get an overall understanding of traditional music and instruments in Niger visit the traditional instrument museum at the CFPM Taya in Niamey. An amazing collection of drums, string instruments and flutes from all tribes in Niger.

Music for the purpose of entertainment has not been readily accepted by the Nigerien government, though restrictions have loosened since the death of Seyni Kountché in 1987. A competitive music festival called the Prix Dan Gourmou helped inspire a musical renaissance in the country, led by people like Alassane Dante. The Centre for Musical Training and Promotion was founded in 1990, furthering this process, using a grant from the European Development Fund. Musicians formed bands to seek fame both domestically and internationally, with the most successful being the group Takeda, formed by Reggae singer Adams Junior, [3] [4] Saâdou Bori, Fati Mariko, Mamoudou Abdousalam, Sani Aboussa, John Sofakolé, Moussa Poussy and Yacouba Moumouni.

In the mid-1990s, internationally renowned record producer Ibrahima Sylla travelled to Niamey and ended up signing Poussy and Saadou Bori. He has since also helped release records from Adam's Junior and from Mamar Kassey, perhaps the best known Nigerien group outside the country, who combine traditional Songhai styles and modern jazz.

The band Etran Finatawa ("the stars of tradition"), consisting of Tuareg and Wodaabe members, formed in 2004 at the Festival in the Desert. Between 2004 and 2015 Etran Finatawa toured the globe with performances in over 45 countries.[ citation needed ]

Since 2008 Tal National have been the most popular modern band in Niger. They are based in Niamey. Their 2008 album A-Na Waya reached the top of the charts in Niger and earned the band numerous awards. In 2013 they signed a worldwide record deal with Fat Cat Records [5] for the album "Kaani".

Another popular band, Groupe Sogha, created in 2004, has been a popular neo-traditional musical group that combines traditional and modern instruments in its music composed of ten members, five instrumentalists, three singers, and two dancers. The group was Niger's music ambassador for the fifth Francophone Games in Niamey. Sogha has two albums to its credit recorded under the artistic direction of the maestro Boncana Maiga. [6]

Rap Nigerien, a mélange of different languages spoken in Niger, appeared at the end of the 1990s. The music is relaxed and mellow, mixed with the sounds of traditional musical styles from the many ethnicities in the country. It grew into an interesting sociologic phenomenon, expanding what was expected of domestic popular entertainment. The young and disaffected have used Rap Nigerien to give voice to popular complaints - forced marriages, child labor, corruption, poverty and other problems.

Rap Nigerien also spontaneously appeared in UNICEF grassroots cultural programs, one of the few outlets for large scale performance in the country. In August 2004, UNICEF opened the competition "Scene Ouverte Rap", where 45 new groups were selected from among an over 300 entrants. The competition performances took place at the Centre Culturel Franco – Nigerien between the 5th and 14 August.

A large number of Rap Nigerien acts grew out of this scene and remain active, with the best known being Awn, Tchakey, Kaidan Gaskya, Wass Wong and Djoro G. Newer groups, such as Haskey Klan, Kamikaz, Rass Idris and Metaphor, have since appeared.

Agadez, formerly spelled Agadès, is the fifth largest city in Niger, with a population of 110,497 based on the 2012 census. The capital of Agadez Region, it lies in the Sahara desert, and is also the capital of Aïr, one of the traditional Tuareg–Berber federations. The historic centre of the town has been designated a World Heritage Site by UNESCO. 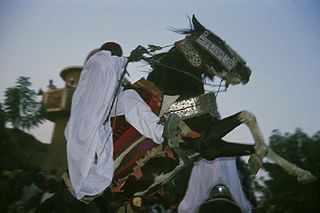 The culture of Niger is marked by variation, evidence of the cultural crossroads which French colonialism formed into a unified state from the beginning of the 20th century. What is now Niger was created from four distinct cultural areas in the pre-colonial era: the Djerma dominated Niger River valley in the southwest; the northern periphery of Hausaland, made mostly of those states which had resisted the Sokoto Caliphate, and ranged along the long southern border with Nigeria; the Lake Chad basin and Kaouar in the far east, populated by Kanuri farmers and Toubou pastoralists who had once been part of the Kanem-Bornu Empire; and the Tuareg nomads of the Aïr Mountains and Saharan desert in the vast north. Each of these communities, along with smaller ethnic groups like the pastoral Wodaabe Fula, brought their own cultural traditions to the new state of Niger.

Rap Nigerien is a hip hop music style that first appeared in Niamey, Niger, at the end of 1998.

Yacouba Moumouni is a Nigerien singer and flautist. As the leader of the jazz-ethnic band Mamar Kassey, he is one of the best-known Nigerien musicians outside Niger.

Mamar Kassey is a jazz-pop-ethnic band from Niger. It is named after a legendary warrior who extended the Songhai Empire into the Sahara. 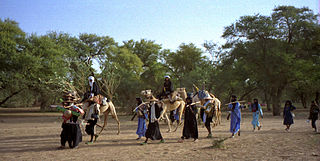 The Wodaabe, also known as the Mbororo or Bororo, are a small subgroup of the Fulani ethnic group. They are traditionally nomadic cattle-herders and traders in the Sahel, with migrations stretching from southern Niger, through northern Nigeria, northeastern Cameroon, southwestern Chad, western region of the Central African Republic and the northeastern of the Democratic Republic of Congo. The number of Wodaabe was estimated in 2001 to be 100,000. They are known for their elaborate attire and rich cultural ceremonies. 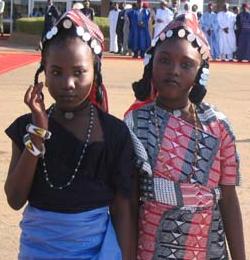 The Zarma people are an ethnic group predominantly found in westernmost Niger. They are also found in significant numbers in the adjacent areas of Nigeria and Benin, along with smaller numbers in Burkina Faso, Ivory Coast, Ghana, Togo, and Cameroon.

The Azawagh is a dry basin covering what is today the northwestern Niger, as well as parts of northeastern Mali and southern Algeria. The Azawagh is mainly made up of Sahelian and Saharan flatlands and has a population that is predominantly Tuareg, with some Arabic-speaking, Bouzou and Wodaabe minorities and a recent influx of Hausa and Zarma.

The Kaocen revolt was a Tuareg rebellion against French colonial rule of the area around the Aïr Mountains of northern Niger during 1916–17.

The Cinema of Niger began in the 1940s with the ethnographical documentary of French director Jean Rouch, before growing to become one of the most active national film cultures in Francophone Africa in the 1960s-70s with the work of filmmakers such as Oumarou Ganda, Moustapha Alassane and Gatta Abdourahamne. The industry has slowed somewhat since the 1980s, though films continue to be made in the country, with notable directors of recent decades including Mahamane Bakabe, Inoussa Ousseini, Mariama Hima, Moustapha Diop and Rahmatou Keïta. Unlike neighbouring Nigeria, with its thriving Hausa and English-language film industries, most Nigerien films are made in French with Francophone countries as their major market, whilst action and light entertainment films from Nigeria or dubbed western films fill most Nigerien theatres.

Seasonal migration, locally called the Exode, plays an important part of the economic and cultural life of the West African nation of Niger. While it is a common practice in many nations, Niger sees as much as a third of its rural population travel for seasonal labour, during the Sahelian nation's long dry season. Common patterns of seasonal travel have been built up over hundreds of years, and destinations and work vary by community and ethnic group.

The Kurtey people are a small ethnic group found along the Niger River valley in parts of the West African nations of Niger, Benin, Mali, and Nigeria. They are also found in considerable numbers in Ghana, Togo, Ivory Coast, and Burkina Faso.

Etran Finatawa is a Niger-based band, formed in 2004 during the Festival au Désert near Timbuktu, Mali. The music of Etran Finatawa blends the traditional music of the Wodaabe and Tuareg people with western instruments such as the electric guitar. 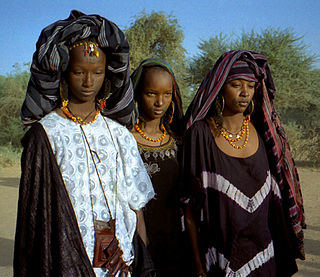 Women in Niger are women that are from or live in the West African country of Niger. These women belong to a population in which 98% are practitioners of Islam. Most of the laws adopted by the government of Niger to protect the rights of Nigerien women are most of the time based on Muslim beliefs.

The Songhai proper are an ethnic group in the northwestern corner of Niger's Tillaberi Region, an area historically known in the country as Songhai. They are a subgroup of the broader Songhai group. Even though the Songhays have so much in common with the Zarma people to the extent some Songhais may refer to themselves and their dialect as "Zarma", both see themselves as two different people.