The Western Sahara has an established music tradition. Many of the well-known from the country musicians have settled in Dakar, where they mingled further with musicians from West Africa.

Sahrawi music shares much in common with neighbouring musical traditions such as those of Mauritania and southern Morocco, yet retain aspects of pre-colonial heritage. [1] The Tbal is the basic instrument of percussion, though the traditional string instrument called Tidinit, has largely been replaced by electric guitar.

The first Sahrawi music LP, titled Polisario vencerá, was recorded live in Barcelona, in 1982 by the band Shahid El Uali.

Some performers are tribespeople who have lived a nomadic existence, which is true of Mariem Hassan. [2]

In 2003 Nubenegra edited the album Nar (Fire) from guitarist and singer Nayim Alal.

In 2008, Aziza Brahim released with the French label Reaktion her first EP, titled Mi Canto (My Singing). Her LP Mabruk with her band Gulili Mankoo is scheduled for June 2012. 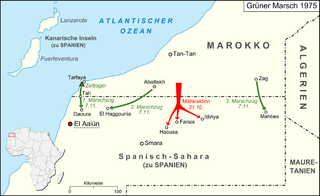 The Green March was a strategic mass demonstration in November 1975, coordinated by the Moroccan government, to force Spain to hand over the disputed, autonomous semi-metropolitan province of Spanish Sahara to Morocco. The demonstration of some 350,000 Moroccans advanced several kilometres into the Western Sahara territory. Morocco later gained control over most of the former Spanish Sahara, which it continues to hold. 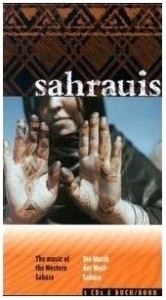 Sahrauis: The Music of the Western Sahara is a three-disc box set of Saharawi music, published by the Spanish label Nubenegra. It was the first compilation of such songs released in the United States. The producers of the album travelled to the Sahrawi refugee camps and spent 14 days with the artists to record the CDs 1 & 2 of the compilation, with the aim of recording with the finest musicians and singers the traditional Sahrawi music (Haul) of the past and present.

Aminatou Ali Ahmed Haidar, sometimes known as Aminetou, Aminatu or Aminetu, is a Sahrawi human rights activist and an advocate of the independence of Western Sahara. She is often called the "Sahrawi Gandhi" or "Sahrawi Pasionaria" for her nonviolent protests. She is the president of the Collective of Sahrawi Human Rights Defenders (CODESA). She was imprisoned from 1987 to 1991 and from 2005 to 2006 on charges related to her independence advocacy. In 2009, she attracted international attention when she staged a hunger strike in Lanzarote Airport after being denied re-entry into Moroccan Western Sahara. Haidar has won several international human rights awards for her work, including the 2008 Robert F. Kennedy Human Rights Award, 2009 Civil Courage Prize and 2019 Right Livelihood Award.

The Sahrawi Association of Victims of Grave Violations of Human Rights Committed by the Moroccan State, or ASVDH, is a Sahrawi human rights organization in the Moroccan-occupied areas of Western Sahara.

Brahim Dahane is a Sahrawi human rights activist and President of the Sahrawi Association of Victims of Grave Human Rights Violations Committed by the Moroccan State.

Mariem Hassan was a Sahrawi singer and lyricist from Western Sahara. She usually sang in Hassaniyya, an Arabic dialect spoken mostly in Western Sahara and Mauritania, and occasionally in Spanish. Her use of the Spanish language was related to the former status of Western Sahara as a Spanish colony.

Najm Allal is a singer, guitarist and writer of lyrics in Spanish from Western Sahara.

Western Saharan literature in Spanish is a small body of writing which has emerged in contemporary times mainly in the form of lyrics written by singers who have chosen the Spanish language as their medium and who use the Saharan Spanish dialect.

Aziza Brahim is a Sahrawi singer and actress. 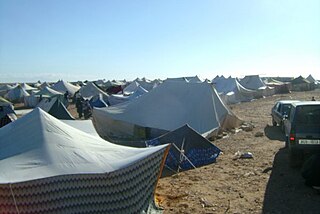 The Gdeim Izik protest camp was a protest camp in Western Sahara, established on 9 October 2010 and lasting into November that year, with related incidents occurring in the aftermath of its dismantlement on 8 November. The primary focus of the protests was against "ongoing discrimination, poverty and human rights abuses against local citizens".

The 2011 Western Saharan protests began on 25 February 2011 as a reaction to the failure of police to prevent anti-Sahrawi looting in the city of Dakhla, Western Sahara, and blossomed into protests across the territory. They were related to the Gdeim Izik protest camp in Western Sahara established the previous fall, which had resulted in violence between Sahrawi activists and Moroccan security forces and supporters. The protests also purportedly drew inspiration from the Arab Spring and successful revolts in Tunisia and Egypt, though according to some commentators, the Arab Spring proper did not reach Western Sahara. 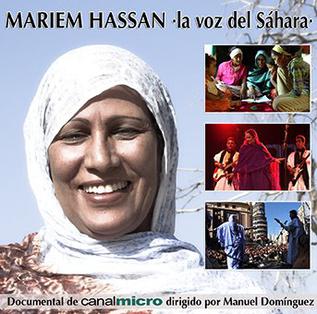 Deseos is the 2005 debut solo album of the Sahrawi singer Mariem Hassan. The album was recorded at Axis estudios in Madrid, and produced by guitarist Baba Salama, who died of leukemia one week before the release of the album. With the use of two electric guitars and two tbals, the album had been hailed as a fresh actualization of the traditional Sahrawi Haul traditional music. The song "La Tumchu anni" is one of the highlights, a picturesque desert blues. It also contains one of Mariem's most known songs, "La Intifada", about the 2005 Sahrawi Independence Intifada. "El Chouhada" is dedicated to her three dead brothers, who were killed fighting during the Western Sahara War, while in "Mutamaniyat" she asks God for the healing of her breast cancer.

Shouka is the second album of Sahrawi singer Mariem Hassan. It was recorded again at Axis studios, in Madrid, and produced by Manuel Domínguez, who is also the boss of the label Nubenegra. The album reached Number 1 on the World Music Charts Europe (WMCE) in March 2010. "Shouka", the central song that titles the album, is a new experience in the Sahrawi music, as it is structured as a cantata. Taking the verses of Sahrawi poet Lamine Allal, Hassan developed a nine paragraph critical response to the 1976 speech of then Spanish opposition leader and later president of Spain Felipe González at the Sahrawi refugee camps, by using all scales and rhythms of the Haul. In this work, Mariem's group is completed with Lamgaifri Brahim and Vadiya Mint El Hanevi. Several other musicians contributed to the album, as Senegalese Malick Diaw (guitar), Spanish Kepa Osés (bass), Hugo Westerdahl (bass), Josemi Sánchez (guitar) and Jaime Muñoz (flutes), Iranian Behnam Samani and Davood Varzideh (ney), and Cuban-Haitian Mel Seme (percussionist).

Mi Canto is the debut solo digital ep of Sahrawi singer Aziza Brahim. It was released worldwide on 12 January 2009 by the French label Reaktion, reaching shortly after number one on the World music list of the web Emusic.com. Brahim, who produced the album herself, is accompanied by her band Gulili Mankoo in the recording.

Brahim Ghali is the current president of the Sahrawi Arab Democratic Republic (SADR) and former SADR Ambassador to Algeria. Ghali has served as a historic figure and played a key role in the struggle of the Sahrawi people for self-determination and independence from Morocco. He was instrumental in the creation of the Movement for the Liberation of the Saguia el Hamra and Wadi el Dhahab, the 1970 Zemla Intifada against Spanish rule, the foundation of the Popular Front for the Liberation of Saguia el-Hamra and Río de Oro in 1973, and the Sahrawi Republic in 1976. He also played a major role in the Western Sahara War and establishment of MINURSO, the UN peacekeeping mission for the Western Sahara.

El Aaiun egdat is the third album of Sahrawi singer Mariem Hassan. The album reached Number 1 on the World Music Charts Europe (WMCE) on June and July 2012. It was also elected as the best album presented at the 2012 edition of the World Village Festival in Helsinki, Finland.

Mabruk is the first LP of Sahrawi singer Aziza Brahim, after her 2008 EP Mi Canto. The album is accompanied by a 16-page booklet which includes French translation of the songs, and a text by Sahrawi writer Bahia Mahmud Awah on the history of their people. It was elected as 2012 World Music Album of the Year by the Dutch magazine Heaven.