Several styles of the traditional music of Venezuela , such as salsa and merengue, are common to its Caribbean neighbors. Perhaps the most typical Venezuelan music is joropo, a rural form which originated in the llanos, or plains.

Joropo was developed by creative artists such as Juan Vicente Torrealba, Ignacio Figueredo, Augusto Bracca, Eneas Perdomo and Angel Custodio Loyola, who helped to popularize the music throughout the country. Since then a slick, contemporary form of pop-llanera has developed which has earned the scorn of some purists who perceive it as stale and watered-down. Some singers, such as Adilia Castillo, Lorenzo Herrera, Simon Diaz, Mario Suarez, Edith Salcedo, Magdalena Sanchez, Rafael Montaño, Reyna Lucero, Cristina Maica, José Catire Carpio, Cristobal Jimenez, Juan de los Santos Contreras (El Carrao de Palmarito) and Reynaldo Armas have maintained a huge following over the years. In a similar vein, there is also neo-folklore, which takes traditional music and arranges it in an electronic style.

Another very popular music in Venezuela is the Gaita Zuliana . This genre originated from the region of Zulia State and is very popular during the Christmas season. The gaita united to the Aguinaldo, conforms the national representation of the Venezuelan Christmas. In the east, the malagueña, punto and galerón accompanies the velorios de cruz de mayo, (religious tradition, that is celebrated on 3 May in honor to the Christian cross). In the Venezuelan Andes, the Venezuelan bambuco is a local variation of the bambuco. Other forms include polo and the Venezuelan waltz. The Quinteto Contrapunto, founded by Rafael Suárez and Aida Navarro, was a celebrated Venezuelan vocal quintet which reached nationwide and international celebrity in the early 1960s, and was very active for about a decade.

Then there is also the genre commonly known as "Onda Nueva" (New Wave), which is a combination of joropo and jazz music, with influences from the Brazilian Bossa Nova. The genre was introduced by Aldemaro Romero with a special contribution by famed drummer and timpanist Frank Hernandez, nicknamed "El Pavo" (The Peacock) by employing a very peculiar drum beat. The term was coined by jazz analyst Jacques Braunstein after having been shown a copy of Romero's earliest composition called "Araguita", (originally to be used as jingle material), which Braunstein described as "something of a new wave". Onda Nueva music was heralded as the Venezuelan Bossa Nova with a very particular seal.

Venezuelan calypso music (including Calypso de El Callao), imported from Trinidad in the 1880s by immigrants arriving during a gold rush, has its own distinctive rhythms and lyrical style. Another imported genre is Cuban-American salsa, which has produced several domestic superstars, including Oscar D'Leon. Dominican merengue, Cuban and Colombian Latin pop acts such as Billo's Caracas Boys, the Porfi Jiménez Orchestra and Los Melódicos.

The galerón is a genre of Venezuelan typical song. It is related to the guajiro (Cuba), torbellino (Colombia), and trova (Puerto Rico). In general, it is accompanied by mandolin, cuatro, and guitar.

In the late 1960s and early 1970s a few Venezuelan artists began experimenting with sounds, using emerging electronic equipment that was being produced. Artists like Vytas Brenner and Grupo C.I.M. used Moog style synthesizers and effects to embrace the shift in new sounds. Alfredo del Mónaco, who founded the Venezuelan branch of ISCM, is considered the pioneer in electronic music in Venezuela [1] having released Estudio electrónico I para cinta in 1968. Jose Enrique Sarabia also known as "Chelique," who was already internationally known for producing songs since the late 50s like "Ansiedad," helped by other gifted musicians, recorded and released a record in 1971 through a private press titled: 4 Fases del Cuatro - Música Venezolana desarrollada Electrónicamente por Chelique Sarabia (4 Phases of Four - Venezuelan Music Electronically Developed by Chelique Sarabia). In 1973, when exclusivity of the private contract ended, Chelique commercially released the record under a different title: Revolución "Electrónica" en Música Venezolana (Electronic Revolution in Venezuelan Music). Revolución "Electrónica" en Música Venezolana is notable for being one of the earliest electronic records in Venezuela and is considered a trailblazing album for electronic music in Latin America.

In the late 1990s a very strong electronic music movement spread through the country. Several big multimedia festivals took place, such as "Caracas No Duerme," "AX," "Petaquire," and "Mare Nostrum." These events combined music with the video and performance art of Venezuelan artists such as Luis Poleo, Frank Wow, and Sony. The main bands/DJ's of this era are Ojo Fatuo, DJ Oddo and DJ Wyz.

Juana Maria de la Concepcion, commonly referred to as Conny Méndez, born 11 April 1898 in Caracas, was a composer, singer, writer, caricaturist and actress who produced more than 40 compositions, such as: Yo soy venezolana, Chucho y Ceferina, La Negrita Marisol, Venezuela Habla Cantando, and many others.

Rubén Cedeño, composer of folk and children's music of Venezuela, he appears in the Venezuelan music encyclopedia. [2] Singer, composer, investigator, painter and writer.

His most recognized works are: The Aguinaldo Que Navidad part of the Venezuelan Christmas repertoire and interpreted by the mezzo-soprano Morella Muñoz, Cantata infantil Simón Bolívar, Misa de mi Tierra among others. It was National Prize of popular music of the INAVI with his valse Nora. The hymn Hail to the Statue of Liberty, received the congratulation of President Ronald Reagan.

Gustavo Matamoros is a renowned Venezuelan composer dedicated to the experimentation with sound and its relationship with the human mind and culture. He has worked mainly with contemporary techniques such as electroacoustics, mixed media, performance, installations, radiophony and multimedia spectacles. He resides in the US. The work of composer, arranger and musical producer Jesús "Chuchito" Sanoja is considered an important part of the Venezuelan cultural patrimony.

Panama is a Central American country, inhabited mostly by mestizos. The music of Panama is heavily based on the folk music of Spain, particularly that of Andalusia and was influenced first by the indigenous populations of Kunas, Teribes, Ngobe Bugle and others, and then by the black population who were brought over, first as slaves from Africa, between the 16th century and the 19th century, and then voluntarily to work on the Panamanian Railroad and Canal projects between the 1840s and 1914.

Eduardo Marturet is a Venezuelan conductor and composer represented by Tempo Primo. He is the Music Director and Conductor of The Miami Symphony Orchestra (MISO)

Antonio Lauro was a Venezuelan musician, considered to be one of the foremost South American composers for the guitar in the 20th century. 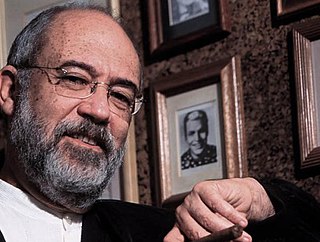 Alberto Naranjo [nah-rahn'-ho] was a Venezuelan musician. His mother, the singer Graciela Naranjo, was a radio, film and television pioneer in her homeland. Largely self-taught, Naranjo embarked on a similar musical course, becoming – like his mother – one of Venezuela's icons of contemporary popular music.

Rodrigo Riera, was a Venezuelan guitarist and composer. He wrote a vital and important body of works for the guitar, inspired by and dedicated to the rich musical legacy of his region in the Lara state in Western Venezuela, displaying a loving nationalism that led him to be associated with the work of Antonio Lauro but with a technique that is more accessible to beginners and intermediate guitar players.

José Enrique “Chelique” Sarabia is a Venezuelan poet, musician, publicist, and television producer. He has written more than 1000 songs registered at the Society of Authors and Composers of Venezuela (SACVEN), also has been one of the most successful Venezuelan musicians of the 20th century, recognized universally for being the author of “Ansiedad” (1958), which was later covered by Viktor Lazlo for her compilation album Sweet, Soft N' Lazy. In addition, he is the author of songs that comprise the Venezuelan cultural heap such as "Cuando no sé de ti", "Chinita de Maracaibo", "No te muerdas los labios", "Piragüero", "Ayudame", "Te Necesito", "Mi Propio Yo", and "En este País".

Roberto Ruscitti, was an Italian-Venezuelan composer, soloist and pianist, Nationally and internationally recognized for his compositions and for his interpretations of Venezuelan folk music. As a matter of fact, one can still regularly hear his Tango in Paradise in Japan.

Victoria Sánchez is a Venezuelan conductor, actress, singer and pianist from El Sistema of Venezuela. She is Music Director and Conductor of ALMAS, Sinfónica de Jóvenes Latinoamericanas.

Ángel Custodio Loyola, was a Venezuelan singer and composer, known as a pioneer in the joropo genre. He wrote many popular songs, including "El Gavilán", "Tierra Negra", "Carnaval", "Sentimiento Llanero", "Catira Marmolereña", "Faenas Llaneras", and "Puerto Miranda". He is considered to have been one of the greatest exponents of llanera music. 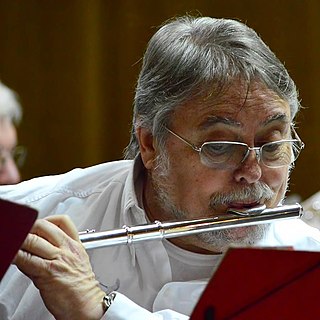 Pablo Goldstein is an Argentine American musician and music therapist. He is a skilled player of a wide range of instruments, such as various types of flutes, accordion, piano, pipe organ, balalaika and acoustic guitar.

Tourism in Venezuela has been developed considerably for decades, particularly because of its geographical position, the variety of landscapes, the richness of plant and wildlife, the artistic expressions and the privileged tropical climate of the country, which affords each region throughout the year. Since 2013 the country is having a very severe economic and political crisis affecting tourism all over the country. 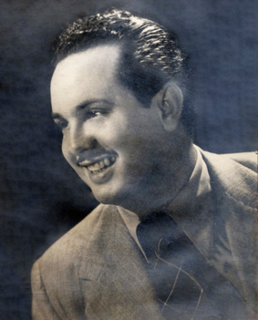 Luis Alfredo Laguna(lah-goo'-nah) was a Venezuelan musician and songwriter.

Los Cuñaos[coo-nyah'-os] is an eight-part vocal group established in Caracas, Venezuela in 1974. Their repertoire is based on popular Venezuelan songs adapted to their own unique style of singing, performing a crossover of traditional and pop genres while contrasting their work with rich and warm harmonies.

Sergio Rosales is a Venezuelan conductor. He formed the El Sistema and is the music director of the Simon Bolivar Youth Symphonic Band.

Fedora Alemán was a Venezuelan operatic soprano. One of Venezuela's most celebrated singers, she performed in concert halls throughout Latin America and Europe.

The Pepsi Venezuela Music Awards are honors for the best music in Venezuela in various genres.

Alexis Rossell is a Venezuelan fusion harpist and folk musician born on March 3, 1951 in Coro, Falcón. He is brother of the late Venezuelan theater director Levy Rossell. He graduated from the Juan José Landaeta National Conservatory of Music in Caracas. Rosell fuses typical Venezuelan music and instruments with elements of rock music.