Last updated March 19, 2019
Not to be confused with Cambiata.

In music, changing tones (also called double neighboring tones and neighbor group) consists of two consecutive non-chord tones. The first moves in one direction by a step from a chord tone, then skips by a third in the opposite direction to another non-chord tone, and then finally resolves back to the original chord tone. Changing tones appear to resemble two consecutive neighbor tones; an upper neighbor and a lower neighbor with the chord tone missing from the middle. The changing tone functions as a way to decorate, or embellish, a chord tone and are also used to provide rhythmic interest between common tones. In rare instances, changing tones can be heard as musical cryptograms, such as the cruciform melody.

In music, ornaments or embellishments are musical flourishes—typically, added notes—that are not essential to carry the overall line of the melody, but serve instead to decorate or "ornament" that line, provide added interest and variety, and give the performer the opportunity to add expressiveness to a song or piece. Many ornaments are performed as "fast notes" around a central, main note.

In music theory, the tritone is defined as a musical interval composed of three adjacent whole tones. For instance, the interval from F up to the B above it is a tritone as it can be decomposed into the three adjacent whole tones F–G, G–A, and A–B. According to this definition, within a diatonic scale there is only one tritone for each octave. For instance, the above-mentioned interval F–B is the only tritone formed from the notes of the C major scale. A tritone is also commonly defined as an interval spanning six semitones. According to this definition, a diatonic scale contains two tritones for each octave. For instance, the above-mentioned C major scale contains the tritones F–B and B–F. In twelve-equal temperament, the tritone divides the octave exactly in half.

In music, modulation is the change from one key to another. This may or may not be accompanied by a change in key signature. Modulations articulate or create the structure or form of many pieces, as well as add interest. Treatment of a chord as the tonic for less than a phrase is considered tonicization.

Comping is the chords, rhythms, and countermelodies that keyboard players, guitar players, or drummers use to support a jazz musician's improvised solo or melody lines. It is also the action of accompanying, and the left-hand part of a solo pianist.

In music, a pedal point is a sustained tone, typically in the bass, during which at least one foreign, i.e., dissonant harmony is sounded in the other parts. A pedal point sometimes functions as a "non-chord tone", placing it in the categories alongside suspensions, retardations, and passing tones. However, the pedal point is unique among non-chord tones, "in that it begins on a consonance, sustains through another chord as a dissonance until the harmony", not the non-chord tone, "resolves back to a consonance."

Voice leading is the linear progression of individual melodic lines and their interaction with one another to create harmonies, typically in accordance with the principles of common-practice harmony and counterpoint.

Music theorists have often used graphs, tilings, and geometrical spaces to represent the relationship between chords. We can describe these spaces as chord spaces or chordal spaces, though the terms are relatively recent in origin.

In music, an irregular resolution is resolution by a dominant seventh chord or diminished seventh chord to a chord other than the tonic. Regarding the dominant seventh, there are many irregular resolutions including to a chord with which it has tones in common or if the parts move only a whole or half step. Consecutive fifths and octaves, augmented intervals, and false relations should still be avoided. Voice leading may cause the seventh to ascend, to be prolonged into the next chord, or to be unresolved.

Cambiata, or nota cambiata, has a number of different and related meanings in music. Generally it refers to a pattern in a homophonic or polyphonic setting of a melody where a note is skipped from in one direction and this is followed by the note, and then by motion in the opposite direction, and where either the note skipped from is distinguished as a dissonance or the note skipped to is distinguished as a non-harmonic or non-chordal tone. With regards to music pedagogical activities and species counterpoint, it refers to a more specific set of patterns. 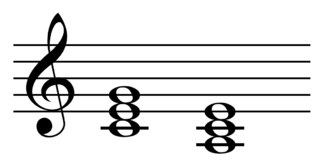 The substitution of the major sixth for the perfect fifth above in the major triad and below in the minor triad results in the parallel of a given triad. In C major thence arises an apparent A minor triad, D minor triad (Sp), and E minor triad (Dp).

In music, a common tone is a pitch class that is a member of, or common to two or more chords or sets. Typically, it refers to a note shared between two chords in a chord progression. According to H.E. Woodruff: