In music from Western culture, a sixth is a musical interval encompassing six note letter names or staff positions (see Interval number for more details), and the major sixth is one of two commonly occurring sixths. It is qualified as major because it is the larger of the two. The major sixth spans nine semitones. Its smaller counterpart, the minor sixth, spans eight semitones. For example, the interval from C up to the nearest A is a major sixth. It is a sixth because it encompasses six note letter names (C, D, E, F, G, A) and six staff positions. It is a major sixth, not a minor sixth, because the note A lies nine semitones above C. Diminished and augmented sixths (such as C♯ to A♭ and C to A♯) span the same number of note letter names and staff positions, but consist of a different number of semitones (seven and ten, respectively).

The intervals from the tonic (keynote) in an upward direction to the second, to the third, to the sixth, and to the seventh scale degrees (of a major scale are called major. [2]

A commonly cited example of a melody featuring the major sixth as its opening is "My Bonnie Lies Over the Ocean". [3]

The major sixth is one of the consonances of common practice music, along with the unison, octave, perfect fifth, major and minor thirds, minor sixth, and (sometimes) the perfect fourth. In the common practice period, sixths were considered interesting and dynamic consonances along with their inverses the thirds. In medieval times theorists always described them as Pythagorean major sixths of 27/16 and therefore considered them dissonances unusable in a stable final sonority. We cannot know how major sixths actually were sung in the Middle Ages. In just intonation, the (5/3) major sixth is classed as a consonance of the 5-limit.

A major sixth is also used in transposing music to E-flat instruments, like the alto clarinet, alto saxophone, E-flat tuba, trumpet, natural horn, and alto horn when in E-flat, as a written C sounds like E-flat on those instruments.

Assuming close-position voicings for the following examples, the major sixth occurs in a first inversion minor triad, a second inversion major triad, and either inversion of a diminished triad. It also occurs in the second and third inversions of a dominant seventh chord.

The septimal major sixth (12/7) is approximated in 53 tone equal temperament by an interval of 41 steps or 928 cents.

Many intervals in a various tuning systems qualify to be called "major sixth," sometimes with additional qualifying words in the names. The following examples are sorted by increasing width.

In just intonation, the most common major sixth is the pitch ratio of 5:3 ( play  (help·info)), approximately 884 cents.

In music, just intonation or pure intonation is the tuning of musical intervals as whole number ratios of frequencies. Any interval tuned in this way is called a just interval. Just intervals consist of members of a single harmonic series of a (lower) implied fundamental. For example, in the diagram at right, the notes G and middle C, are both members of the harmonic series of the lowest C and their frequencies will be 3 and 4 times, respectively, the fundamental frequency; thus, their interval ratio will be 4:3. If the frequency of the fundamental is 64 Hertz, the frequencies of the two notes in question would be 192 and 256. 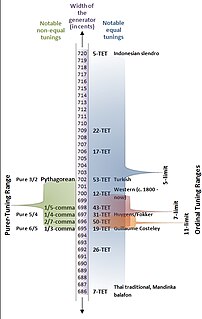 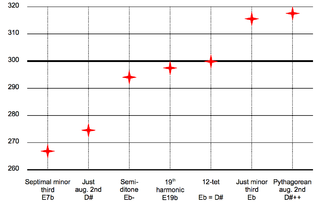 In music theory, a minor chord is a chord having a root, a minor third, and a perfect fifth. When a chord has these three notes alone, it is called a minor triad. For example, the minor triad built on C, called a C minor triad, has pitches C–E♭–G: 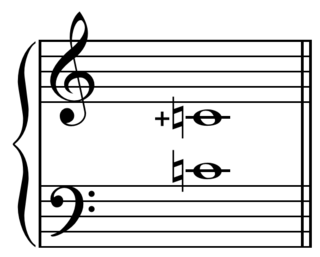 Quarter-comma meantone, or ​1⁄4-comma meantone, was the most common meantone temperament in the sixteenth and seventeenth centuries, and was sometimes used later. In this system the perfect fifth is flattened by one quarter of a syntonic comma (81:80), with respect to its just intonation used in Pythagorean tuning ; the result is . The purpose is to obtain justly intoned major thirds. It was described by Pietro Aron in his Toscanello de la Musica of 1523, by saying the major thirds should be tuned to be "sonorous and just, as united as possible." Later theorists Gioseffo Zarlino and Francisco de Salinas described the tuning with mathematical exactitude.

In music, 53 equal temperament, called 53 TET, 53 EDO, or 53 ET, is the tempered scale derived by dividing the octave into 53 equal steps. Play (help·info) Each step represents a frequency ratio of 2​1⁄53, or 22.6415 cents, an interval sometimes called the Holdrian comma. 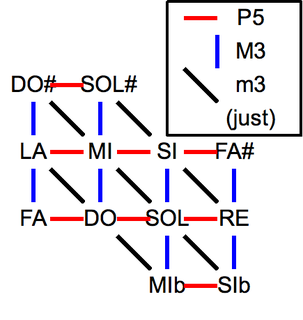