Cameroon, officially the Republic of Cameroon, is a country in Central Africa. It is bordered by Nigeria to the west and north; Chad to the northeast; the Central African Republic to the east; and Equatorial Guinea, Gabon and the Republic of the Congo to the south. Cameroon's coastline lies on the Bight of Biafra, part of the Gulf of Guinea and the Atlantic Ocean. Although Cameroon is not an ECOWAS member state, it is geographically and historically in West Africa with the Southern Cameroons which now form her Nord-Ouest and Sud-Ouest Regions having a strong West African history. However, since 2017, elements within the South West and North West regions have since declared an independent state called Ambazonia. The country is sometimes identified as West African and other times as Central African due to its strategic position at the crossroads between West and Central Africa. Cameroon is home to over 250 native languages spoken by nearly 25 million people. 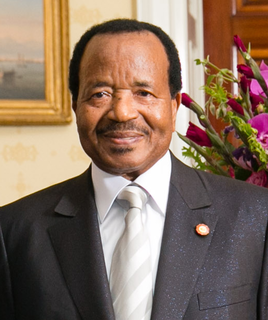 Child marriage is a marriage or similar union, formal or informal, between a minor and an adult or between two minors. The vast majority of child marriages are between a girl and a man, and are rooted in gender inequality. 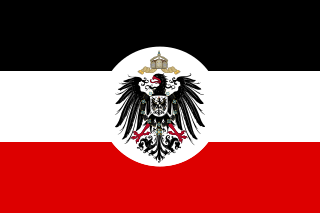 Kamerun was an African colony of the German Empire from 1884 to 1916 in the region of today's Republic of Cameroon. Kamerun also included northern parts of Gabon and the Congo with western parts of the Central African Republic, southwestern parts of Chad and far eastern parts of Nigeria.

Yaphet Frederick Kotto is an American actor known for numerous film roles, as well as starring in the NBC television series Homicide: Life on the Street (1993–1999) as Lieutenant Al Giardello. His films include the science-fiction/horror film Alien (1979), and the Arnold Schwarzenegger science-fiction/action film The Running Man (1987). He portrayed the main villain Dr. Kananga/Mr. Big in the James Bond movie Live and Let Die (1973). He appeared opposite Robert De Niro in the comedy thriller Midnight Run (1988) as FBI Agent Alonzo Mosley.

The Cameroon national football team, represents Cameroon in men's international football and It is controlled by the Fédération Camerounaise de Football. The team has qualified seven times for the FIFA World Cup, more than any other African team. However, the team has only made it once out of the group stage. They were the first African team to reach the quarter-final of the FIFA World Cup in 1990, losing to England in extra time. They have also won five Africa Cup of Nations and Olympic gold in 2000. The team represents Cameroon both in FIFA and Confederation of African Football (CAF). 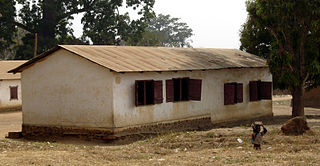 Cameroon is a Central African nation on the Gulf of Guinea. Bantu speakers were among the first groups to settle Cameroon, followed by the Muslim Fulani until German domination in 1884. After World War I, the French took over 80% of the area, and the British 20%. After World War II, self-government was granted, and in 1972, a unitary republic was formed out of East and West Cameroon. Until 1976 there were two separate education systems, French and English, which did not merge seamlessly. English is now considered the primary language of instruction. Local languages are generally not taught as there are too many, and choosing between them would raise further issues.

A jengu is a water spirit in the traditional beliefs of the Sawa ethnic groups of Cameroon, particularly the Duala, Bakweri, Malimba, Batanga, Bakoko,Oroko People and related Sawa peoples. Among the Bakweri, the name is liengu. Miengu are similar to Mami Wata spirits Bakoko the name is Bisima.

Breast ironing, also known as breast flattening, is the pounding and massaging of a pubescent girl's breasts, using hard or heated objects, to try to make them stop developing or disappear. The practice is typically performed by a close female figure to the victim, traditionally fulfilled by a mother, grandmother, aunt, or female guardian who will say she is trying to protect the girl from sexual harassment and rape, to prevent early pregnancy that would tarnish the family name, preventing the spread of sexually transmitted infections such as HIV/AIDs, or to allow the girl to pursue education rather than be forced into early marriage.

The Association des Guides du Cameroun is the national Guiding organization of Cameroon. It serves 3,000 members. Founded in 1943, the girls-only organization became an associate member of the World Association of Girl Guides and Girl Scouts in 1972 and a full member in 2014.

Claude Njiké-Bergeret is the grand daughter and daughter of the French Protestant missionaries Etienne Bergeret and Charles Bergeret which worked in the first half of the 20th century in the bamiléké area in Cameroon. She is the widow of the polygamic Bangangté chief Francois Njiké Pokam. She is also a book writer, farmer and community organiser near Foumbot.

Nigerian refugees are persons originating from the country of Nigeria, but seeking refuge outside the borders of their native country. 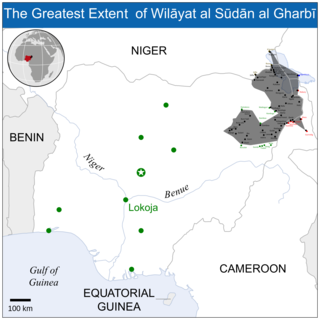 Starting in late January 2015, a coalition of West African troops launched an offensive against the Boko Haram insurgents in Nigeria.

Cameroon participated at the 2018 Summer Youth Olympics in Buenos Aires, Argentina from 6 October to 18 October 2018.

Germaine Ahidjo,, is a Cameroonian politician. She is the wife of the first president of the Cameroon, Ahmadou Ahidjo. She was thus the First Lady of Cameroon from 1960 until 1982.