Coast Guard Air Station Barbers Point is an Air Station of the United States Coast Guard located approximately 13½ miles west of Honolulu, at the Kalaeloa Airport, [2] on the Hawaiian Island of Oahu. Initially the Coast Guard established a base on the Hawaiian Archipelago in 1945, with a pair of PBY-5 Catalinas and one Grumman G-21 Goose. The air unit maintained supervision for the windward side of Oahu. In 1949 the Command moved to Naval Air Station Barbers Point, and in 1965 the unit received its current designation of Coast Guard Air Station Barbers point. For 24 years the Sikorsky HH-52 Seaguard was the primary SAR helicopter, unit 1987 when it was retired and replaced with the Aérospatiale HH-65 Dolphin. The fixed wing component has consisted of various models of the C-130 Hercules which have been assigned to the unit since 1959. Currently, AIRSTA Barbers Point has the HC-130H model in use, configured primarily as a search and rescue aircraft. It has the ability to airdrop rescue equipment to survivors at sea or on land. It can take off and land on short, unprepared airfields. [3] 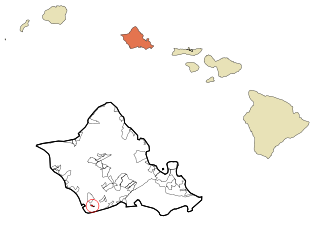 Kalaeloa is a census-designated place (CDP) in Honolulu County, Hawaii, United States. The population was 48 at the 2010 census. The community occupies the location of the former Naval Air Station Barbers Point, which was closed in 1999 and subsequently transferred to the State of Hawaiʻi. The geographical name, Ka lae loa, means "long point" in Hawaiian and is the native name for what has been called Barbers Point on Oʻahu. The area was known as Barbers Point because Captain Henry Barber wrecked his ship on a coral shoal at this location on October 31, 1796.

The Eurocopter MH-65 Dolphin is a twin-engined helicopter operated by the United States Coast Guard (USCG) for medevac-capable search and rescue (SAR) and armed Airborne Use of Force missions. It is a variant of the French-built Eurocopter AS365 Dauphin.

The Lockheed HC-130 is an extended-range, search and rescue (SAR)/combat search and rescue (CSAR) version of the C-130 Hercules military transport aircraft, with two different versions operated by two separate services in the U.S. armed forces.

Kalaeloa Airport, also called John Rodgers Field and formerly Naval Air Station Barbers Point, is a joint civil-military regional airport of the State of Hawaiʻi established on July 1, 1999 to replace the Ford Island NALF facilities which closed on June 30 of the same year. Located on the site of the developing unincorporated town of Kalaeloa and nestled between the Honolulu communities of ʻEwa Beach, Kapolei and Campbell Industrial Park in West Oʻahu, most flights to Kalaeloa Airport originate from commuter airports on the other Hawaiian islands. While Kalaeloa Airport is primarily a commuter facility used by unscheduled air taxis, general aviation and transient and locally based military aircraft, the airport saw first-ever scheduled airline service begin on July 1, 2014, with Mokulele Airlines operating flights to Kahului Airport on Maui.

Coast Guard Air Station Kodiak is an Air Station of the United States Coast Guard located in Kodiak, Alaska. The largest in the service's Pacific Area, with a crew of 85 officers and 517 enlisted personnel. The largest Coast Guard Base based on acreage being 23,000 acres. It is a tenant command of Base Support Unit Kodiak, and shares its airfield with Kodiak Airport. The station operates MH-60 Jayhawk and MH-65 Dolphin helicopters, and the HC-130 Hercules fixed-wing aircraft. 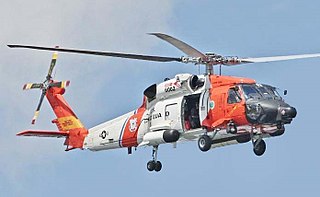 The Sikorsky MH-60T Jayhawk is a multi-mission, twin-engine, medium-range helicopter operated by the United States Coast Guard for search and rescue, law enforcement, military readiness and marine environmental protection missions. It was originally designated HH-60J before being upgraded and redesignated beginning in 2007. 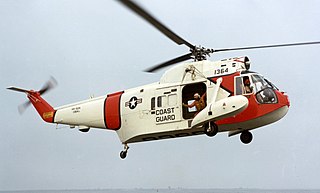 The Sikorsky HH-52 Seaguard was a single turbine engine, three-blade rotor amphibious helicopter. Originally developed as a commercial venture by the Sikorsky Aircraft Corporation of Stratford, Connecticut, it was used by the United States Coast Guard primarily for air-sea rescue. The HH-52 has been replaced by non-amphibious types such as the HH-65 Dolphin, which rely solely on the use of a winch from a low hover to conduct rescue operations. 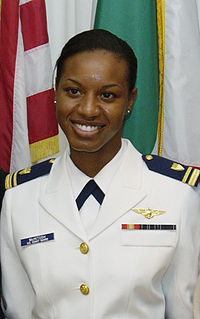 Jeanine McIntosh Menze is a United States Coast Guard officer. She holds the distinction of becoming the first African-American female in the U.S. Coast Guard to earn the Coast Guard Aviation designation.

The 920th Rescue Wing is part of the Air Reserve Component (ARC) of the United States Air Force. The wing is assigned to the Tenth Air Force of the Air Force Reserve Command (AFRC).

The 301st Rescue Squadron is an Air Force Reserve Command unit, part of the 920th Rescue Wing at Patrick Space Force Base, Florida. The squadron operates the HH-60G Pave Hawk helicopter, conducting both peacetime and combat search and rescue missions. As a reserve unit, it is operationally-gained by the Air Combat Command (ACC).

Coast Guard Air Station Corpus Christi is an Air Station of the United States Coast Guard located in Corpus Christi, Texas. The Station is co-located with Sector Corpus Christi offices at Corpus Christi International Airport. The Coast Guard Air Detachment was established on 20 November 1950, and served the entire western Gulf of Mexico with one PBY-5 Catalina fixed wing aircraft, and four pilots. In 1965, the detachment was formally designated USCG Air Station Corpus Christi. Early aircraft consisted of HU-16E Albatross, HH-52A Seaguard helicopter, HC-131 Samaritan, and HU-25A fanjet's. Following extensive personnel and equipment changes in the operations department, the air station became fully operational on October 15, 1980, and operated as one of thirteen Coast Guard Group units between Port O'Connor, Texas and the Mexican border. The Station, maintained a 24-hour Search and rescue capability, with the use of three HH-52A helicopters and three HU-25A fanjets. The Unit averaged over 400 rescues a year, which included searches for overdue vessels, assisting sinking or disabled boats, and medical evacuations from offshore oil rigs. In the spring of 1986 the station's HH-52s were replaced with the Aérospatiale HH-65 Dolphin helicopter. In May 2005 the Coast Guard commissioned Air station Corpus Christi to combine all the units within the area of Port Lavaca to Brownsville under one unified command.

Transair Flight 810 was a night cargo flight from Daniel K. Inouye International Airport in Honolulu, Hawaii, to Kahului Airport on the neighboring island of Maui on July 2, 2021. The Boeing 737-200 freighter, operated by Rhoades Aviation with a crew of two, experienced trouble with both Pratt & Whitney JT8D engines shortly after takeoff, could not maintain altitude, and ditched off the coast of Oahu about 11 minutes after takeoff.