Tripler Army Medical Center (TAMC) is a major United States Department of Defense medical facility administered by the United States Army in the state of Hawaii. It is the tertiary care hospital in the Pacific Rim, serving local active and retired military personnel along with residents of nine U.S. jurisdictions and forces deployed in more than 40 other countries in the region. [1] Located on the slopes of Moanalua Ridge [2] overlooking the Honolulu neighborhoods of Moanalua and Salt Lake, Tripler Army Medical Center's massive coral pink structure can be seen from any point in the Honolulu District. It also serves as headquarters of the Regional Health Command - Pacific. [3]

The main hospital facility is within the Honolulu census-designated place. [4]

Tripler Hospital was established in 1907, housed in several wooden structures within Fort Shafter on the island of Oʻahu. [5] In 1920 it was named after a legendary American Civil War medic, Brevet Brigadier General Charles Stuart Tripler (1806–1866), who made significant contributions to the development of military medicine. [5] [6]

Tripler Army Medical Center was commissioned by Lt. General Robert C. Richardson Jr., [7] who was Military Governor of the Territory of Hawaiʻi during World War II. [8] General Richardson hired the New York City based architectural firm of York & Sawyer to design the medical complex. The local landscape architect Robert O. Thompson designed the landscape to be "one of the great beauty spots of Hawaii", although his plans were never fully realized. [9] [10]

At the outbreak of World War II, Tripler Army Medical Center had a 450-bed capacity which then expanded to 1,000 beds through the addition of barracks-type buildings. Plans for the new Tripler Army Medical Center on Moanalua Ridge were drawn in 1942 and construction was completed in 1948. [5] The original hospital was demolished in 1959 to make way for expansion of Moanalua Road (now Interstate H-201). [6] 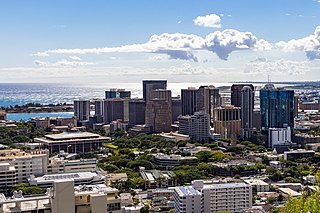 Honolulu is the capital and largest city of the U.S. state of Hawaii, which is located in the Pacific Ocean. It is an unincorporated county seat of the consolidated City and County of Honolulu, situated along the southwest coast of the island of Oʻahu, and is the westernmost and southernmost major U.S. city. Honolulu is Hawaii's main gateway to the world. It is also a major hub for business, finance, hospitality, and military defense in both the state and Oceania. The city is characterized by a mix of various Asian, Western, and Pacific cultures, as reflected in its diverse demography, cuisine, and traditions. 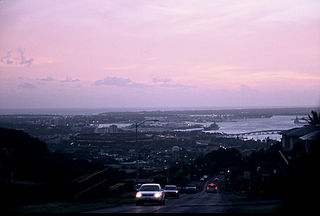 Aiea is a census-designated place (CDP) located in the City and County of Honolulu, Hawaii, United States. As of the 2010 Census, the CDP had a total population of 9,338.

Waimalu is a census-designated place (CDP) in Honolulu County, Hawaiʻi, United States. The population was 13,817 at the 2020 census.

Salt Lake is a neighborhood of Honolulu, Hawaii on the island of O‘ahu. The area is also known as Āliamanu after a nearby crater, although Salt Lake itself is in a crater called Ālia pa‘akai — meaning "salt pond" in the Hawaiian language. The Salt Lake community was developed in the 1960s during a construction boom, providing residents with an expansive view of downtown Honolulu and the sugarcane plantations of the central plain of O‘ahu. It is a community of high-rise condominiums, mid-rise town-dwellings, and houses snaking around the remnants of a now freshwater lake.

Camp H. M. Smith is a United States Marine Corps installation in the Hawaiian town of Aiea on the island of Oahu, near the community of Halawa (ha-la-va) Heights. It is the headquarters of the United States Indo-Pacific Command (INDOPACOM), Special Operations Command Pacific, and Marine Forces Pacific, the Marine service component command of INDOPACOM.

Hawaiʻi Pacific University (HPU) is a private university in Honolulu and Kāneʻohe, Hawaiʻi. HPU is the largest private university in the central Pacific, most noted for its diverse student body of nearly 5,000 students, representing nearly 65 countries. The school's top academic programs are in Business Administration, Nursing, Biology, Diplomacy and Military Studies, and Social Work. 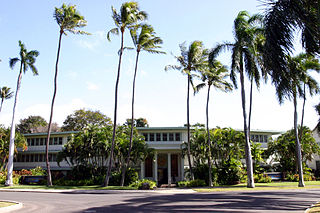 Fort Shafter, in Honolulu CDP, City and County of Honolulu, Hawai‘i, is the headquarters of the United States Army Pacific, which commands most Army forces in the Asia-Pacific region with the exception of Korea. Geographically, Fort Shafter extends up the interfluve (ridgeline) between Kalihi and Moanalua valleys, as well as onto the coastal plain at Māpunapuna. A portion of the area is also known as the Palm Circle Historic District; it is listed on the National Register of Historic Places and has been further designated as a U.S. National Historic Landmark. It is also known as Palm Circle or 100 Area.

Interstate H-201 (H-201) is the only auxiliary Interstate Highway located outside the Contiguous United States, serving the island of O‘ahu in the U.S. state of Hawaii. The H-201 designation is also known as the Moanalua Freeway. The 4.1-mile-long (6.6 km) loop route connects exits 13 and 19 on H-1, passing Fort Shafter, Tripler Army Medical Center, and Red Hill. 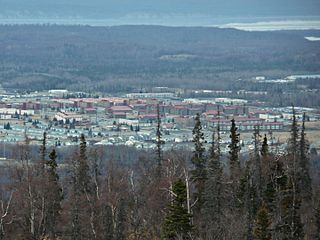 Fort Richardson is a United States Army installation in the U.S. State of Alaska, adjacent to the city of Anchorage. In 2010, it was merged with nearby Elmendorf Air Force Base to form Joint Base Elmendorf-Richardson.

Robert Charlwood Richardson Jr. was born in Charleston, South Carolina, on October 27, 1882, and was admitted as a cadet at the United States Military Academy on June 19, 1900. His military career spanned the first half of the 20th century. He was a veteran of the 1904 Philippine insurrection, World War I, and World War II. He commanded the U.S. Army, Pacific during the height of World War II in 1943 until his retirement in 1946. During that time he was also the military governor of Hawaii and Commanding General of U.S. Army Forces in the Pacific Ocean Areas.

Palm Circle or the Pineapple Pentagon, is a historic portion of Fort Shafter in Honolulu, Hawaii. Designated a National Historic Landmark in 1987, it housed the headquarters of the commanding general and his staff, U.S. Army forces, Pacific Ocean Areas, during World War II. By 1944 this command was responsible for the supply and administration of all U.S. Army personnel in the Central and South Pacific, and from 1943 to 1945, carried out logistical planning for the invasions of the Gilberts, Marshalls, Marianas, Guam, Palau, and Okinawa.

Norman Sakamoto is an American politician who served as a Democratic member of the Hawaii Senate from 1996 to 2010. He represented Hawaii Senatorial District 15, comprising the communities of Aliamanu, Foster Village, Halawa, Hickam, Kalihi, Lower Aiea, Mapunapuna, Moanalua, Pearlridge, and Salt Lake on the island of Oahu. He is a former candidate for Lieutenant Governor of Hawaii.

The South Pacific air ferry route was initially established in the 1920s to ferry United States Army Air Service aircraft to the Philippines. As the Japanese threat in the Far East increased in 1940, General Douglas MacArthur planned that in the event of war, the United States Army Air Corps would play a major role in defending the Philippines. The reinforcement by the Air Corps of forces in the Philippines, and later Allied forces in Australia, became the basis for developing the South Pacific air ferry route used during World War II.

Joseph Caravalho Jr., M.D., is a physician and retired Major General of the Medical Corps of the United States Army. He is currently the president and CEO of the Henry M. Jackson Foundation for the Advancement of Military Medicine. He has held specialized staff medical positions, served in operations at hospitals, and commanded major medical installations across the United States as well as operations in actions overseas. In December 2015, he was appointed as the Joint Staff surgeon, the chief medical advisor to the Chairman of the Joint Chiefs of Staff. 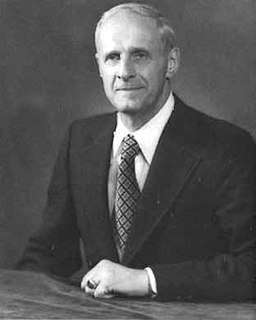 Thomas Matthew "Big Tom" Rienzi was a lieutenant general in the U.S. Army Signal Corps who served during World War II, the Korean War and Vietnam War. He implemented the modernization of signal units from the usage of just wire and radio, through the growth of strategic satellite communications, to the integration of computer systems at even the tactical level.