Conan I of Rennes

Conan was the son of Judicael Berengar, succeeding his father as Count of Rennes in 970. [1]

Conan assumed the title of Duke of Brittany in the spring of 990 following his attack on Nantes and the subsequent death of Count Alan. [2]

As Duke, his rule succeeded the Regency that governed Brittany during the life of Drogo and the fractured rule of Brittany after Drogo's death by his illegitimate brothers Hoël and Guerech, and the latter's son Alan. [3]

The fractured rule over Brittany resulted in a short vacancy in the title Duke of Brittany. Conan I had to ally himself with Odo I, Count of Blois in order to defeat Judicael Berengar before he could assume the title of Duke. [4]

In a charter dated 28 July 990, Conan gave the lands of Villamée, Lillele and Passille to Mont Saint-Michel, all of which later became part of the seigneury of Fougères. [5]

Conan married Ermengarde-Gerberga of Anjou, [lower-alpha 1] [6] in 973, daughter of Geoffrey I, Count of Anjou and Adele of Vermandois. [1]

Conan's alliance with Odo of Blois [3] had helped him defeat Judicael Berengar.

The alliance with Blois eventually became troublesome and he later needed to "rid himself of influence from Blois, [which he accomplished by signing] a pact with Richard I of Normandy; [this pact] established firm Breton-Norman links for the first time." [4]

Richard I had married the daughter of Hugh I the Great, and after this marriage had re-asserted his father's claim as Overlord of the Breton duchy. [4] Conan I's pact with Normandy strengthened that assertion but the historical documentation for that Overlordship claim remains doubtful because it largely appears only in the less than authoritative writings of Dudo of Saint-Quentin. [4] [lower-alpha 2]

Conan died fighting his brother-in-law Fulk Nerra, Count of Anjou at the Battle of Conquereuil on 27 June 992. [7] Conan is buried at Mont Saint-Michel Abbey. [8]

By his wife Ermengarde-Gerberga he had the following issue: 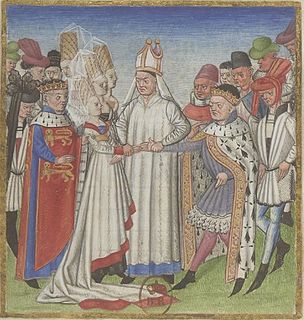 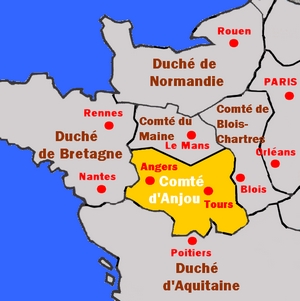 Adela of Vermandois was a French noblewoman. She was Countess of Chalon and later Countess of Anjou.

The Battle of Conquereuil was fought on June 27, 992 AD between the Bretons under Conan I, Duke of Brittany and the Angevins under Fulk the Black.

Ermengarde of Anjou may refer to: 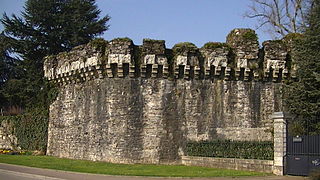 Geoffrey II of Thouars, was the son of Savary III and the viscount of Thouars from 1015 to 1043.