The album was originally destined to be the second release by Candlemass main songwriter Leif Edling's side-project Abstrakt Algebra but, under request from the record label Music for Nations, it was converted in a Candlemass album. There were many musicians involved in the long process of recording, including members of the Abstrakt Algebra's line-up, guitarist Michael Amott of Arch Enemy and Carcass fame and new singer Björn Flodkvist.

The music on the album lacks much of the epic doom sound of previous works and embraces a more experimental and progressive approach, with elements of stoner rock and space rock.

In 2006, it was reissued by GMR Music as a 2 CD edition. The second disc contains the previously unreleased album Abstrakt Algebra II, from which this album's tracks derived.

Candlemass disbanded in 1994, after the release of the EP Sjunger Sigge Furst. [1] Main songwriter and bassist Leif Edling formed a new band called Abstrakt Algebra with singer Mats Levén, drummer Jejo Perkovic, guitarists Mike Wead and Simon Johansson. Abstrakt Algebra released their eponymous debut album of experimental and progressive metal in 1995. [2] The album received some good reviews but was not a commercial success. [1] [2]

Edling composed music for a second more progressive Abstrakt Algebra album and started recording it with a different line-up, [3] which included keyboard player Carl Westholm and guitarist Patrik Instedt replacing Wead and Johansson, at Sunlight Studio, Stockholm, Sweden in the Autumn of 1996. [1] Soon problems emerged with the recording studio and the producer and Edling's finances dried up. [3] Music for Nations, the British label which had issued the previous Candlemass albums, offered Edling to finance further recordings in a different studio if the album was released as a work by Candlemass. [3] Edling, who was on the edge of bankruptcy and a mental breakdown, agreed to this condition and rearranged the songs to adapt them to the heavier doom metal sound of Candlemass. [3] He also composed the new songs "I Still See the Black", "Molotov" and "Karthago" for the album. [1]

His old bandmates declined Edlin's request for collaboration, [1] so he recruited Swedish guitarist Michael Amott, renowned for his work with Carcass, Spiritual Beggars and Arch Enemy and a declared Candlemass fan, to beef up the guitar sound on the tracks. [3] [4] Meanwhile, Levén had joined Yngwie Malmsteen's band and Björn Flodkvist, who Edlin had met while working at Sveriges Radio P3 and coming from the Swedish alternative rock band Gone, was selected as singer. [1]

A band composed by Edling, Amott, Flodkvist, Instedt, Perkovic and Westholm re-recorded during a weekend in May 1997 the basic tracks for the old Abstrakt Algebra songs and for the new compositions "I Still See the Black", "Karthago" and "Wiz" (originally called "Blue Wizard") with the help of session musicians at Swedish Broadcasting Corporation Studio 4 in Stockholm, Sweden. [1] Those three days of recording were Amott's only involvement with Candlemass. [4] Overdubs were added by several other musicians at two other studios of the same city. [1] The final mix, performed by Edling and engineer Uffe Östling, joined the new recordings and more overdubs until after September 1997. [1]

The album took about 18 months to be completed and was released on 13 April 1998 by Music for Nations. [1] The Japanese edition featured the bonus tracks "Container" and "Thirst". [3] The title comes from the plant Dactylis glomerata , the flower of which Edling is allergic to. [3]

Dactylis Glomerata was reissued in 2006 in a 2 CD edition by the Swedish label GMR Music and by Peaceville Records in 2008. The second disc contains the Abstrakt Algebra sessions recorded by the band in 1996 and extensive liner notes by Edling. [3]

Dactylis Glomerata received positive reviews, but was a commercial failure. Canadian journalist Martin Popoff praised the "trippy, not cheesy" production and Björn Flodkvist's vocals, considering the album "closer to stoner rock than self-serious doom". [5] Rock Hard reviewer remarked how different the sound of Dactylis Glomerata is in comparison with the "classic" first four Candlemass albums, lacking "their anthemic, epic arrangements", "the theatrical element, which has always characterized the vocals of Messiah" (Marcolin), and featuring elements of space rock in several tracks like the "monumental 'Dustflow'". [6]

All tracks are written by Leif Edling. 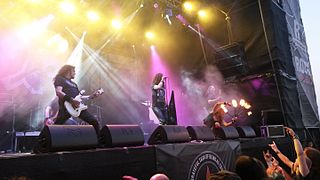 Michael Amott is a Swedish guitarist, founding member of the metal bands Arch Enemy, Spiritual Beggars and Carnage, as well as a former member of Carcass. He is the older brother of Christopher Amott. Some major influences in his music have been Tony Iommi, Michael Schenker, Uli Jon Roth and Dave Mustaine.

Leif Edling is a Swedish musician, best known as the main songwriter, bass player and one of the founding members of the epic doom metal band Candlemass. He is the only constant member of the band since its inception to the present day. Nevertheless, since the band's second reunion in 2002 Edling has been backed up again by founding rhythm guitarist Mats Björkman, who had been absent from 1997 to 2002 and was replaced by Michael Amott. 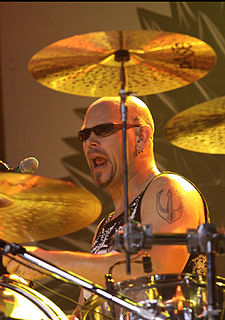 Abstrakt Algebra was a Swedish experimental metal band with influences from power metal and doom metal. It was founded by bassist Leif Edling in 1994, shortly after his main project Candlemass split up. 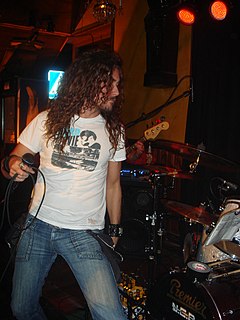 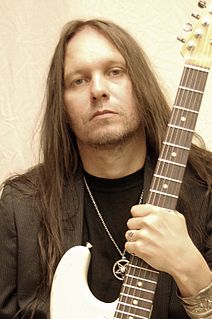 Mike Wead, is a Swedish guitarist who lives in Stockholm. Wead contributed to heavy metal bands such as Hexenhaus, Memento Mori, Abstrakt Algebra, The Haunted, Edge of Sanity, Candlemass, The Project Hate. Currently Wead is the guitarist of Mercyful Fate, King Diamond, and bibleblack. 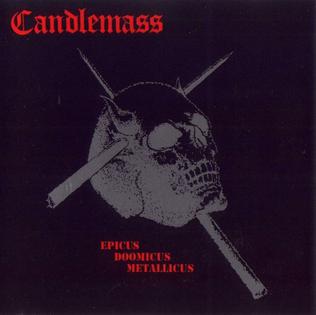 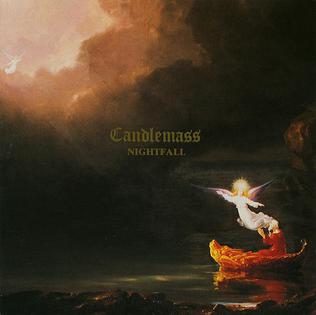 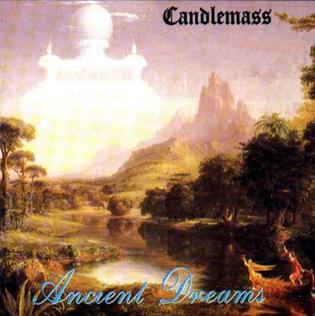 Ancient Dreams is the third album of Swedish doom metal band Candlemass, released in 1988 and reissued in 2001 by Powerline Records with a bonus CD. The cover art of the album is a painting made by Thomas Cole, second in his series, "The Voyage of Life", entitled "Youth". Ancient Dreams was the first Candlemass album to chart in the US, debuting at No. 174 on the Billboard 200 album chart. 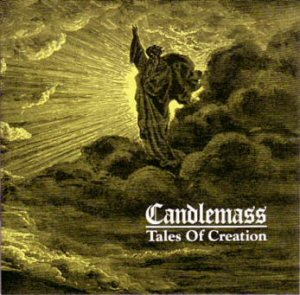 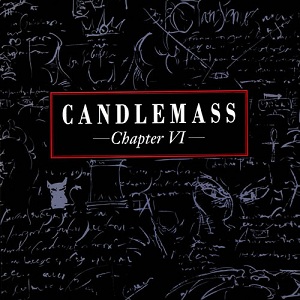 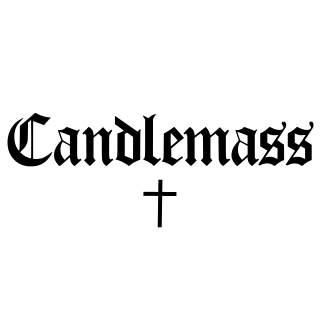 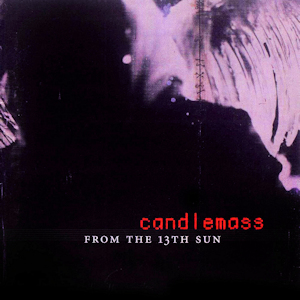 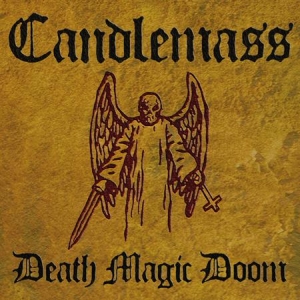 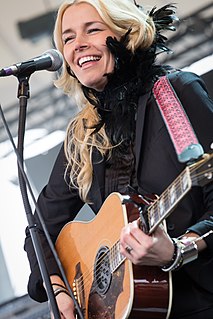 "Solitude" is a song by the Swedish doom metal band Candlemass. It is the opening track on the band's debut studio album, Epicus Doomicus Metallicus, released in June 1986. It is one of the band's signature songs, and has been a feature of all the band's live setlists since the release of the album.