The Chaplain-General of Prisons is the head of the Church of England's chaplaincy to prisons. He is also an ex officio member of the House of Clergy of the General Synod.

Fleming was educated at King Edward VII School, King's Lynn and Kelham Theological College. After National Service with the Royal Norfolk Regiment he was ordained in 1963. [3] After curacies in Liverpool and Sandringham he was Vicar of Great Staughton and Chaplain of HM Borstal, Gaynes Hall from 1968 to 1976 (and Rural Dean of St Neots from 1972 to 1976. He was Vicar of Whittlesey and Rural Dean of March from 1977 to 1982. He was Priest in charge of Pondersbridge from 1983 to 1985 and Vicar of Wisbech from 1985 to 1988. He was an Honorary Canon of Ely Cathedral from 1982 to 2001.

Christopher Russell Campling is a retired Anglican priest who was the Dean of Ripon.

Henry Leslie Williams was Archdeacon of Chester from 1975 to 1988. 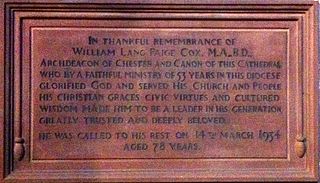 William Lang Paige Cox was Archdeacon of Chester from 1914 until his death in 1934.

John Robert Gathercole was Archdeacon of Dudley from 1987 until 2001.

The Ven. Henry Edward FitzHerbert, MA was Archdeacon of Derby from 1943 to 1952.

The Ven. Thomas Barfett, MA was Archdeacon of Hereford and a Canon Residentiary at Hereford Cathedral from 1977 to 1982.

Benjamin George Burton Fox, was a British Anglican priest and military chaplain. He was Archdeacon of Wisbech in the Diocese of Ely from 1964 until his death.

The Ven. Percival Leonard Ashford was Chaplain-General of Prisons from 1981 to 1985.

The Ven William Alexander Noblett, CBE is an Anglican priest and author: he was Chaplain-General of Prisons from 2001 to 2011.

The Very Reverend Brian Albert Hardy was Dean of Edinburgh from 1986 to 1991.

Timothy Reed "Tim" Barker is a British Anglican priest. Since 2015, he has served as the Dean of Guernsey. From 2009 to 2015, he was the Archdeacon of Lincoln in the Diocese of Lincoln.

The Very Rev Nicholas Ayles Stillingfleet Bury is an Anglican priest: he was Dean of Gloucester from 1997 until 2010.

Robert Meiklejohn was Archdeacon of Norwich from 1954 to 1961.

David Frank Hayden was Archdeacon of Norfolk from 2002 until 2012.

Louis John Baggott was an Anglican priest and author.