Rolleston on Dove, also known simply as Rolleston, is a village in Staffordshire, England near Burton upon Trent. Sir Oswald Mosley, the founder of the British Union of Fascists spent some of his earlier years at the family seat here. Rolleston Hall, where Mosley lived, was sold by auction on 2 August 1923 for housing development. The lake and two of the entrance lodges remain. The family coat of arms are still displayed in what was originally the Victorian Commemoration Hall which is now Rolleston Club.

The Archdeacon of Taunton has been, since the twelfth century, the senior ecclesiastical officer in charge of the archdeaconry of Taunton in the Diocese of Bath and Wells. The archdeaconry includes seven deaneries.

Sherborne was a patron of the artist Lambert Barnard, commissioning several series of paintings from him. [7] [8] He founded the Free Grammar School in Rolleston, around 1520, [9] which continued to 1909. [10]

John Doget was an English diplomat, scholar and Renaissance humanist. He was the nephew of Cardinal Thomas Bourchier, Archbishop of Canterbury. He was born in Sherborne, Dorset, and was probably educated in Bourchier's household before being admitted to Eton College as a king's scholar about 1447. From Eton he passed to King's College, Cambridge, in 1451, and became a fellow there in 1454.

Christopher Bainbridge was an English Cardinal of the Roman Catholic Church. He served as Archbishop of York from 1508 until his death.

Richard Mitford was an English bishop of Chichester from 17 November 1389, and consecrated on 10 April 1390 and then bishop of Salisbury. He was translated to the see of Salisbury on 25 October 1395.

Thomas Jane was a medieval Bishop of Norwich. 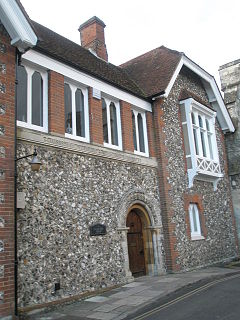 The post of Archdeacon of Chichester was created in the 12th century, although the Diocese of Sussex was founded by St Wilfrid, the exiled Bishop of York, in AD 681. The original location of the see was in Selsey. The see was moved to Chichester, in about 1075, by decree of the Synod of London. Currently, Luke Irvine-Capel is the Archdeacon.

Antonio Trivulzio the Elder (1457–1508) was an Italian Roman Catholic bishop and cardinal.