Justinian Lancaster (born c. 1524) was an English Anglican priest in the 16th century. [1]

Lancaster was educated at Corpus Christi College, Oxford, where he was admitted in 1541 and became a fellow in 1545. [2] He held livings at Enmore, Huish Champflower, Chawton, Donyatt, Yatton and Churchstanton. Lancaster was Archdeacon of Taunton from 1560 until 1584, [3] when he was appointed a prebendary of Wells Cathedral. [2] 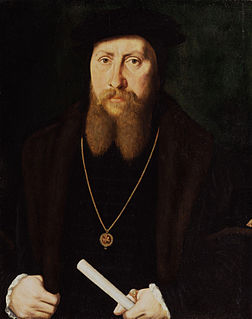 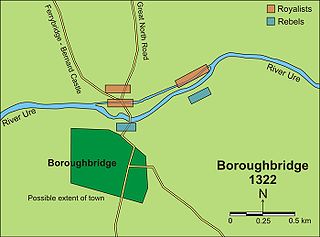 The Battle of Boroughbridge was fought on 16 March 1322 in England between a group of rebellious barons and the forces of King Edward II, near Boroughbridge, north-west of York. The culmination of a long period of antagonism between the King and Thomas, Earl of Lancaster, his most powerful subject, it resulted in Lancaster's defeat and execution. This allowed Edward to re-establish royal authority and hold on to power for almost five more years.

Andrew Harclay, 1st Earl of Carlisle, alternatively Andreas de Harcla, was an important English military leader in the borderlands with Scotland during the reign of Edward II. Coming from a knightly family in Westmorland, he was appointed sheriff of Cumberland in 1311. He distinguished himself in the Scottish Wars, and in 1315 repulsed a siege on Carlisle Castle by Robert the Bruce. Shortly after this, he was taken captive by the Scots, and only released after a substantial ransom had been paid. His greatest achievement came in 1322, when he defeated the rebellious baron Thomas of Lancaster at the Battle of Boroughbridge on 16–17 March. For this he was created Earl of Carlisle. 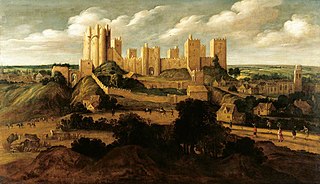 PontefractCastle is a castle ruin in the town of Pontefract, in West Yorkshire, England. King Richard II is thought to have died there. It was the site of a series of famous sieges during the 17th-century English Civil War. 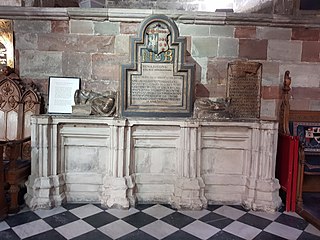 The House of Plantagenet was a Royal house which originated from the lands of Anjou in France. The family held the English throne from 1154 to 1485, when Richard III died in battle.

Deane is an area of Bolton, in Greater Manchester, England. It is about 2 miles (3.2 km) south west of Bolton and 11 miles (17.7 km) northwest of the city of Manchester.

Giles Lawrence, DCL was an English Anglican priest in the 16th century.