Last updated June 06, 2022
Not to be confused with John Hind (Bishop in Fukien).

John William Hind (born 19 June 1945) is an Anglo-Catholic theologian and former Bishop in Europe and Bishop of Chichester in the Church of England.

Hind was born in Watford, Hertfordshire, on 19 June 1945. He attended Watford Grammar School for Boys and went to Leeds University where he studied theology before teaching in a secondary school and a college of education. Hind trained for ordination at Cuddesdon College. [1]

Hind was ordained in Southwark Cathedral in 1972. After parish ministry in the Diocese of Southwark; St John's Catford as a curate (1972–76) and Christ Church, Forest Hill as vicar (1976–82), Hind was appointed the Principal of Chichester Theological College in 1982. [1]

Hind became the area (and suffragan) Bishop of Horsham in the Chichester diocese in 1991 and in 1993 became the Bishop in Europe ("Bishop of Gibraltar in Europe" in full). [1]

On the retirement of Eric Kemp in 2001 after 26 years as Bishop of Chichester, Hind succeeded him in the see which had included Wilfrid, Richard of Chichester, Lancelot Andrewes, and George Bell as its bishops.

In 2008 a priest in his diocese was convicted for historic child sex abuse, and a subsequent review by Baroness Butler-Sloss for the Church of England was critical of senior clergy for being slow to act on information available to them. [2] In 2011 the Archbishop of Canterbury appointed an enquiry into the long running child protection issues in the diocese. The interim enquiry report found that there had been "an appalling history" over two decades of child protection problems, and many children had suffered hurt and damage. Because of concerns that safeguarding still remained dysfunctional, Lambeth Palace took over the oversight of clergy appointments and the protection of children and vulnerable adults in the diocese. [3] [4]

On 7 July 2011, Hind announced his intention to retire in April 2012. [5] [6] He duly retired effective 30 April 2012 – his suffragan Mark Sowerby became Acting Bishop of Chichester (since the senior suffragan in the diocese, Wallace Benn was involved with an ongoing investigation into diocesan safeguarding procedures) and his successor (Martin Warner, Bishop of Whitby) was announced three days later.

On 28 May 2012 Hind was licensed as an honorary assistant bishop in the Diocese of Portsmouth. [7]

Hind belongs to the traditionalist Anglo-Catholic wing of the Church of England. [8]

Although the Diocese of Chichester includes the city of Brighton and Hove, which has a disproportionately high percentage gay population,[ citation needed ] Hind has a history of opposition to initiatives such as (and including) civil partnership. He has signed a petition organised by the Coalition for Marriage, opposing same-sex marriage. [9]

Hind was also one of the bishops who signed a letter against Rowan Williams' decision not to block the appointment of Jeffrey John as Bishop of Reading in 2003, due to John being a self-identified homosexual. The other diocesan bishop signatories (referred to by their opponents, since there were nine, as the Nazgûl ) were: Michael Scott-Joynt (Bishop of Winchester), Michael Langrish (Exeter), Michael Nazir-Ali (Rochester), Peter Forster (Chester), James Jones (Liverpool), George Cassidy (Southwell & Nottingham), Graham Dow (Carlisle) and David James (Bradford). [10]

In October 2009, the Sunday Telegraph claimed that Hind had said that he would be happy to be reordained as a priest in the Roman Catholic Church and that divisions in Anglicanism could make it impossible for him to stay in the Church of England. [11] In a statement published in response to this article, Hind stated that this "is not the case" and "that I would not be willing to deny the priesthood I have exercised hitherto." [12]

Peter Bryan Price is a retired English Anglican bishop. He was the Bishop of Bath and Wells in the Church of England from 2001 to 30 June 2013. He sat in the House of Lords as one of the Lords Spiritual from 2008 until his retirement. Currently he chairs the board of trustees for the NGO Conciliation Resources. 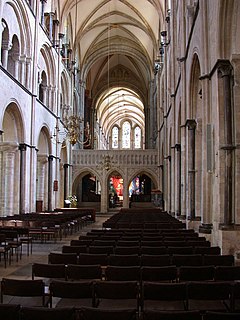 The Diocese of Chichester is a Church of England diocese based in Chichester, covering Sussex. It was founded in 681 as the ancient Diocese of Selsey, which was based at Selsey Abbey, until the see was translated to Chichester in 1075. The cathedral is Chichester Cathedral and the diocesan bishop is the Bishop of Chichester. The diocese is in the Province of Canterbury.

Peter Robert Forster is a British former Anglican bishop. He was Bishop of Chester in the Church of England from 1996 and a Lord Spiritual from 2001 until his retirement in 2019. He was received into the Roman Catholic Church in 2021.

James Stuart Jones is a retired Church of England bishop. He was the Bishop of Liverpool between 1998 and 2013. 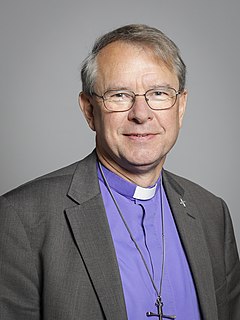 Paul Roger Butler is the bishop of Durham in the Diocese of Durham. His election was confirmed on 20 January 2014 and he was installed and enthroned in Durham Cathedral on 22 February 2014. On 12 September 2013 it was announced that he had been appointed as bishop-designate of Durham He was previously bishop of Southwell and Nottingham. He was installed at Southwell Minster on 27 February 2010. He served as the suffragan bishop of Southampton in the Diocese of Winchester from 2004 until 2010.

Clive Young was a Church of England bishop. From 1999 to 2013, he was the Anglican Bishop of Dunwich, a suffragan bishop in the Diocese of St Edmundsbury and Ipswich.

David Peter Wilcox is a retired British Anglican bishop. He was the Bishop of Dorking, a suffragan bishop in the Diocese of Guildford.

Wallace Parke Benn is a bishop of the Church of England. He was the area Bishop of Lewes in the Diocese of Chichester from 1997 until his retirement in October 2012.

David Charles James is a retired Anglican bishop. He was formerly the Bishop of Bradford in the Church of England.

Glyn Hamilton Webster is a retired Anglican bishop who was the Bishop of Beverley from 2013 to January 2022. He was previously the canon chancellor and Acting Dean of York at York Minster in the Diocese of York.

Nicholas McKinnel is an English Anglican bishop. He has been the Bishop of Plymouth, a suffragan bishopric in the Diocese of Exeter, since 2015. He was the suffragan Bishop of Crediton in the same diocese from 2012.