The Diana fritillary (Speyeria diana) is a fritillary butterfly found in several wooded areas in southern and eastern North America (primarily in the Arkansas River valley, several counties in South Carolina, and spots along the Appalachian mountain range). The species exhibits marked sexual dimorphism, with males of the species exhibiting an orange color on the edges of their wings, with a burnt orange underwing. Females are dark blue, with dark, almost dusty underwings, and are also larger than males. [2] 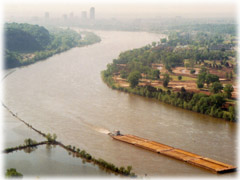 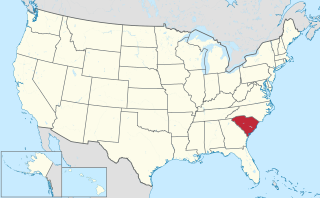 The larvae feed on violet leaves. Dianas are unusual in that they do not lay their eggs directly on the host plant, instead scattering the eggs around the base of the plant. Upon hatching, larvae burrow into the ground over winter to emerge in spring. Adults feed on flower nectar and dung. [2]

On February 28, 2007, Act 156 of the Arkansas General Assembly designated the Diana fritillary as the official state butterfly. Introduced by Representative John Paul Wells of Logan County, the legislation for making the butterfly a state symbol took note of the butterfly's beauty, educational importance, and impact on tourism. Arkansas is the only state to designate the Diana fritillary as its state butterfly; pairing it with its state insect, the honeybee. Arkansas is the twenty-sixth state to designate a butterfly as a state symbol. [3]

Speyeria zerene, the zerene fritillary, is a species of butterfly found in the western portions of the United States and Canada.

Fabriciana adippe, the high brown fritillary, is a large and brightly colored butterfly of the family Nymphalidae, native to Europe and across the Palearctic to Japan. It is known for being Great Britain's most threatened butterfly and is listed as a vulnerable species under the Wildlife and Countryside Act 1981. Like other fritillaries it is dependent on warm climates with violet rich flora.

The Niobe fritillary is a species of butterfly in the family Nymphalidae. 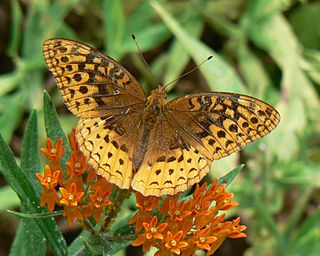 The great spangled fritillary is a North American butterfly of the family Nymphalidae. 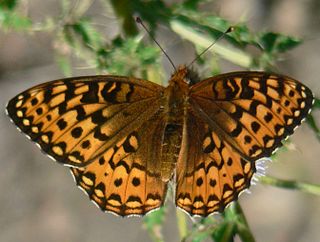 Speyeria hydaspe, the Hydaspe fritillary, is a species of orange-brown butterfly found in the western portions of the United States and Canada. A small fritillary, it usually has cream-colored underwing spots, but the Vancouver Island subspecies has silver spots. It is similar to S. zerene and S. atlantis, but may be distinguished by the smooth and even appearance of its postmedian spotband. The caterpillars feed on violets including Viola glabella. A single brood flies from July through September and feeds on flower nectar. They may be found in moist forests, in clearings and subalpine meadows.

The callippe silverspot butterfly is a federal endangered species in the brush-footed butterfly family Nymphalidae. This is a subspecies. It is a member of the Heliconiinae, the subfamily known as longwings. The adult has a wingspan of just over two inches. The wings are eyecatching with a brown, tan, and black scalloped pattern on their surfaces and orange-brown with characteristic silver spots on the undersides. The wings and abdomen are hairy. The larvae are spiny, dark-colored caterpillars.

The regal fritillary is a striking nymphalid butterfly found among some of the remaining tallgrass and mixed-grass prairies in the east-central United States. This prairie-specialist butterfly has a characteristic deep orange color and unmistakable dark hindwings with two bands of spots. On the female, both bands of spots are white. However, on the male, the outer band of spots is orange in color. Females also tend to be slightly larger than males. The ventral surface of the hindwings is olive brown to black in color with bold silvery white spots. The wingspan of S. idalia usually measures 68–105 millimetres (2.7–4.1 in). Flight is in the summertime from approximately June to September and adults tend to be swift in flight, coasting close to the ground. It is listed as a species of special concern and believed extirpated in the US state of Connecticut. 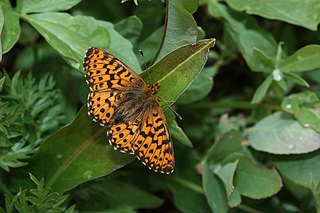 Boloria chariclea, the Arctic fritillary or purplish fritillary, is a butterfly of the family Nymphalidae. It is found in the northern part of the Palearctic ecozone and the Nearctic ecozone.

Speyeria, commonly known as greater fritillaries, is a genus of butterflies in the family Nymphalidae commonly found in North America, Europe, and Asia. Some authors used to consider this taxon a subgenus of Argynnis, but it has been reestablished as a separate genus in 2017. 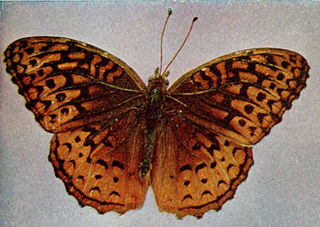 The Aphrodite fritillary is a fritillary butterfly, from North America.

Speyeria atlantis, the Atlantis fritillary, is a butterfly of the family Nymphalidae of North America. It is from the Avalon Peninsula of Newfoundland and Labrador to northern British Columbia, across the northern United States south as far as Colorado and West Virginia. It resides as far north as James Bay. The species is listed as endangered in Connecticut.

Speyeria edwardsii, the Edwards' fritillary, is a butterfly of the family Nymphalidae of North America. It is common from Alberta west to Manitoba and south as far as northern New Mexico.

Speyeria coronis, the Coronis fritillary, is a butterfly of the family Nymphalidae of North America. It is common from Baja California to Washington and east to Colorado and western South Dakota and once reported in Alberta.

Speyeria mormonia, commonly known as the Mormon fritillary, is a North American butterfly belonging to the family Nymphalidae. It is highly diverse, having differentiated into several subspecies which occupy a wide geographic range. S. mormonia exhibits extreme protandry, which is the emergence of male adults before female adults. This has several consequences on male and female behavior. Habitat specificity is still being investigated, as there are few known environmental predictors, and S. mormonia appears to be associated with a wide range of habitats. This species is not under threat, and conservation efforts are generally not necessary.

Speyeria adiaste, the unsilvered fritillary or adiaste fritillary, is a species of butterfly of the family Nymphalidae. It is found in California north to San Mateo County and east to north Los Angeles County and Kern County. 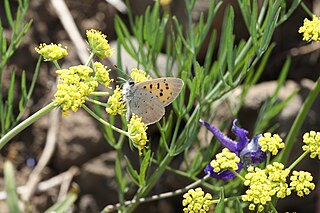 Lycaena rubidus, the ruddy copper, is a butterfly of the family Lycaenidae. It is found in the western mountains of North America. Adults lay their eggs on plants of the genus Rumex, which later become the larval food plants. This butterfly gets its name from the brightly colored wings of the males, which are important in sexual selection. Its larvae exhibit mutualism with red ants, and are often raised in ant nests until they reach adulthood. Adults are on wing from mid-July to early August.

Speyeria egleis, commonly known as the Great Basin fritillary or egleis fritillary, is a butterfly of the family Nymphalidae. It is found in North America, where it has been recorded from North Dakota southwest through Oregon to California and south to Colorado. The habitat consists of mountain meadows, forest openings and exposed rocky ridges.