Cook was educated at Maidstone Grammar School, Queens' College, Cambridge and Ridley Hall, Cambridge. After a curacy at Holy Trinity, Margate he was a CMS Missionary in Western China until 1926. [2] After that he held incumbencies in Dover, Margate and Folkestone. [3] He was Rector of Bath Abbey from 1947 to 1960.

Sir Arthur Lawrence Hobhouse was a long-serving English local government Liberal politician, who is best remembered as the architect of the system of national parks of England and Wales.

Arthur Creyke England was an Anglican clergyman in the first half of the twentieth century.

Arthur White was the Archdeacon of Warrington from 1947 until 1958.

Arthur Hopley was a senior Anglican priest in the second half of the twentieth century. 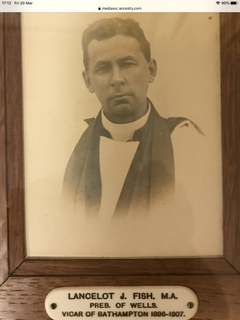 Lancelot John Fish was Archdeacon of Bath from 1909 until his death on 29 September 1924.

Louis John Baggott was an Anglican priest and author.

Arthur Crompton Moore was Archdeacon of Norfolk from 1934 until his death.

Hubert Arthur Stanley Pink was Archdeacon of Hampstead from 1964 to 1974.

Arthur Deane Gilbertson, was a Church of England priest and former Royal Navy chaplain. He was Chaplain of the Fleet, Director General of the Naval Chaplaincy Service, Archdeacon for the Royal Navy and an Honorary Chaplain to the Kingfrom 1935 to 1938.

Edwin Arthur Salmon was a British Church of England priest, most notably Archdeacon of Wells from March 1898 until his death.

John Carpenter Turner was Archdeacon of Basingstoke from 1927 until 1947.

John Kiddle is an Anglican priest: in September 2015 he was appointed Archdeacon of Wandsworth.